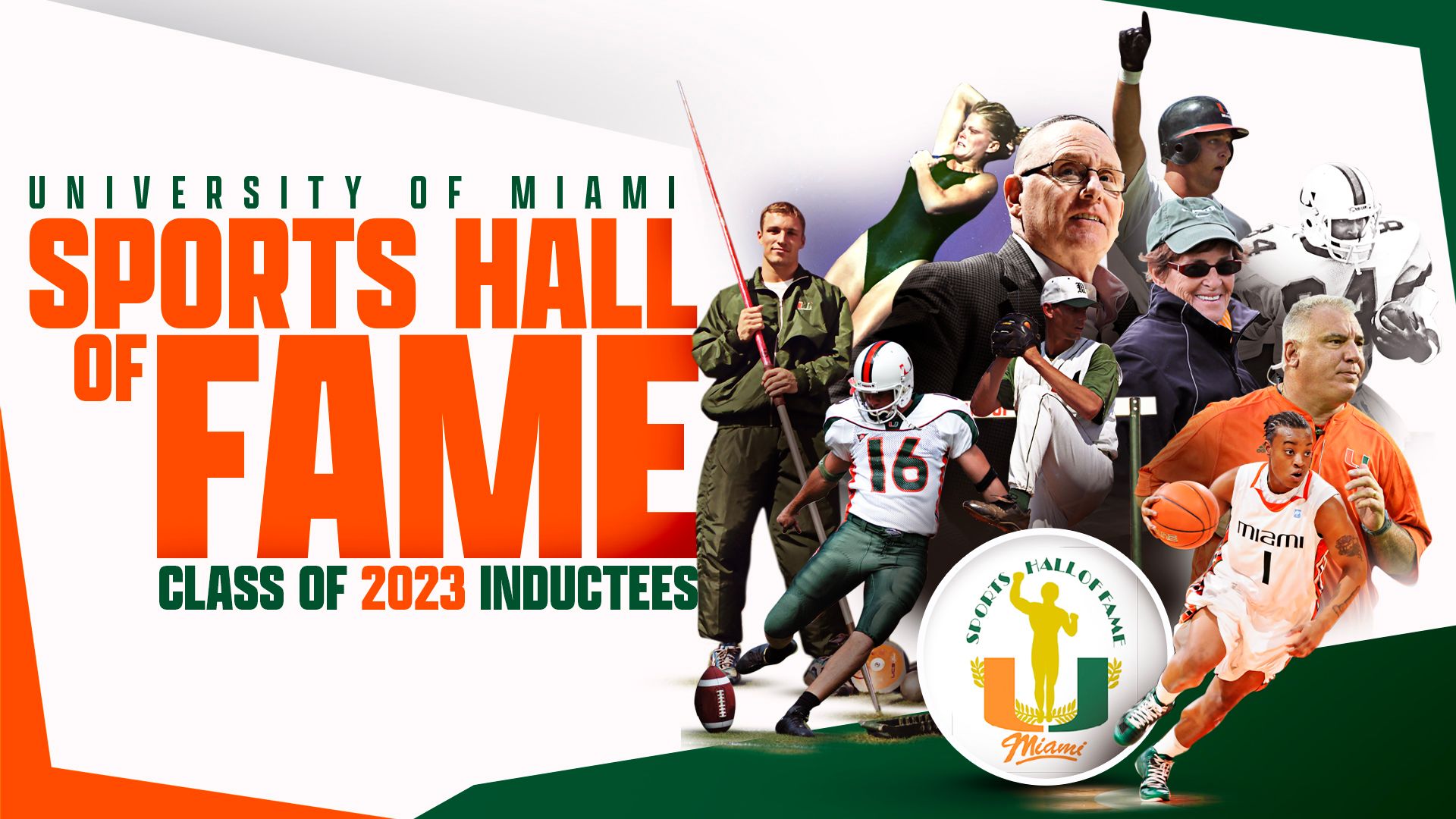 “We are so honored to induct the UM Sports Hall of Fame’s Class of 2023, comprised of world class athletes, coaches and a sports administrator,” UMSHoF President Mead McCabe said. “We will celebrate this diverse class and their outstanding accomplishments at our induction banquet in the spring of 2023. We invite all Canes Fans to join us in welcoming the Class of 2023.”

This year’s class will be formally introduced during an on-field ceremony at the Miami-Duke football game this Saturday, October 22 at Hard Rock Stadium as part of the “Hall of Fame Game” ceremonies.

The 54th UMSHoF induction Banquet will be held in the spring of 2023 at a site to be announced soon. For information on the banquet or the Hall of Fame’s other events, visit UMSportsHallofFame.com or contact the UMSHoF at 305-284-2775.

The University of Miami Sports Hall of Fame is a non-profit organization founded in 1966 by eight Miami-Dade County Circuit Court judges, all University of Miami alumni. The founders wanted to establish an organization that would recognize those student-athletes, coaches and administrators who excelled at their sport and brought acclaim to the University through their achievements and championships. With the addition of the Class of 2023, only 354 honorees have been inducted into the UM Sports Hall of Fame in the University’s nearly 100-year history.

Kevin Brown (Baseball, 1998-2001)
One of baseball’s true power hitters, Brown ranks fourth all-time with 48 home runs and is tied for seventh with 187 career runs batted in. His 22 home runs in 1999 is tied for fourth most in school history in a single season. He is tied for fifth in career slugging percentage (.637). A two-time national champion on Coach Jim Morris’ 1999 and 2001 squads, Brown saved his best for the biggest moment. After struggling through injuries as a junior and most of his senior year, he erupted for seven home runs during postseason play, leading the Canes to the 2001 College World Series title.

Lela Cannon (Golf Coach, 1984-2010)
Cannon coached the Miami women’s golf program for 27 seasons and led the Canes to the NCAA tournament in 17 of those campaigns, claiming the 1984 national championship in her first season. She coached 11 All-Americans and seven Academic All-Americans, including three current UM Sports Hall of Fame members (Penny Hammel, Tina Miller Lloyd and Tracy Kerdyk, the 1988 NCAA Player of the Year), Cannon was a two-time Southeastern Region Coach of the Year (1984, 1992), won five state championships and was inducted into the National Golf Coaches Hall of Fame in 2002.

David Gil (Baseball, 1997-2000)
One of Coach Jim Morris’ most reliable pitchers for his first national championship team, Gil ranks 10th all-time in career victories at UM with 31. In the 1999 championship season, he posted a 12-0 record with a 3.19 earned run average and was named the Division I Independent Pitcher of the Year. Although drafted after the 1999 season, he returned to Coral Gables and posted an 11-3 record and was named a second-team All-American in 2000 by Louisville Slugger/Collegiate Baseball.

Jim Larrañaga (Basketball Coach, 2011-Present)
Larrañaga is the winningest coach in UM men’s basketball history with 226 victories over 11 seasons. He has led the Canes to three of the programs four Sweet 16 appearances, including the school’s only Elite Eight finish in 2022. He also led Miami to the Atlantic Coast Conference (ACC) regular season title and ACC Tournament Championship in 2013. A two-time ACC Coach of the Year (2013, 2016), Larrañaga was named the 2013 Associated Press (AP) College Coach of the year, the Naismith College Coach of the Year and the USBWA Henry Iba Award and Adolph Rupp Cup award winner as National Coach of the Year. He has led Miami to seven 20-win seasons — including 29 wins in 2013, the most in school history. Larrañaga is the only coach in NCAA history with 100-plus conference wins at three Division I schools.

Aaron Moser (Track & Field, 1996-2000)
One of the finest all-around athletes in UM history, Moser was a three-time Big East Conference decathlon champion (1998, 1999, 2000) and a two-time Big East heptathlon champion (1999, 2000). He was named an All-American in 2000 in the decathlon and set a Big East record for points in the decathlon. He still holds Miami records in the indoor pentathlon, heptathlon and decathlon. Moser also was a three-year letterman on the Canes football team and was named Special Teams Player of the Year twice (1999, 2000).

Vinny Scavo (Assistant Athletic Director/Athletic Training, 1983-1987, 2008-Present)
Vinny Scavo is one of the most respected athletic trainers in the country. He started his UM career serving as head baseball trainer for legendary Coach Ron Fraser from 1983-1987, including the 1985 national championship season. After stints that included working for the Florida Marlins and several high schools in South Florida, he returned to The U in 2008 as director of sports medicine services and head athletic trainer at the University of Miami Miller School of Medicine before returning to work in the athletic department in 2011 as head football trainer. He currently serves as Associate Athletic Director for Athletic Training and oversees the healthcare of all the university’s student-athletes and teams, working closely with the team doctors and each sport’s athletic trainer.

Todd Sievers (Football, 1998, 2000-2002)
One of the greatest kickers in Miami school history, Sievers was a two-time, first-team All-Big East selection and a 2001 first-team All-American (CNNSI.com). He was a second-team All-America selection by The Sporting News and ABC Sports that same year as he helped lead the Canes to the national championship. He is fourth in career points scored (310) at Miami and holds the second and seventh-best single-season totals for points scored. Sievers was a finalist for the Lou Groza Award in 2001 as the nation’s best placekicker and a finalist for the Mosi Tatupu Award as the nation’s top special teams player in 2002.

Willie Smith (Football, 1984-1985)
In 1985, Smith was a consensus first-team All-America selection (Associated Press, Kodak, Walter Camp) at tight end. He accumulated 114 catches for 1,544 yards and six touchdowns in his two seasons with the Canes. His 66 receptions in 1984 set a then-school record for single-season receptions in a season, a mark that lasted for 26 years. Smith’s 12 receptions against Maryland in 1984 was also a single-game school record until 2021.

Riquna Williams (Basketball, 2008-2012)
Williams, known affectionately to Canes fans as “Bay Bay,” was a two-time first-team All-ACC selection in 2011 and 2012 and was named a third-team All-American by the Associated Press after her senior campaign. Her 2,148 career points ranks fifth all-time at Miami and her 17.2 points per game average ranks eighth. She holds school career records for 3-point field goals made (272), field goal attempts, and 3-point attempts, as well as season records for 3-point field goals made and attempted. Williams recently won the WNBA title with the Las Vegas Aces.