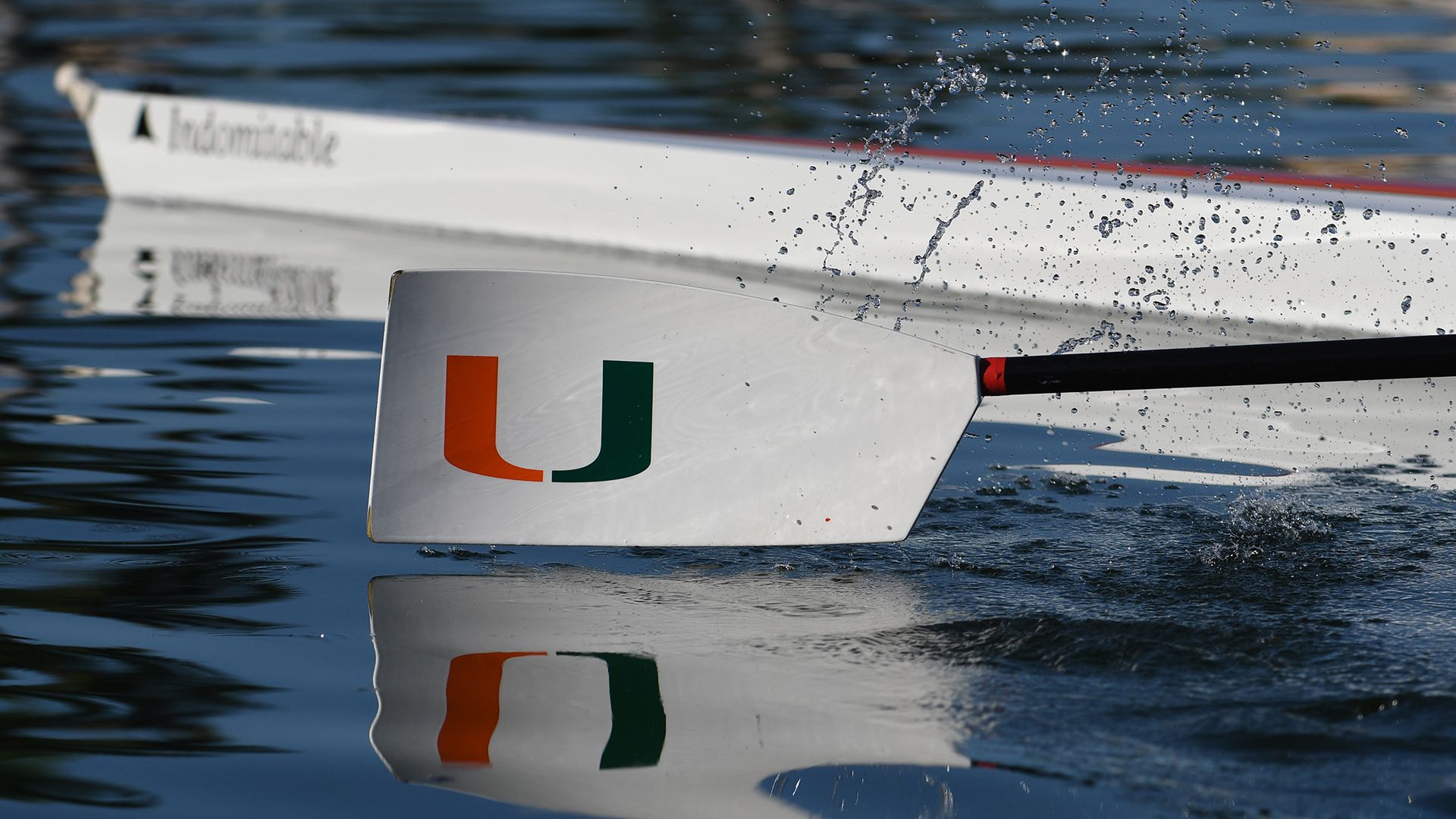 “I’m very excited to have such a talented staff on-board for 2022-23. Myself, our athletes, and our department rightfully have high expectations for our rowing team this year and beyond, and I am confident that we have the right staff in place to help us achieve our goals,” Mulcahy said. “They are excellent teachers of the sport but also passionate about the athletes’ wellbeing outside the boats as well. It’s a great time to be a part of Canes Rowing.” 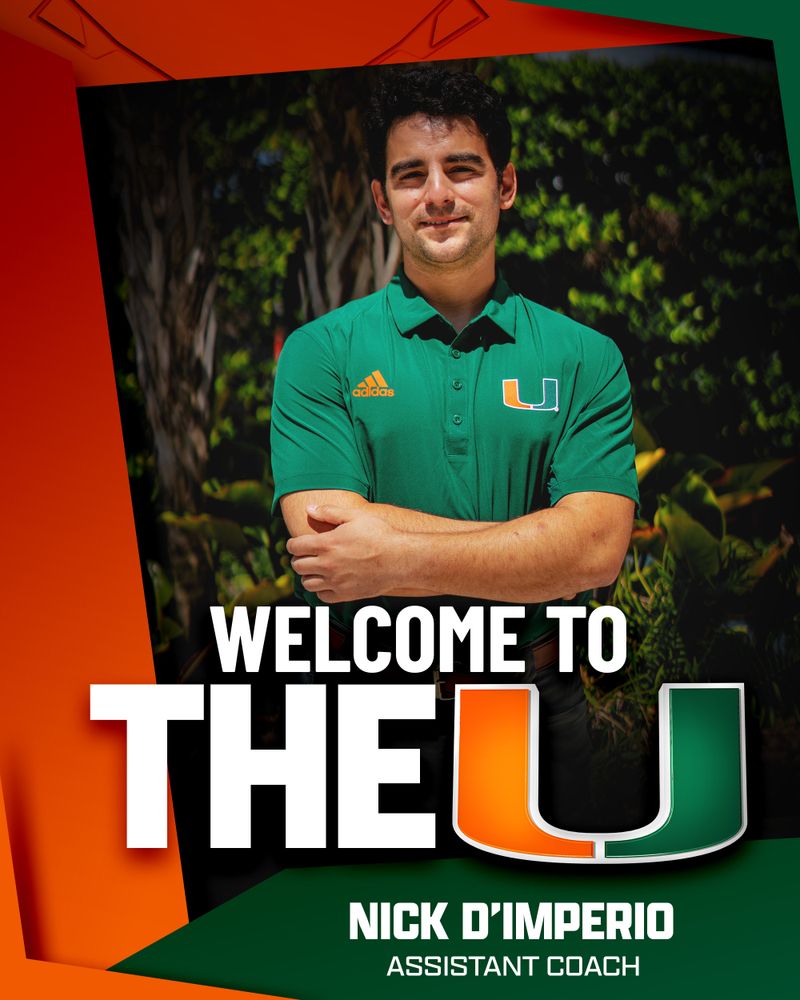 D’Imperio joins the staff as an assistant coach after spending a year at the University of Oklahoma in the same role under Leeanne Crain. At Oklahoma, D’Imperio was primarily responsible for coaching the Second Varsity 8 and managing the program’s data collection and performance tracking.

D’Imperio got his start in the coaching world while he was an undergraduate student at Penn State University. While there, he competed and coached for the club rowing program, while earning a Bachelor of Science in Mining Engineering. He earned his master’s degree in Leadership and Management at Oklahoma City University, where he also served as the Graduate assistant coach for the men’s rowing team.

D’Imperio originally hails from Lansdowne, Pa., a close suburb to Philadelphia. He began his rowing career at Monsignor Bonner High School, rowing out of the Penn AC Rowing Association.

“Nick brings an excellent track record here with him from both the club and collegiate levels,” Mulcahy said. “Not only do I trust Nick to enhance the performance technology and data management side of the sport, but I also know that he will be a great teacher and resource for our athletes. We’re very fortunate to have Nick joining us and I can’t wait to have him here and implementing his ideas for the team.” 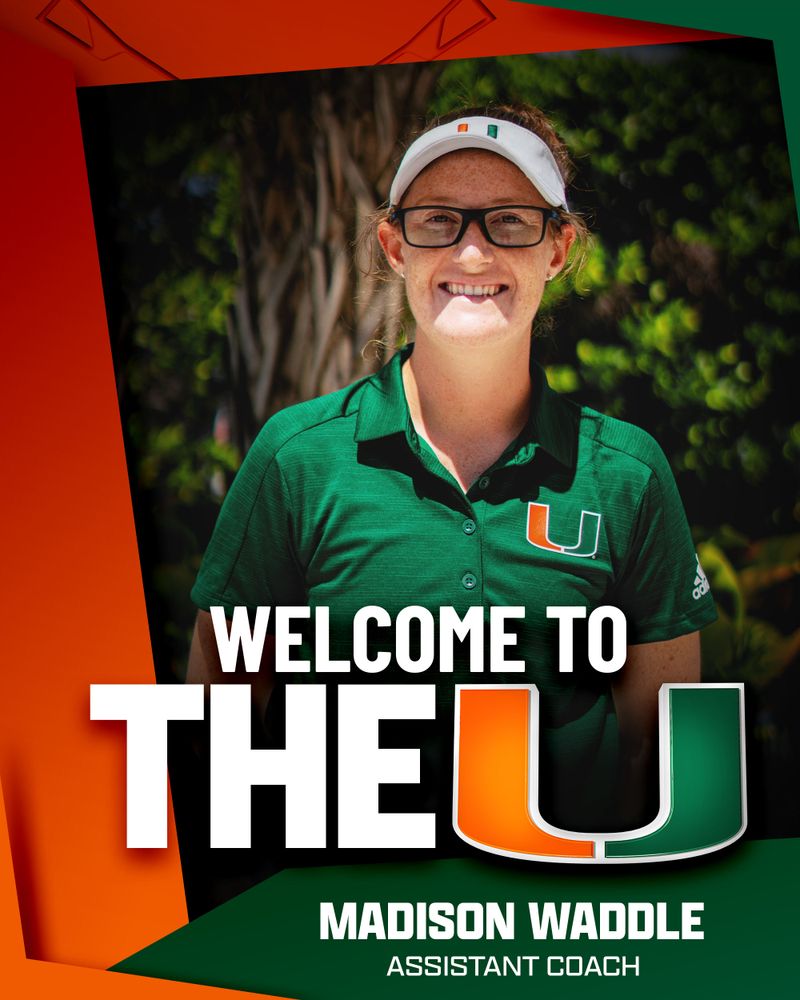 Waddle joins the Hurricanes after spending the last five years coaching junior athletes. She has worked with all levels of experience, from teaching beginner rowing skills to coaching several boats to the podium at the USRowing Youth National Championship.

Waddle graduated from Indiana University with a degree in Kinesiology and a minor in coaching. During her time at IU, she was a coxswain and began her junior coaching career.

“Madison has done an awesome job these last few years in the junior rowing world developing athletes from novices into high-performing rowers and coxswains at some of the top clubs in America,” Mulcahy said. “Our novice program here is an integral part of our team and has proven to be a pivotal experience and opportunity for so many student-athletes at The U, which means they need an excellent coach like Madison to lead them on those first steps. Her and Laura are already doing great work with our novices, and in a few years’ time I am sure we will look back and reflect on how fortunate.” 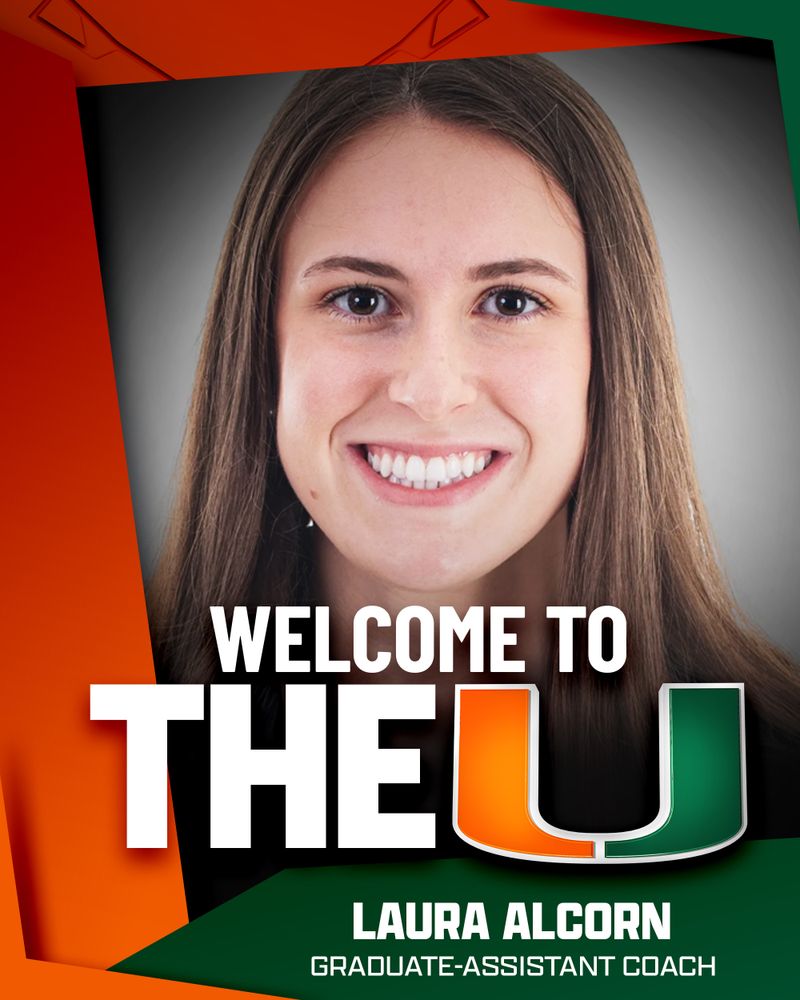 Alcorn will serve as a graduate assistant coach for the upcoming season. Originally from Valley Forge, Pa., where she originally started rowing her freshman year of high school at Conestoga High School in Berwyn, Pa., Alcorn is no stranger to the Miami Hurricanes.

Alcorn was a member of the Miami rowing team from 2017 to 2022 and served as a captain during the 2021-2022 season. From 2018 to 2022, Alcorn was the Miami Student-Athlete Advisory Committee representative. In 2020, Alcorn was in the Atlantic Coast Conference top six for service.

During the 2021-2022 season, Alcorn was a Collegiate Rowing Coaches Association National Scholar Athlete and earned a spot on the All-ACC Academic team. She also helped Miami to its first CRCA ranking in program history.

Alcorn graduated from Miami in 2021 with a B.A. in Psychology. Currently, she is in her second year of a two-year master’s program in Mental Health Counseling.

“Laura was not just a standout rower here at Miami, but she also embodies what it means to be a student-athlete in all facets of the UM experience. She is a terrific leader and her enthusiasm for Miami Rowing is incredible,” Mulcahy said. “We are incredibly lucky to keep her as part of this team for another year as our grad assistant – she’s doing great work already with Madison and our novices, and I am very fortunate to have the benefit of her insight, experience, and ideas for how to help the team continue to improve on and off the water.” 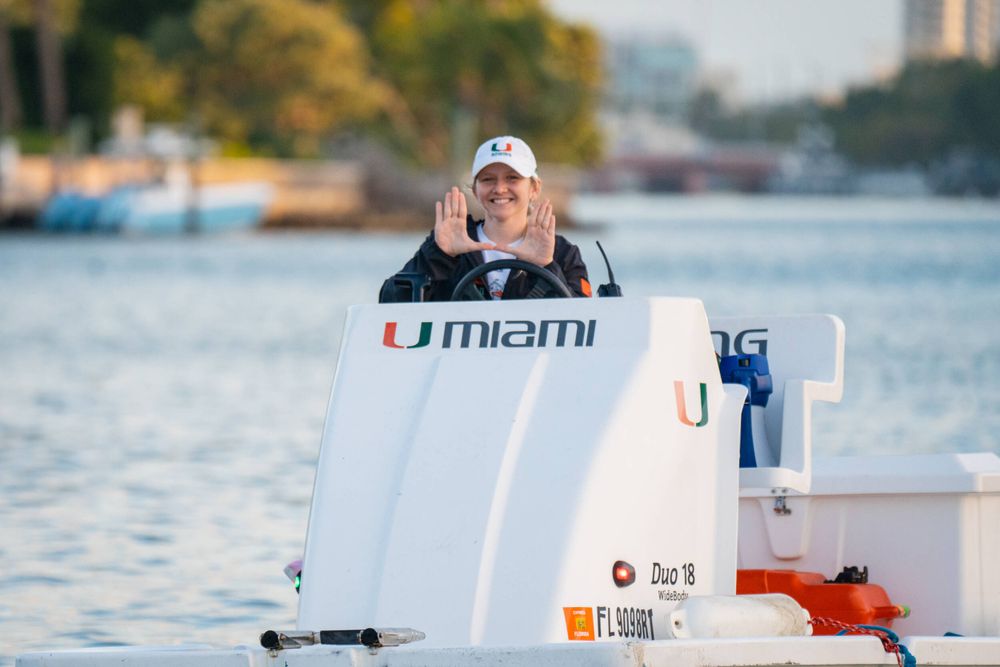 Additionally, assistant Coach Claire Frenkel will remain on staff as an assistant coach. Frenkel enters her seventh season at Miami in 2022-23 and serves as the team’s recruiting coordinator.

“I’m so happy that Claire has decided to stay with us and continue to provide the excellent leadership she’s shown to our student-athletes for over six years now,” Mulcahy said. “Claire has done a great deal over the past several years shaping the team into its current group of strong women. I am very grateful to have her here continuing to lead our recruiting efforts and to help this team reach new heights, and I know the athletes feel the same way.” 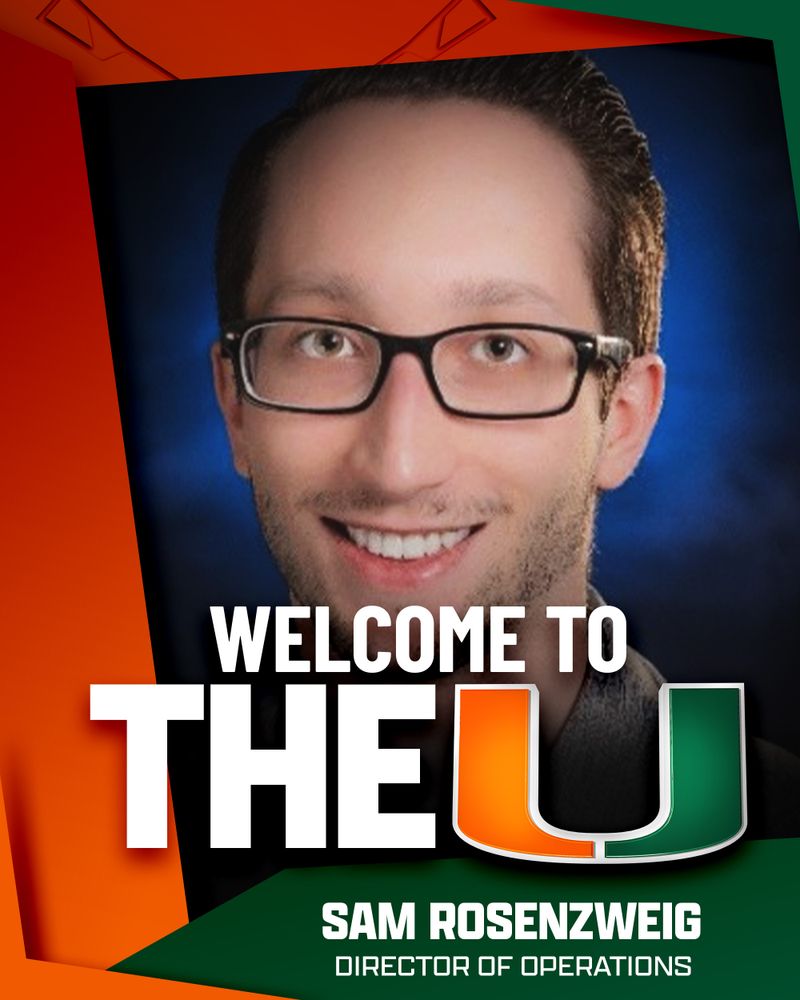 Mulcahy rounded out his staff with the addition of Rosenzweig as the team’s director of operations. Rosenzweig transitions into the operations role from a previous position in the equipment department at Miami.

“Sam has done great work with our equipment office these past several years and we’re very excited for him to join us as our director of operations,” Mulcahy said. “With Sam taking the lead on our day-to-day logistics and equipment care, this not only frees up our coaches to spend more time working with the athletes, but it will also ensure that our team benefits from a higher standard of equipment and efficiency when it comes to our daily training.”