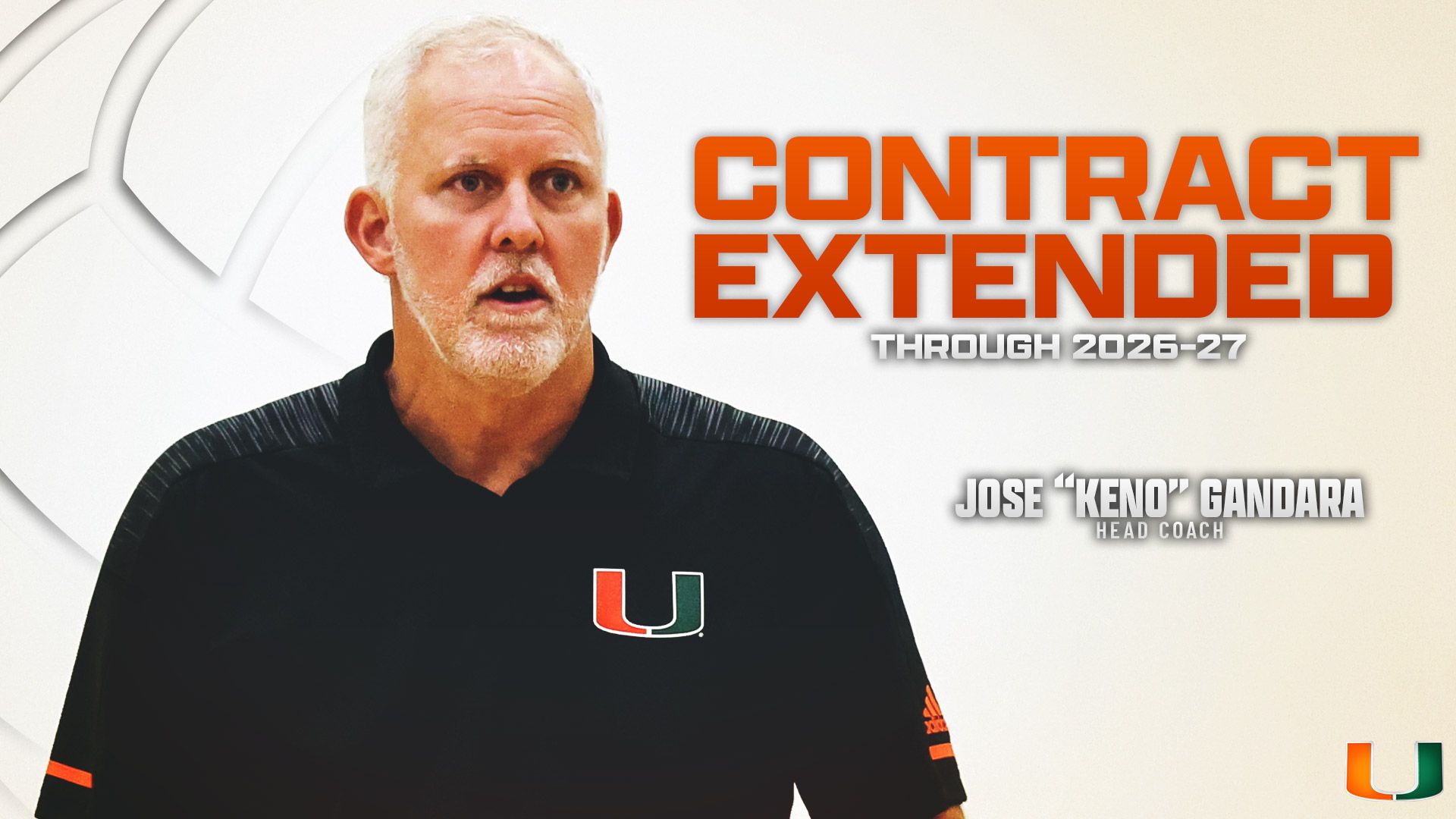 Gandara, who is entering his 10th season as UM’s head coach, led the Hurricanes to the NCAA Tournament for the fifth time in his career last season and their 25 wins were the program’s most since 2012.

“Keno and his staff have done a tremendous job building our volleyball program and we are excited to see him continue to help our student-athletes achieve success on and off the court,” Radakovich said.

Gandara has a career record of 158-94 in Coral Gables. This past season Miami went 25-5 and 15-3 in Atlantic Coast Conference play, tying Pittsburgh for second place. The Canes then advanced to the second round of the NCAA Tournament. Five Canes earned All-ACC honors, led by junior Savannah Vach, who was a first-team selection. Miami posted its most sweeps (15) since the 2011 season, including its first sweep of Florida State since 2008.

“My family and I are beyond excited to continue our work here at the University of Miami,” Gandara said. “My staff and I are very proud of our accomplishments as a team. We look forward to continuing to develop our student-athletes as we compete for both the ACC and NCAA championship.

“I would like to thank Dan Radakovich, Jennifer Strawley and David Wyman for their trust and support. Their leadership, vision and plans for the near future make it a really exciting time to be a Miami Hurricane. I would also like to thank President Frenk, Rudy Fernandez and Joe Echevarria for their continued support of our athletic department. The University’s commitment to athletics allows Dan and his staff to continue to upgrade and provide our student-athletes with the support and resources required to compete for championships while receiving a world-class education.

“Lastly, I would like to thank all our student-athletes and families for their trust and support. They are the magic. They make us proud as representatives of our program and this great institution.”

Gandara came to Miami after spending eight years as an assistant at the University of Washington, where he helped the Huskies win a national championship in 2005. He previously served as an assistant at UNLV and his alma mater, UC Santa Barbara.

A native of San Juan, Puerto Rico, Gandara graduated from UC Santa Barbara in 1990 after a successful volleyball career with the Gauchos as a middle blocker. He was a first team All-America selection in 1989 and second team selection in 1988 after leading UCSB to the national title match. Gandara has also been inducted into the UCSB Hall of Fame. He also represented both the United States and Puerto Rico in international competition as a member of their respective national volleyball teams.

Gandara is married to Stephanie Cox who was a standout setter at UCSB and played on the AVP Tour. They have one son, Lucas.