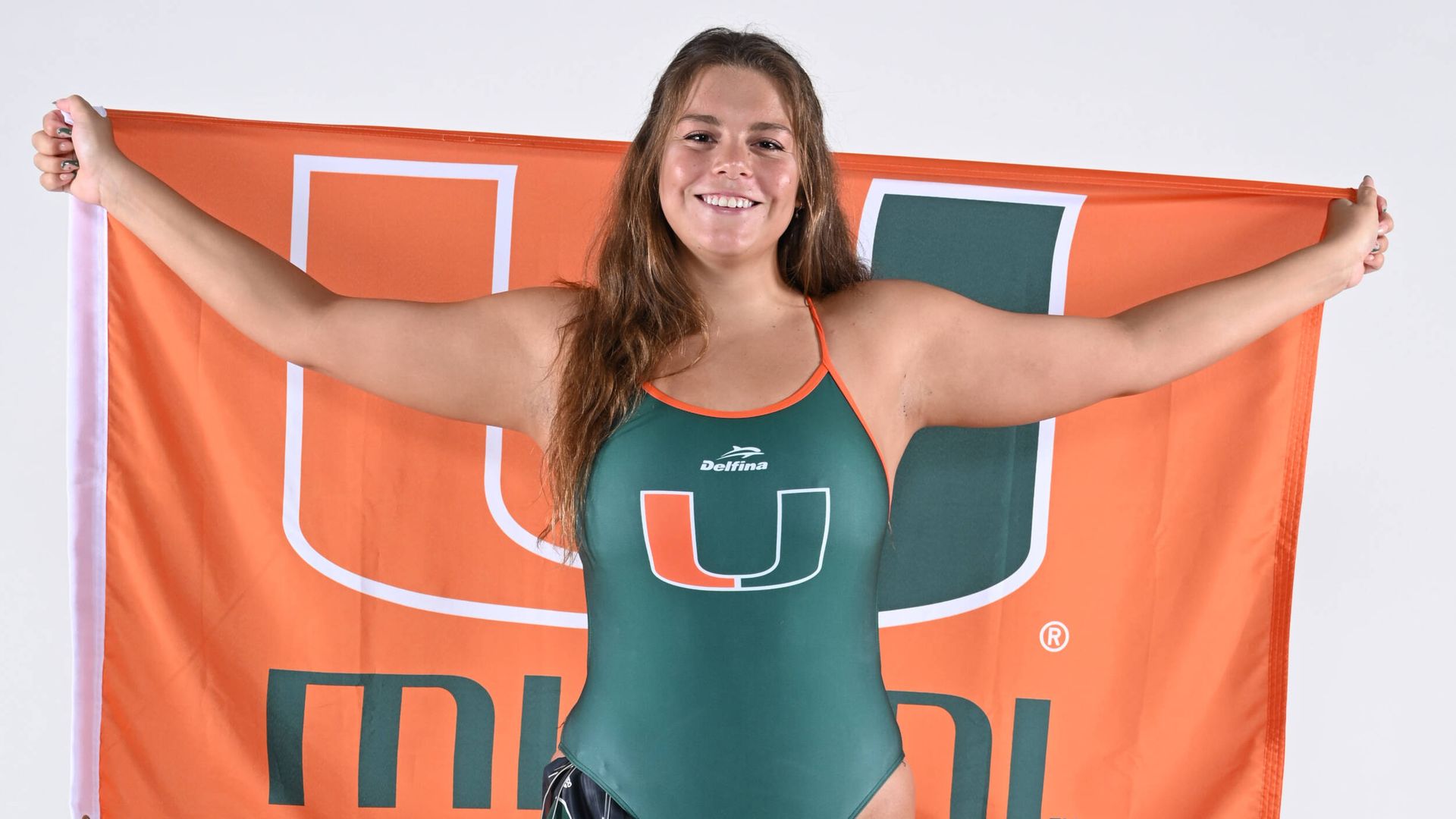 Finding a Home, Relocating A Passion

Almost a year later, even Danika Huizinga herself finds it hard to believe how much has changed.

And when she takes the pool deck on Friday afternoon for the Miami Hurricanes’ ‘Senior Day’ showdown against Florida State, another chapter in her swimming journey will conclude.

As unlikely as it may have seemed a year ago: there’s plenty more to come in this storybook career.

“When I say I love the sport of swimming again, every day I go into practice and I’m thankful for the opportunity Andy [Kershaw] and the team has given me, I truly mean it,” Huizinga said. “I am so thankful to be a part of this team.”

Huizinga will be joined in pre-meet ceremonies with four other Hurricanes – Millie Haffety, Maddie Lauther, Zorry Mason and Grace McGinnis. Her presence Friday is a far cry from where she was 12 months ago, when she had considered quitting the sport altogether. 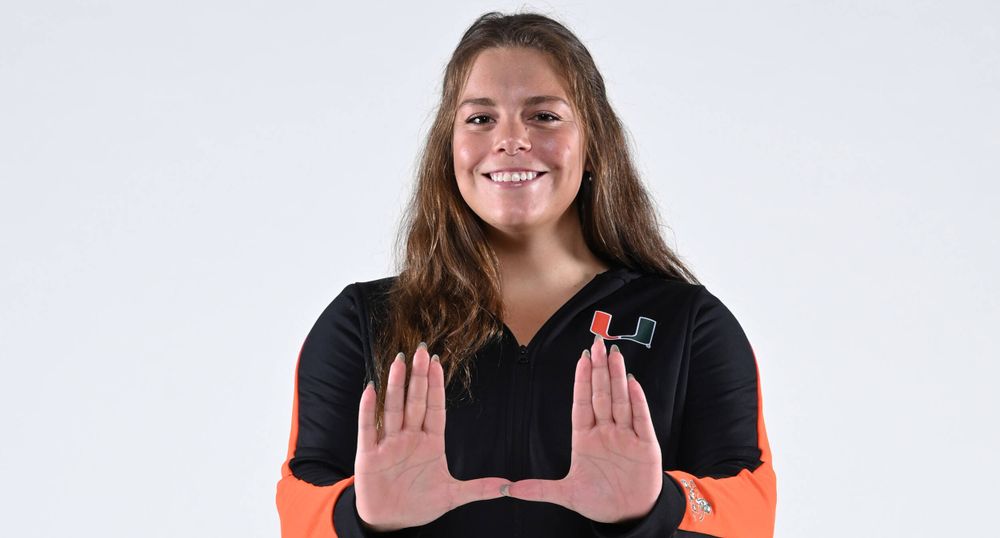 Despite a standout career at NC State that included multiple trips to the NCAA Swimming & Diving Championships and top performances at the conference level, Huizinga had lost her passion for the sport.

“I loved my time at NC State and I’m thankful for every opportunity I got there, but it got to the point where swimming was my entire identity,” Huizinga said. “I was really struggling with that aspect. I really wanted to take back my identity, and if swimming was going to be a part of it, I knew I probably needed to find a new place.”

Huizinga had always admired the Hurricanes program from afar. The team’s energy on the pool deck, evident at each of her trips to the ACC Swimming & Diving Championships, was what initially piqued her interest.

Another appealing factor? Miami’s international flair. With a history of representing Guatemala on the international stage, and having spent some of middle school and all of high school in Toronto, Huizinga said The U made sense on multiple levels.

Entering her final spring with the Wolfpack, Huizinga made it a point to observe Miami at the 2021 conference meet.

“The thing about swimming is there's usually mixed teams of both men and women. The Miami women are louder than 90 percent of mixed programs."

“The way you can tell everyone has each other’s backs and are passionate about each other, it’s a team dynamic that I knew was something I could buy into for one more year of swimming. It was something I wanted to experience,” she said.

Kershaw’s focus on team culture was about to pay off in a way he hadn’t anticipated.

“When you’re in the trenches – and this is not only true of us and the staff, but also the team – you’re doing what we’re working on doing, and you don’t really have an idea of how it appears from an outsider’s point of view,” Kershaw said. “To hear that, to get that reinforcement, is very, very gratifying.”

When Huizinga made her transfer to Miami official, she was ecstatic.

“Andy had told me about this year’s team and filled me in on different individuals, and I was just so excited because it was almost the exact feeling, but to an even larger extent, that I had gotten freshman year [at NC State],” Huizinga said. “I knew I was going to be a part of something special and was going to help create the building blocks of this program moving forward.”

Huizinga was nervous, having spent several months training alone between the end of her time with the Wolfpack and the start of her journey at Miami. But Kershaw knew Huizinga’s addition would be particularly beneficial to a talented mix of returners and newcomers.

“When she’s in a relaxed, confident state, she’s fun, a great racer and really hard to beat,” Kershaw said. “That’s where I would say this team is. They want to be so good at everything, that one of our biggest roles is to hold them back from dumping so much into one thing and remind them to have that balance and play the long game.”

She was also a member of Miami’s 400-yard medley relay team that set a program record earlier in the year – a group comprised of four women from four different countries.

“The fact that international flavor is ingrained in the culture is something that makes Miami so unique,” she said. “You get to learn all these different perspectives of all these individuals. Coming together, I think that’s what makes Miami so special. There’s not many college teams that can say that. Just to think that we can be represented at World Championships, the Olympic Games, it’s something so amazing to be a part of.”

To say her arrival at Miami has changed the course of her life’s trajectory is an understatement.

Having rekindled her love for swimming, Huizinga plans to move to Guatemala City after graduation for roughly six months, where she’ll train with the national team and begin preparations for a chance at the 2024 Paris Olympics.

“I wouldn’t have been able to come to that decision or even make the decision if it wasn’t for Andy and the rest of the team,” she said. “I feel like I’m in a place where I can love swimming and also do other things. I trust Andy’s coaching so, so much.”

She’s also planning on some potential internships in the legal field, with hopes of earning law school admission in fall 2023.

Huizinga never would have considered Paris a possibility if not for her one-year stopover journey between Raleigh and Guatemala City: sunny South Florida.

Friday’s 3 p.m. meet against Florida State – and specifically the charge Kershaw has issued to his Hurricanes in advance of the last true home meet of Huizinga’s career – marks a full-circle journey for the standout swimmer.

“The thing we’ve done the best all year is our energy at meets,” Kershaw said. “I challenged them to see if they can be the best they’ve been all year. We might be underdogs, but I want it to be electric, have a lot of fun and see how things shake out.”

Energy? It’s what brought Huizinga here in the first place.

“Miami has given me such a passion for swimming again, that I want to continue doing it,” she said. “It’s so special for me to be a part of this program. I’m thankful for it every day.”