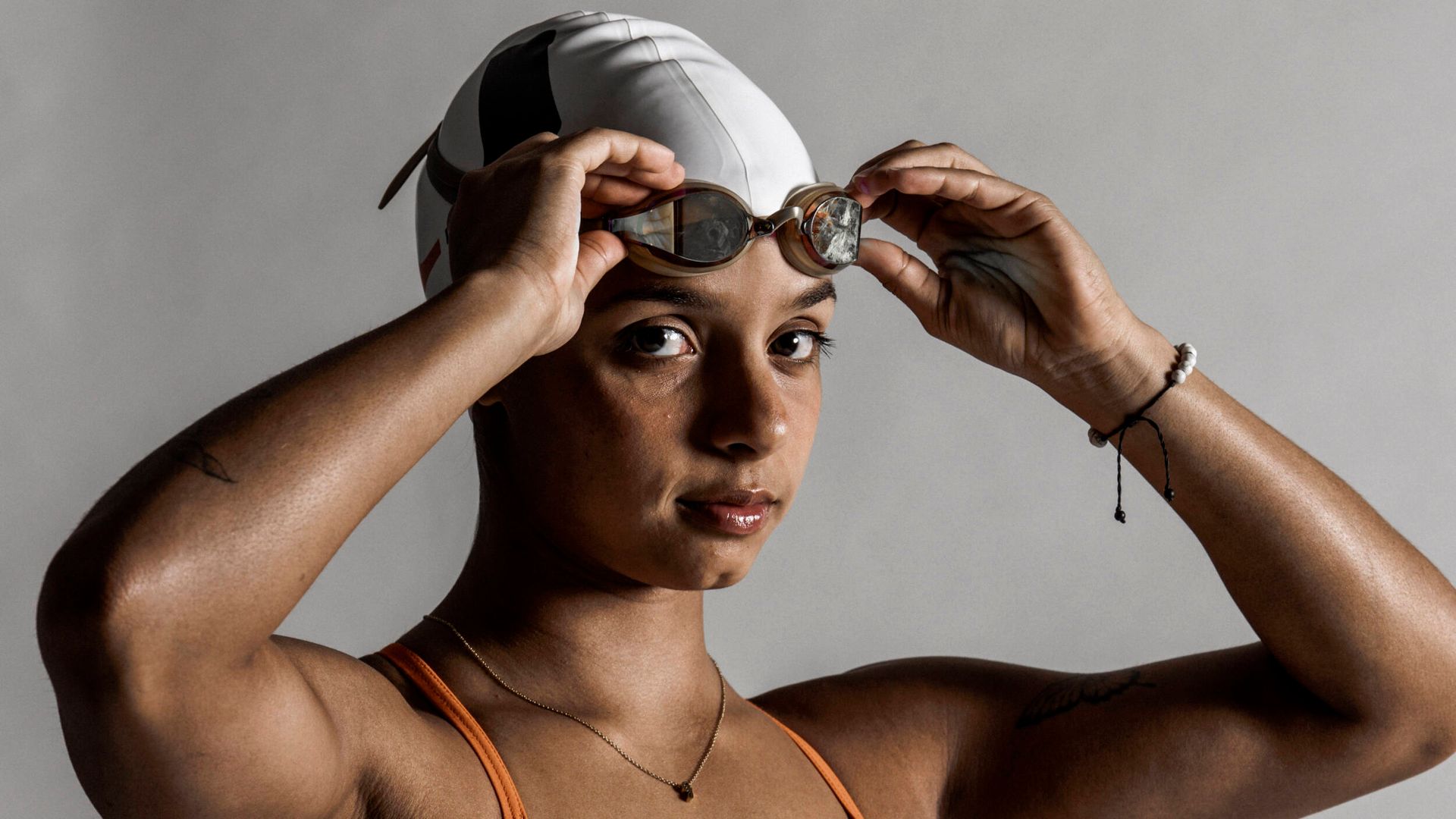 CORAL GABLES, Fla. – She should have been overwhelmed with excitement, but all Giulia Carvalho could feel was fear.

It was August 2021, and after two months of waiting, Carvalho was informed she had qualified for the 2021 Junior Pan American Games in Cali, Colombia where she’d have the chance to represent her native Brazil later in the fall.

Carvalho was set to enroll at the University of Miami in just a few days to begin her career as a collegiate swimmer when the news arrived, compounding her nerves.

“I was a little scared because my last international competition for Brazil came in 2017, and I didn’t swim very well,” Carvalho said. “I was scared.”

Three months later, Carvalho – small in stature but ample in personality – couldn’t help but laugh when recalling her initial reaction. Her mindset had completely changed by the time she began final preparations for the trip.

In a better headspace than ever before, Carvalho traveled to Cali this past November, winning a silver medal in the 100 long-course breaststroke and two gold medals as a member of Brazil’s 4×100 IM medley teams.

“I was practicing a lot, my training was going so good, and I was just having fun,” Carvalho said. “Entering this competition, I said, ‘No pressure. Let’s go. Let’s do it. I’m happy. I want to do this.’

“When I traveled and saw my friends from Brazil, I was so happy. It was special for me.”

Carvalho credits her early time spent at the University of Miami, notably the support from her Hurricanes swimming teammates and coaches, for preparing her for the moment.

“I think that helped me a lot, so I don’t feel alone,” Carvalho said. “There are a lot of people who are in the same situation as me, the team especially, that helped me a lot. I was talking to them about how I felt and they said, ‘No, it’s normal. With time, everything will be different.’

“I was a little sad and homesick, and they taught me a lot to help me.”

Head swimming coach Andy Kershaw wasn’t sure what to think when he first met Carvalho and her family on campus for the first time.

“I didn’t know she was that little,” remembered Kershaw, who had seen film of Carvalho but hadn’t yet seen her compete in person. “I thought, ‘How is this girl ever going to compete in the ACC?’ But she brings such a bigger presence than she presents physically.

“Her enthusiasm, her joy…it’s so empowering and makes such a great impact. That’s what I felt in the recruiting process. She’s wants to be great, and she’s willing to do what she needs to do to be great. You can’t ask for much more as a coach.”

Though Carvalho struggled with some aspects of the transition, she said her teammates helped her through the initial hurdles of life in the United States.

"The beginning was a little hard. My English is not the best. To communicate was a little hard, to express what I wanted to say. They helped me a lot, trying to understand what I want to say. It was really nice, just to be in another country and speak another language.”

Carvalho, who hails from Belo Horizonte, Brazil, had been to Florida a handful of times before arriving in Coral Gables, but mostly to visit the theme parks in Orlando with her mother, Alexania, her father, Sandro, and her older brother, Alexander.

“I know here, it’s a big country who invests in sports,” Carvalho said. “In Brazil, it’s so different. They invest in mostly soccer. It’s not the same thing. The studies here are so much better than Brazil. It was a dream when I was young to be here, so when I graduated from school, I was looking for universities with my parents. I talked to Andy and when I talked to him, I was sure I wanted to be here.

“Here, it’s amazing. I think it’s the best university, it’s so beautiful, everyone here is so nice. My parents felt the same vibe as me.”

One place where Carvalho has never felt uneasy: the pool.

She has made an immediate impact in her freshman fall and has already recorded multiple times that rank in the top 10 in program history.

“She’s so talented and has such great feel for the water,” Kershaw said. “She’s just scratching the surface. She has such a high ceiling. She can accomplish so much here, in Brazil and all around the world.”

When Miami’s entry in the 400 medley relay broke a school record earlier this fall at the SMU Classic, Carvalho was part of history. The Brazilian joined Emma Sundstrand of Sweden, Danika Huizinga of Guatemala and Carmen San Nicolas of Spain in the record-setting performance, accomplished by three other individuals from across the globe.

That’s not how Carvalho sees it, though.

It’s not about the blue, green and yellow of Brazil’s flag, the red and yellow of San Nicolas’ native Spain, or any other that Carvalho sees in her new teammates – it’s just the orange and green that helped her find a new home and family.

“It doesn’t matter where you live, or where you’re from,” she said. “We are a team. I am so happy to be part of the team and be a part of the relay. We broke the record. It’s amazing…I’m so grateful for that. My teammates helped me a lot. Without them, nothing could happen.”