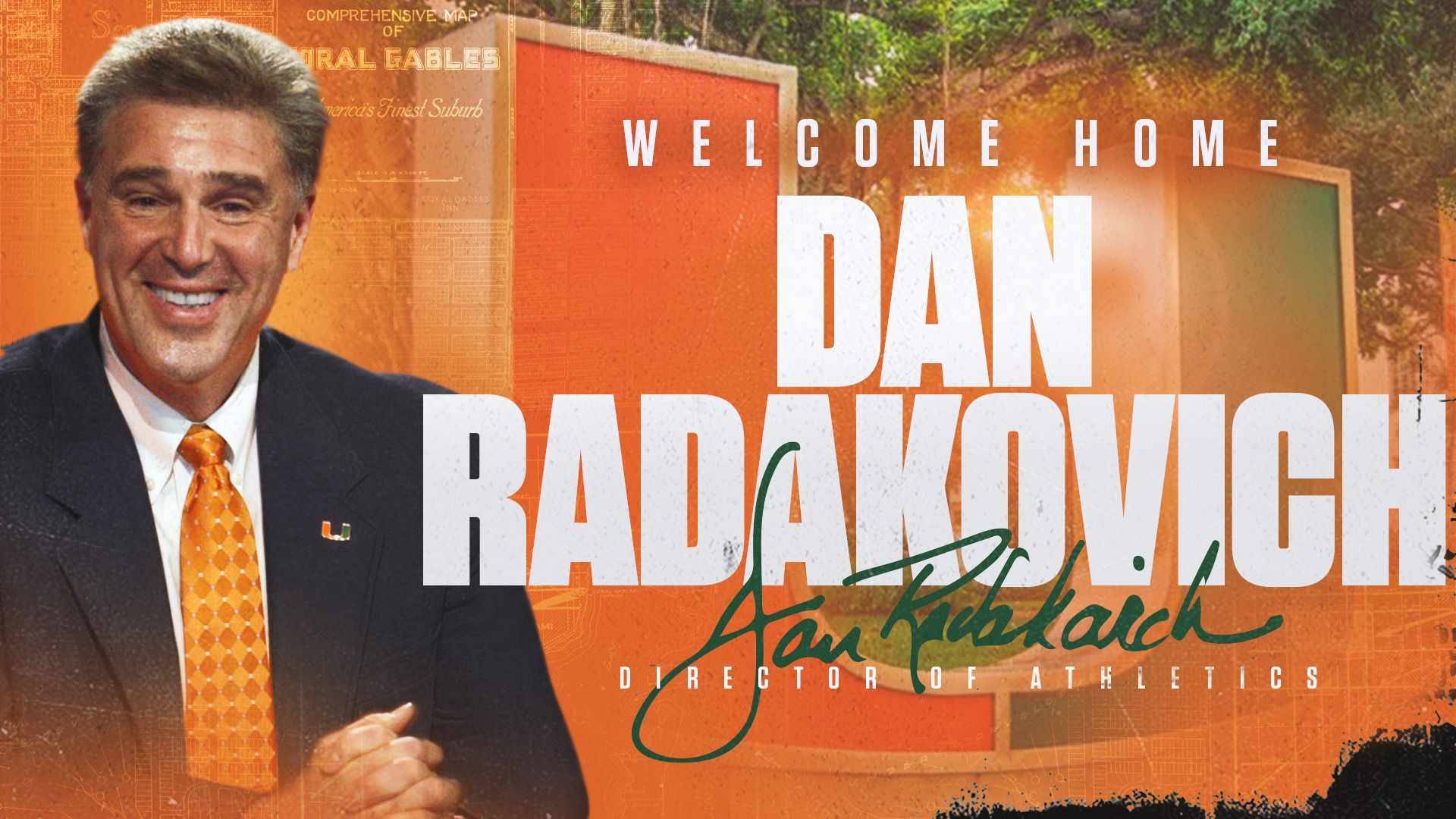 One of the nation’s most well-respected athletics administrators is returning to the institution where nearly three decades ago he launched his career—the University of Miami. Dan Radakovich, who served as director of athletics at Clemson University for the past nine years, has been named vice president and director of athletics at Miami, President Julio Frenk announced today (Dec. 9). Radakovich will report directly to Frenk and serve as a member of his senior leadership team.

“I am so grateful to President Frenk and the University’s Board of Trustees for this incredible opportunity,” said Radakovich. “Their commitment to Miami Athletics’ comprehensive pursuit of excellence and championships is what brought me back to Miami. As a unified Hurricane family—students, alumni, donors, and fans—there is nothing that we cannot accomplish. We are going to set the bar high and jump over it.”

Radakovich’s distinguished career in athletics leadership spans more than 30 years. His tenure at Clemson was marked by student-athlete academic achievement; comprehensive competitive success, including two national championships in football; significant facility construction and enhancements; and notable increases in revenue and fundraising. He was named Athletic Director of the Year by Sports Business Daily in 2017 and served as a member of the College Football Playoff selection committee from 2014 to 2017.

“This is a significant moment for the future of athletics at the University of Miami,” said Frenk. “Dan is one of the most highly regarded athletics directors in the country. He knows Miami well, from his time at the U and at Clemson, an ACC peer. His proven success, and the success that Dan has helped enable for student-athletes in the classroom and in competition, is reflective of our values. He has the experience, the relationships, and the passion it takes to ignite and sustain excellence—the very core of our bold vision for the future of Hurricanes Athletics.”

“There is a unique opportunity at Miami, with the tremendous changes happening across our city and South Florida, to build something truly special,” said David Epstein, chair of the athletics committee of the Board of Trustees. “We sought out a proven leader who is aspirational, entrepreneurial, and visionary, and who will build a world-class athletics program at the U. Dan is that leader. His hire, and the extraordinary hire of Mario Cristobal as our next football head coach, puts Miami on a trajectory unmatched by any athletics program in the country.”

Radakovich helped complete more than $200 million in facility construction and enhancements at Clemson, including the renovation of Littlejohn Coliseum and the construction of facilities for football, tennis, baseball, and softball. Department revenue nearly doubled under his leadership, and philanthropic contributions are at an all-time high.

“I am truly excited to welcome Dan to Miami,” said Deputy Director of Athletics Jennifer Strawley. “I have had the opportunity to work closely with Dan at the conference level and to see first-hand his visionary leadership, championship mentality, and commitment to the holistic development of student-athletes. This is a tremendous moment for our student-athletes, coaches, and staff, and I look forward to working with Dan as we build the next great era in Miami Athletics.”

Of Strawley, who has led the department as interim director of athletics since mid-November, Frenk said, “I want to personally thank Jenn Strawley for her unflinching leadership of our athletics department during this period of transition. Jenn is a valued member of our Hurricanes family, and I am grateful that she will continue to serve as a member of our athletics leadership team, working closely with Dan, as we build for the future. She shares our commitment to relentlessly pursuing championships, while developing our student-athletes into focused competitors and leaders.”

Radakovich is a native of Aliquippa, Pennsylvania. He earned a bachelor’s degree in finance from Indiana University of Pennsylvania in 1980, where he was a football letterman and student coach, and an MBA from the University of Miami in 1982. He is enshrined in the IUP and Beaver County sports halls of fame and was honored by IUP with a distinguished alumni award in 2009.