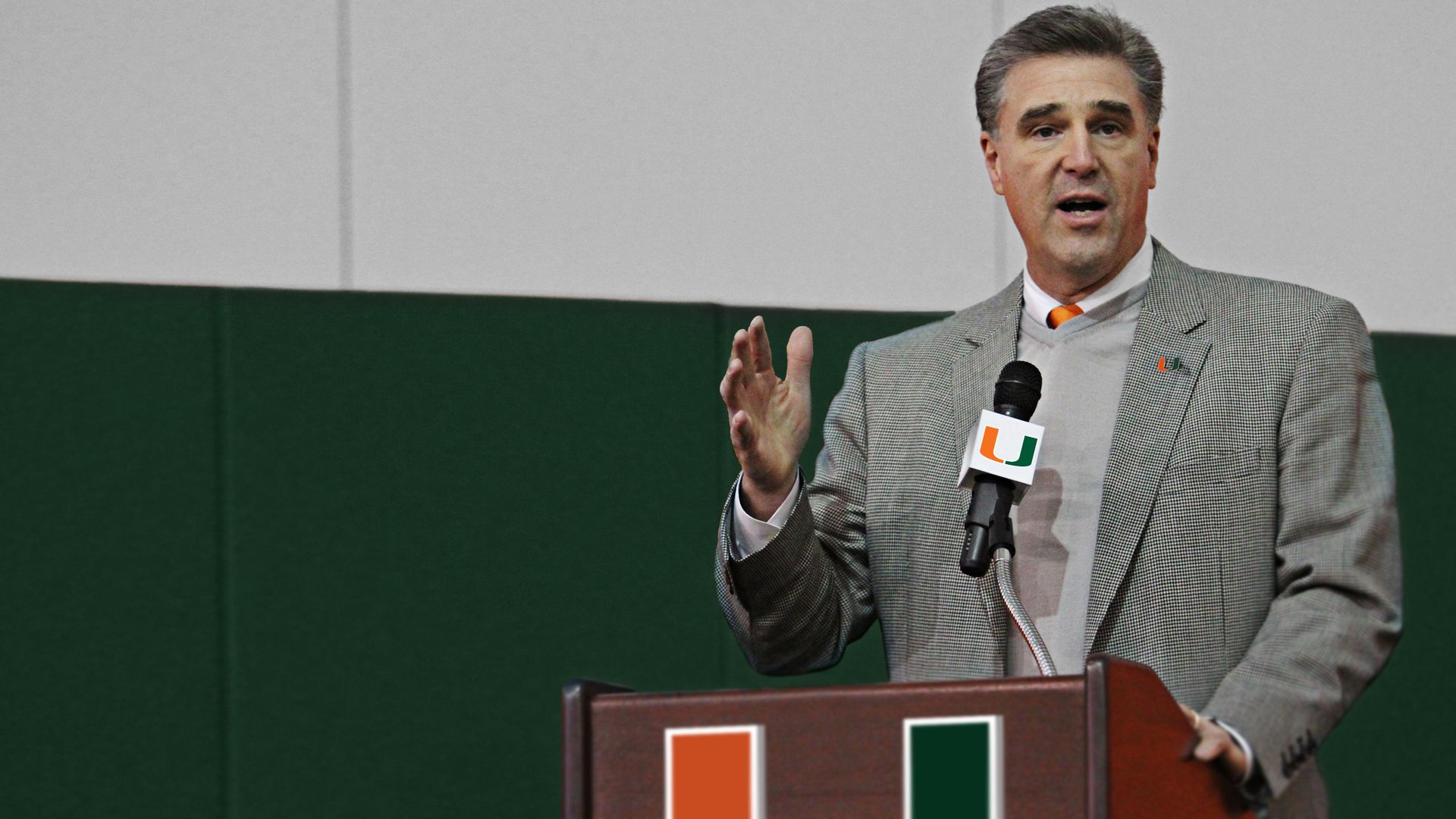 "We Need to be the Best That We Can be"

Even from a distance, Dan Radakovich couldn’t help but keep an eye on Miami.

It was, he conceded, a bit hard to root for the Hurricanes if they happened to be playing against the school where he was working  – something that happened most recently last Saturday when Miami’s men’s basketball team rallied late for a comeback win over Clemson.

But the degree on Radakovich’s wall and the fact he started his career at Miami meant he always had more than a passing interest in how the Hurricanes were doing.

“It’s always good to be able to see a place that you went to school and worked a little while – even though it was generations ago – do well,” said Radakovich, who earned his MBA from Miami in 1982 and not long after, joined the Hurricanes as their athletic business manager. “Always a lot of pride when they were doing well.”

Radakovich will now see to it that the Hurricanes are doing as well as possible in every way, every day.

The veteran administrator who most recently led the athletic department at Clemson was named Miami’s new Director of Athletics on Thursday and will serve as a vice president on the senior leadership team of University President Julio Frenk.

“This is a significant moment for the future of athletics at the University of Miami,” Frenk said. “Dan is one of the most highly regarded athletics directors in the country. He knows Miami well, from his time at The U and at Clemson, an ACC peer. His proven success, and the success that Dan has helped enable for student-athletes in the classroom and in competition, is reflective of our values. He has the experience, the relationships and the passion it takes to ignite and sustain excellence – the very core of our bold vision for the future of Hurricanes Athletics.”

During his nine years at Clemson, Radakovich presided over a program that won 15 Atlantic Coast Conference team championships, including six ACC football titles. The Tigers made the College Football Playoff six times and won a pair of national titles during that span.

In the classroom, Clemson’s student-athletes recorded nine semesters with a 3.0 GPA or higher and the athletic department attained the school’s highest-ever NCAA Graduation Success Rate in 2021 at 95 percent.

Before leading the program at Clemson, Radakovich served as the Director of Athletics at Georgia Tech from 2006 to 2012 and was a senior associate athletic director at LSU when the Tigers won a football national championship in 2003.

He has also worked at American University, South Carolina and Long Beach State University. In 2017, Radakovich was honored as the Athletic Director of the Year by Sports Business Journal and from 2014 to 2017, he served as a member of the College Football Playoff selection committee.

Now, Radakovich is hoping the experience he gained at each of those stops will help him take Miami’s athletic department to the next level, in the classroom and in all 18 sports in which the Hurricanes compete.

“I think we need to be the best that we can be. I know that’s cliché-ish, but without understanding all the challenges that are in front, we need to be able to bring the success of the athletic program that’s been there in different sports at different times, try to coalesce it so that it occurs frequently,” Radakovich said. “We need to be good in football, for example, for the Atlantic Coast Conference to be the best it can be. So a lot of resources will need to be put forward there.

“Some of our other programs, baseball comes to mind, have been incredibly successful over the years. Baseball has always been one of those brand-extenders for the institution. There are a lot of good programs. The basketball programs have had their moments, both men’s and women’s, the tennis programs. It’s just the kind of thing that we need to be able to continue to look and see what the coaches need and what our student-athletes need to be successful. That’s the vision. The vision will come into play once you understand what the resources are that you’re working with or what the circumstances are that you’re working with and then how resources may be able to help move those forward.”

Getting a gauge on all of those things, and more, will be among Radakovich’s immediate priorities in the coming weeks and months.

There will be countless conversations with Miami’s coaches, student-athletes and staff where the athletic director hopes to not only learn about what each program needs to succeed, but where he hopes to get to know as many Hurricanes as he can.

“Athletics is a people business. People are the most important asset and just making sure that looking at the folks that are there, making sure people are on the right spot on the bus and doing the things that are maximizing their talent and their energy to be able to move program forward,” Radakovich said. “The vision and the details will become incredibly evident once you get on the ground and you see the talents and the energies of the people there.”

As excited as he is to get started on his journey at Miami, Radakovich knows it may take time to get the Hurricanes where they want to be.

But the support he says the athletic department is getting from Frenk, the University and Miami’s Board of Trustees, along with Rudy Fernandez, the president’s chief of staff and Joe Echevarria, a senior advisor to the president, will be a difference-maker for the Hurricanes moving forward.

“I’ve been in the business a long time. Shortcuts usually never work. Being able to build it the right way from the foundation up and having the student-athlete-centric idea is just crucial,” Radakovich said. “I want everybody to know how excited I am to be able to come there and really, utilize the talents that I’ve accumulated over my time for the betterment of the University of Miami. That’s what’s special right now. It’s going to be a process. It’s going to be one that I look forward to and really want to be able to reinvigorate our staff, our coaches, our administration, and our Board. We can all get in this together and we can all do great things.”