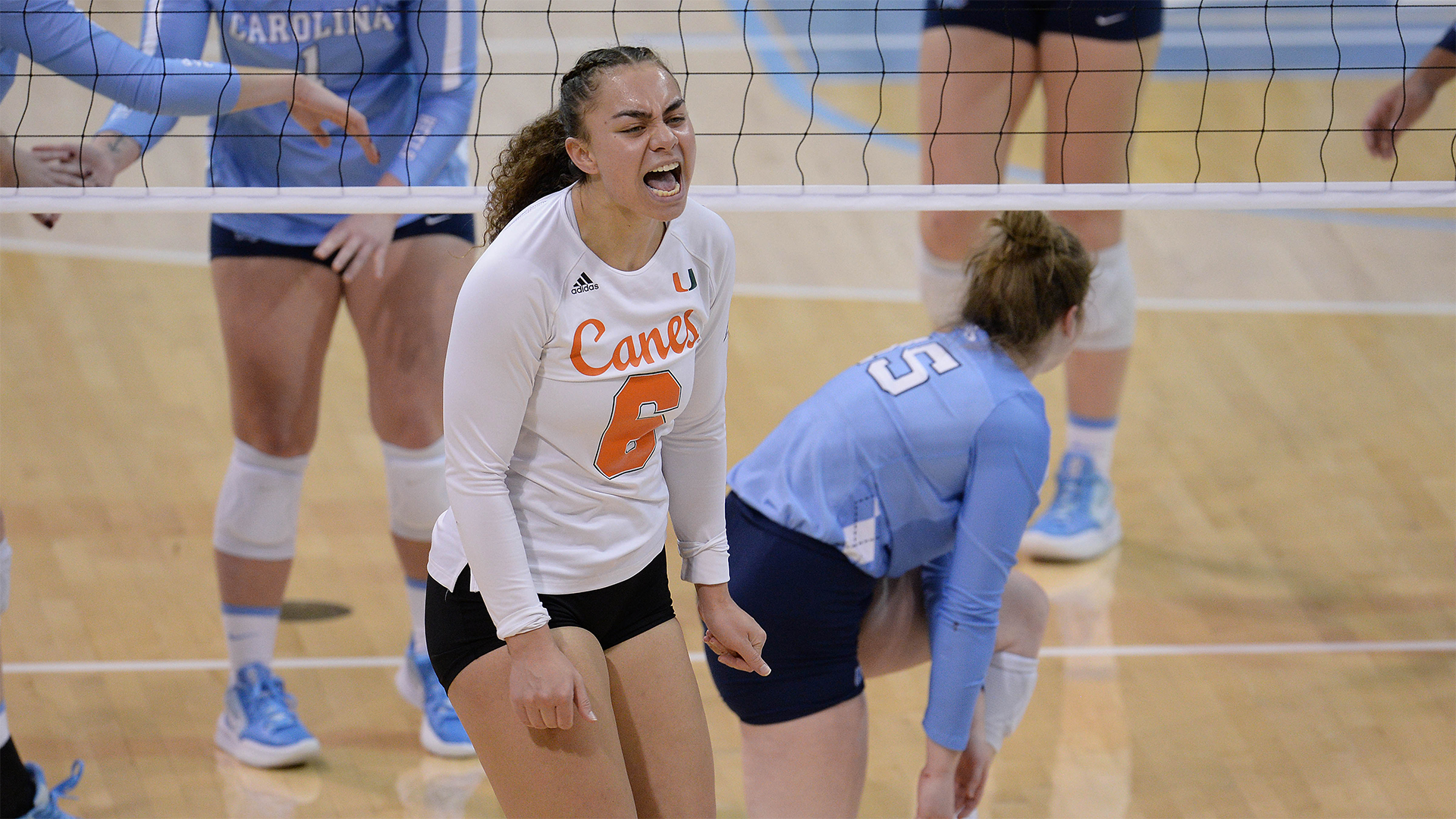 CHAPEL HILL, N.C. – The University of Miami volleyball team capped off the road portion of its regular season with a win, 3-1, over North Carolina on Sunday afternoon in Carmichael Arena.

The win marks the first in Chapel Hill since Nov. 12, 2004, when the Canes won in four sets. It is also the first season sweep of North Carolina since 2004.

With the win, the Hurricanes finish the regular season a perfect 9-0 in match’s played on Sunday.

Miami posted its 11th contest this year with double-digit blocks, recording a season-best 19 in the win.

“This was a big weekend for us – we haven’t won at either FSU or UNC since I’ve been here,” said head coach Jose “Keno” Gandara. “To do both on the same weekend is really special to me. It’s been a pleasure and an honor to coach this team. I am really fired up for Wednesday against Wake Forest.”

Savannah Vach tallied her 10th double-double of the season with 38 assists and a match-high 15 digs.

Angela Grieve finished with a game-best 20 kills, her 23rd match this year with double-digit kills, on a .372 attacking percentage. Janet Kalaniuvalu added 17 kills in the win, while Peyman Yardimci had 11 on the afternoon.

“Peyman got a pretty good beat on their left side hitters and blocked really well,” Gandara added. “She had another awesome weekend and has gotten better and better every step of the way. To block nine balls as an opposite and 19 balls as a team – our defense has really been a year-long process that has been hard and filled with doubt at times, but it’s paying off this season.”

A quick start by the Tar Heels put them up early, 11-7. Aristea Tontai ignited a 4-0 run for Miami with a kill to even the set at 11 all. After UNC took two of the next three points, Kalaniuvalu registered a kill to spark a second 4-0 run for the Canes to put them in front, 16-13, and force North Carolina to use a timeout. The Tar Heels regained the advantage at 19-17 following a 6-1 run. Miami earned the next two points to even the set but UNC caped the opening frame off on a 6-2 run to take the match lead with the 25-21 win.

In a tightly battled second set, the Hurricanes put on a hitting display with an attacking percentage of .432. Down by just two points, 9-7, Miami utilized a 7-1 run to jump in front, 14-10 and take the eventual 15-11 lead to the media break. The Canes advantage was extended to as much as five, 17-12, though a 4-1 run by the Tar Heels cut their deficit to two at 18-16 and forced a Miami timeout. Trailing late, 23-19, North Carolina stormed back with four straight points to even the set at 23 apiece. Grieve tallied the final three kills of the set for the Hurricanes who closed on a 3-1 run for the 26-24 victory.

The match saw a thrilling fourth set as Miami went to extra volleyball for the sixth time this season. Behind 8-6 in the early going, the Hurricanes rattled off seven straight points to push in front by five, 13-8. The Canes used their first timeout after a 5-1 run cut their lead to just one. Back-to-back kills from Grieve triggered a 6-2 run by Miami to extend its lead, 20-15. In a set of runs, UNC responded with their own 6-2 run to make the score 22-21 in favor of the Canes and force Miami to use its final timeout. Both teams fought to the end before back-to-back blocks from the tandems of Leao and Yardimci, and Leao and Vach sealed the 29-27 set win for the Hurricanes.

Grieve opened the fourth set with a kill as Miami held on to take a slim 15-12 lead to the media timeout. Four points later, trailing 18-13, UNC called its first timeout. Out of the break, the Canes went on a 4-1 run to take the commanding 22-14 advantage. The Tar Heels stormed back with a 7-1 run to draw within two, 23-21. Miami fended off the attack to take the set 25-22.

Next up, the Hurricanes return home to the Knight Sports Complex for Senior Day and their regular season finale against Wake Forest at 3 p.m. on Nov. 24.