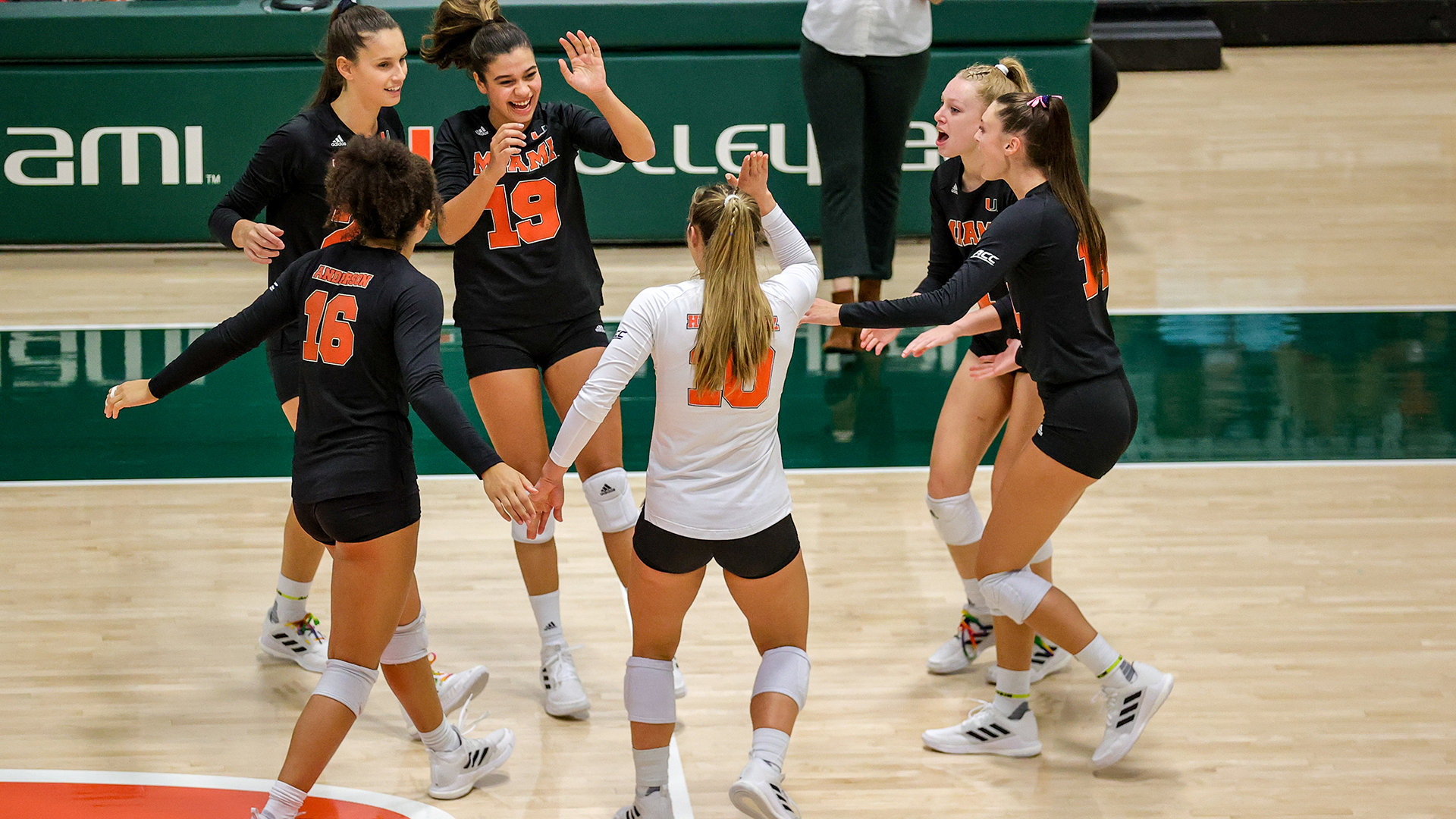 WINSTON-SALEM, N.C. – The Miami Hurricanes faced a deficit they hadn’t experienced too often this season.

Down 2-0, the Hurricanes rallied to claim the next three sets, completing a reverse sweep Friday evening against Wake Forest inside Reynolds Gym.

“I can’t say enough good things about Wake Forest,” said head coach Jose “Keno” Gandara. “They’ve got great size, they’re block is excellent, the grad transfers are foundational pieces.  Randi [Smart] and her staff should be so proud of the job they’ve done, and I’m not looking forward having to deal with them later in the year.”

A quartet of Canes – Peyman Yardimci, Angela Grieve, Nyah Anderson, and Janice Leao – registered double-digit kills in the victory. Yardimci posted a career-high 19 kills with an attacking percentage of .349. She added 14 digs for her second career double-double. Grieve tallied 16 kills, while Leao recorded 10 and Anderson notched 11.

“Feels like this was a little bit of a coming out party for Peyman,” Gandara added. “So far this season, she’s been an excellent complimentary piece, but we haven’t had to rely on her to carry us yet. Tonight, we did, and she was excellent. She can block better, but her attacking, serving and defense was all outstanding.”

Setter Savannah Vach tallied her second game this season with 50-assist match this campaign, finishing with a season-best 57 assists. The junior setter totaled nine digs, two kills, an ace and a block in the win.

Wake Forest (11-9, 2-7 ACC) opened the contest with back-to-back kills, and pushed in front with an early 8-4 lead. Vach’s service ace and a Demon Deacon error cut the Miami deficit to one, 8-7. Wake Forest utilized a 7-2 run as it never looked back to take the first frame, 25-17.

Grieve started the second set strong with a kill as the Hurricanes doubled up Wake Forest, 10-5, to make the Demon Deacons use an early timeout. The redshirt sophomore outside hitter sparked a 4-1 run as UM gained a 15-10 advantage. Wake Forest used a 3-0 run, forcing Miami to use its first timeout as its lead was to cut to one, 17-16. The set drew even at 21 aside as the teams battled down the stretch. The Demon Deacons narrowly escaped with the 25-23 win.

After trailing, 10-8, Miami utilized a 7-1 run sparked by a Yardimci kill to take a 15-11 lead to the media timeout. Wake Forest used its first timeout just five points later with the Canes ahead, 18-13. The Demon Deacons came within three on four separate occasions late, but Anderson locked in the third set, 25-21, for Miami.

Vach and Leao teamed up on the pin, putting the Hurricanes in front, 6-3. Following a 3-0 Demon Deacons run, Anderson recorded back-to-back kills to even the set, 11-11. In a back-and-forth set, Wake Forest used a 3-0 run to gain a 19-16 lead and force a Hurricane timeout. Trailing by four, 22-18, the Hurricanes stormed back with a 7-1 run to close out the fourth set and force a deciding fifth frame.

Next, the Hurricanes travel to Blacksburg, Va., for a 1 p.m. matchup on Sunday with Virginia Tech.