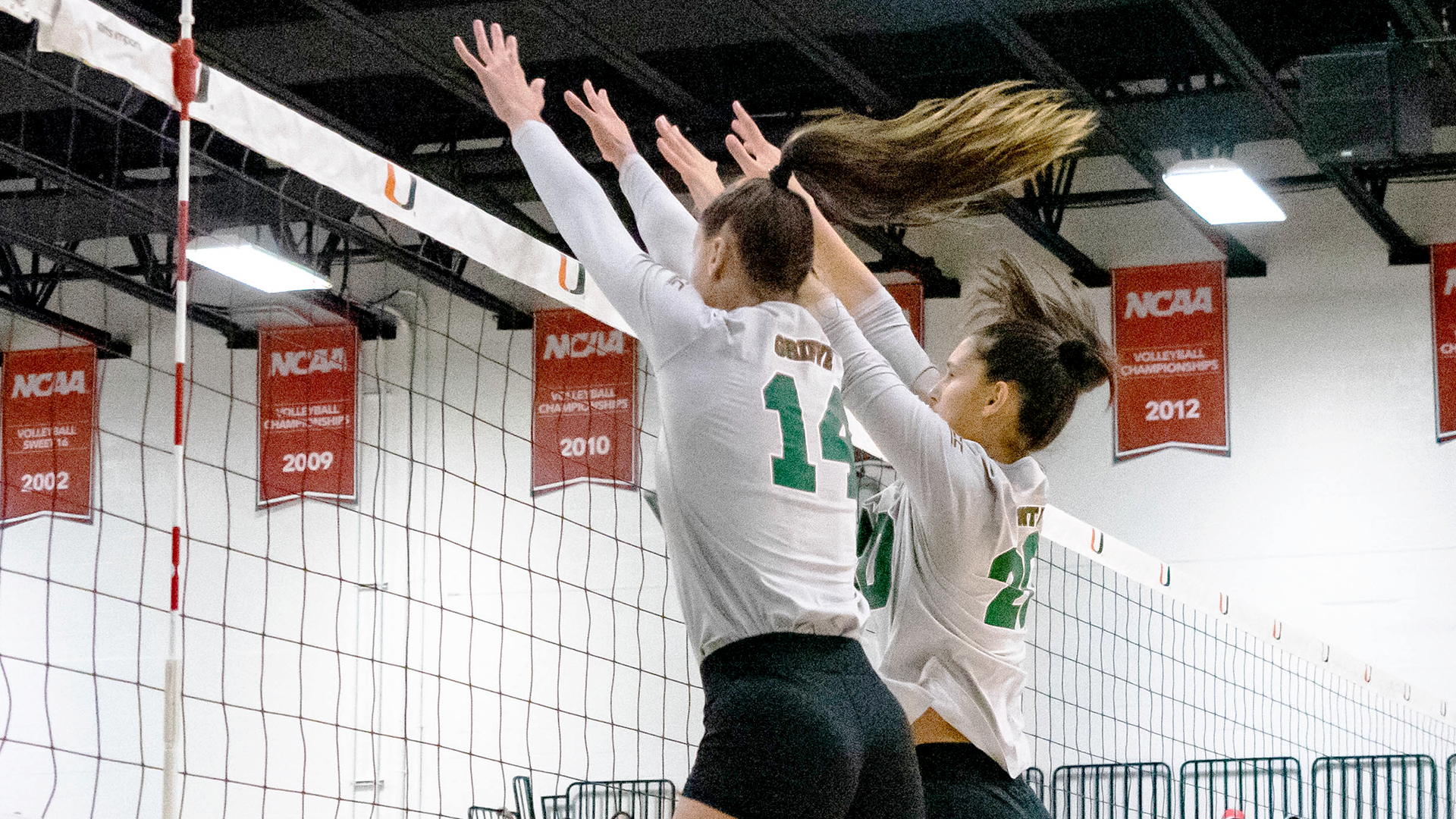 CORAL GABLES, Fla. – In its return home to the Knight Sports Complex in almost a month, the University of Miami volleyball team opened its home conference schedule with a thrilling five set victory over North Carolina Friday night.

“First and foremost, we have work to do. Our defense on the left side was pretty poor for long stretches,” said Miami head coach Jose “Keno” Gandara. “Credit to Mabrey Shaffmaster and Nia Robinson of UNC, that’s as good a pair of outside hitters that we’ve seen in a long time. We’ve got to be better blocking and digging the opponent’s outsides.

“It wasn’t our prettiest match, but it’s ok to win rough. You don’t apologize for winning and we were thrilled to win in front of an awesome home crowd. It’s been awhile since we’ve been home, so to draw that crowd and win a close one always feels special.”

UM posted season-highs with 69 digs and 14 blocks in the win.

Savannah Vach notched her fourth double-double of the season with season-highs of 49 assists and 15 digs. She added four kills and two blocks on the night.

Angela Grieve and Janice Leao each tallied season-highs in kills. Grieve posted 18 and Leao finished the match with 13.

“I thought Janice [Leao] was the best player on the floor tonight,” added Gandara. “She is really growing up in front of our eyes as a player and a leader. The next step was performing at her best when it was our only option to win, and she did it tonight. She’s still a long way from a finished product, but her progress has been stellar, and she’s bound for special things.”

Miami came out of the gate hot, taking an early 5-1 lead to open the match. The Tar Heels responded as the teams eventually knotted the opening set at 11-11. UNC took a 15-13 lead into the media timeout as Miami remained within striking distance. Three straight points from Leao, two kills and a block, evened the set at 17-17. There was no give from either team in the opening set as they traded points. Grieve tallied three straight kills to end the set, guiding UM to a 29-27 set win, and a 1-0 match lead.

The second set continued where the first set left off, tightly contested. North Carolina called its first timeout of the set early with Miami ahead 6-3 following a 4-0 run. UNC took the next three points out of the timeout, but the Canes snapped it with back-to-back kills by Leao to spark a 6-1 run as Miami jumped in front 12-7. Against her alma mater, Aristea Tontai snapped a 3-0 Tar Heel run to knot the set at 17-17. Leao and Vach put UM back on top, 20-19, as the Hurricanes never looked back to take the 25-20 set victory.

Set three opened with a quick 6-3 lead for North Carolina. A UNC ball handling error drew the set even with an 8-8 tie before the Tar Heels regained the lead on the next point. The Tar Heels extended their lead to four, 15-11, heading to the media timeout. Despite Miami pulling within five points on three separate occasions late, UNC held on for the 25-18 win and making the match 2-1 UM.

The clash continued into fourth set as the teams evenly split the first 16 points. Janet Kalaniuvalu ignited a 4-0 Miami run to push the Hurricanes in front, 12-8, and force a North Carolina timeout. UNC answered out of the timeout with a 6-1 run to take a 14-13 advantage. The Tar Heels took a three-point lead at 17-14 and fought off the Miami attack who drew within one, 19-18, to hold on for the 25-20 set win to even the match at two sets a side.

It ended how it began in the Knight Sports Complex on Friday night with, yet another evenly fought set. UNC was forced to use its first timeout early as an attacking error from the Tar Heels put the Canes on top 7-5. North Carolina evened the game on three different occasions and as late as 12-12. Though, it was Miami who closed the match on a 3-0 run, which included back-to-back assisted blocks from Tontai and Peyman Yardimci. The Canes took the deciding fifth set, 15-12.

Miami remains home as it hosts NC State for 80’s Day on Sunday at 1 p.m. in Knight Gym. The match is free entry for fans.