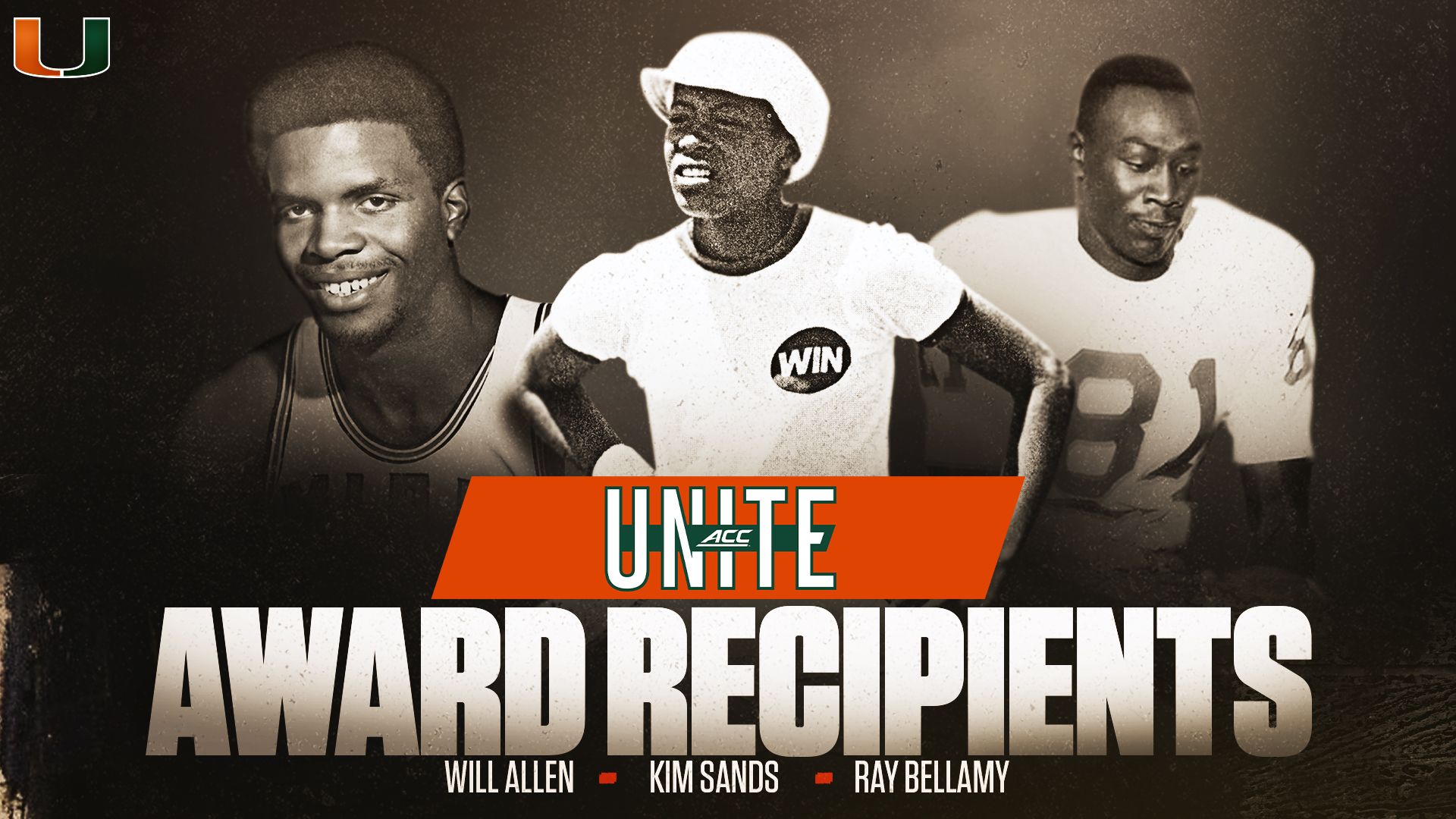 GREENSBORO, N.C. – The Atlantic Coast Conference has announced the recipients of the inaugural ACC UNITE Award, which was created to honor individuals affiliated with the league who have made an impact in the areas of racial and social justice.

The UNITE Award is an initiative of the ACC’s Committee for Racial and Social Justice (CORE – Champions of Racial Equity) and was developed and approved by its 15 member institutions. Miami’s inaugural winners were Will Allen, Ray Bellamy and Kim Sands, who were honored earlier this year as UM Trailblazer Award winners.

The UNITE Award will be presented annually to individuals who:

In the first year of the award, the league is celebrating the individuals who – according to available information – are the first male and female athletes of color to integrate the athletic teams at each current ACC institution. Each school will honor its recipients during the current academic year.

“This is a tremendous opportunity to recognize the amazing pioneers in our league,” said ACC Commissioner Jim Phillips, Ph.D. “As a conference, we are thrilled to celebrate these deserving individuals as we continue our commitment to racial and social justice. As we look to the future, our commitment to diversity, equity and inclusion will remain steadfast.”

The UNITE Award recipients were recognized as part of a 1-hour show on SiriusXM ACC Radio, Channel 371 hosted by Chris Spatola and Dalen Cuff. The show featured guests Ray Bellamy and Irwin Holmes.

Moving forward, each school will select one male and one female recipient for the annual ACC UNITE Award.

C.O.R.E was created in June 2020 to support the ACC’s commitment to social justice and racial equity. Members of C.O.R.E. include conference office staff members and campus representatives from each of the league’s 15 institutions. C.O.R.E.’s mission is to promote and encourage inclusion, racial equity and social justice through education, partnerships, engagement and advocacy.

The Atlantic Coast Conference, now in its 69th year of competition and 15 members strong, has long enjoyed the reputation as one of the strongest and most competitive intercollegiate conferences in the nation. ACC members Boston College, Clemson, Duke, Florida State, Georgia Tech, Louisville, Miami, North Carolina, NC State, Notre Dame, Pitt, Syracuse, Virginia, Virginia Tech and Wake Forest continue to build upon the cornerstones on which the league was founded in 1953 with a consistent balance of academics, athletics and integrity. The ACC currently sponsors 27 NCAA sports – 14 for women and 13 for men – with member institutions located in 10 states. Women’s gymnastics will become the league’s 28th sponsored sport in the 2023-24 academic year. In August 2019, ESPN and the ACC partnered to launch ACC Network (ACCN), a 24/7 national network dedicated to ACC sports and league-wide original programming. For more information, visit theACC.com and follow @theACC on Twitter and on Facebook (facebook.com/theACC).