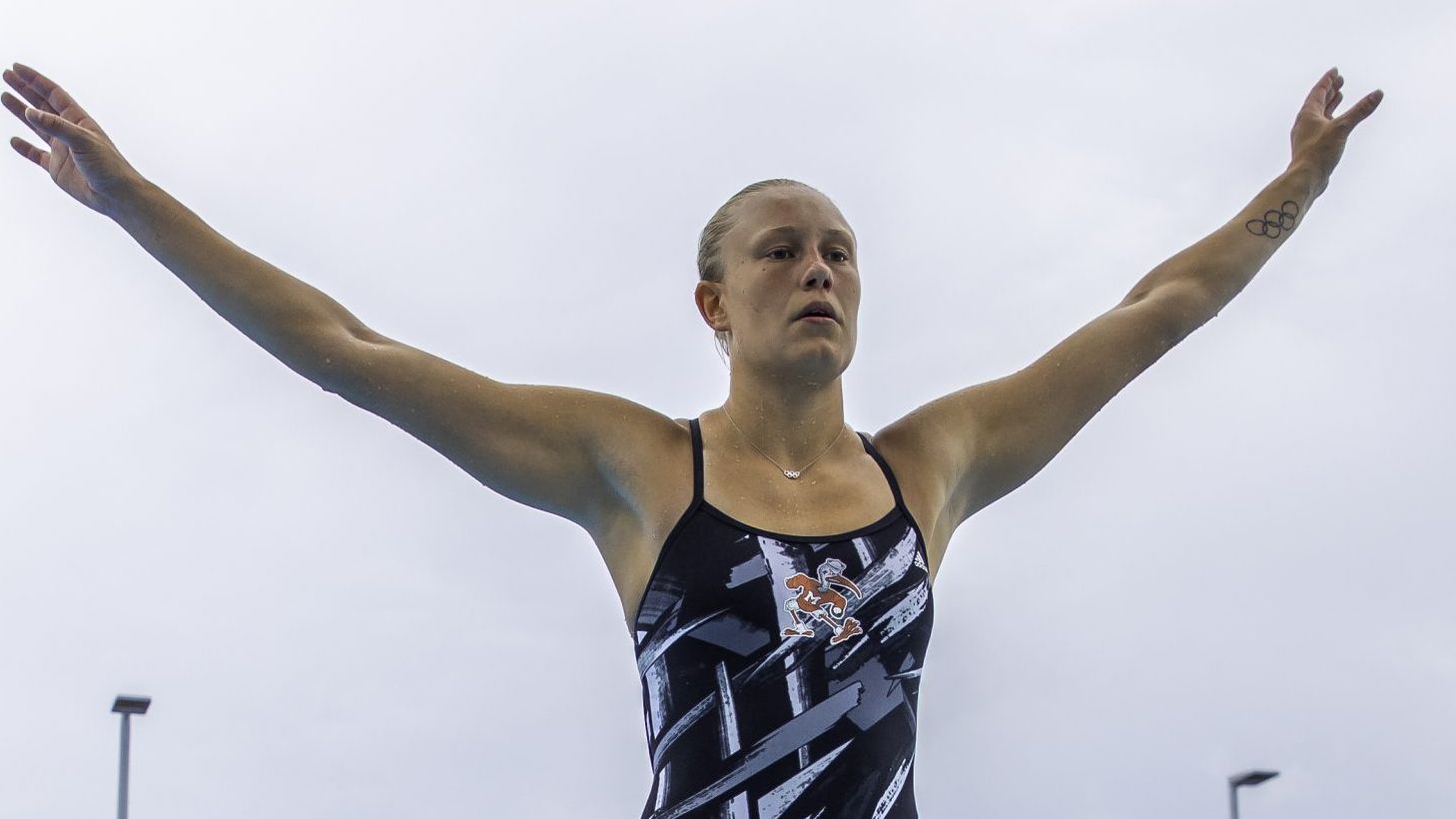 CORAL GABLES, Fla. — Springing off the diving boards at the University of Miami is something many dream of yet so few can achieve.

Coming to Coral Gables from Sweden was the best choice she made in her diving career, but she didn’t have much time to settle in to her new life in South Florida. Instead, freshman Emma Gullstrand packed up for two journeys of a lifetime.

“She basically got here and within a couple of days, we had to go dive in a meet just so she could qualify to go to the qualifying meet for the NCAA Championships,” Miami head diving coach Randy Ableman said. “Two days later, we’re on the road to go to that meet, and then she made it to the NCAA’s and actually got fourth place. It was just this huge whirlwind of her coming from another country and being thrown into the situation.”

A trip to the NCAA Championships for a freshman diver is plenty memorable in any year. And yet Gullstrand was primed for more success upon realizing there was more to come in a year like 2021.

Following years of training in the 3-meter springboard with her national team in Sweden and competing in European Diving Championships, the accumulated experience and hard work paid off. Gullstrand’s journey to the Olympic stage in Tokyo that same summer became official.

“I was there for the Olympic qualification a month before, so I knew the pool and it felt kind of like home,” Gullstrand said about arriving in Tokyo. “We didn’t have so many spectators because of COVID, which was kind of okay because we don’t have many spectators anyway in diving. So, I think it was a really good thing that this actually happened and I actually got the opportunity to go.”

The legendary experience of competing in the same world-class aquatic facility as the world’s marquee diving talent was alone enough to cherish. 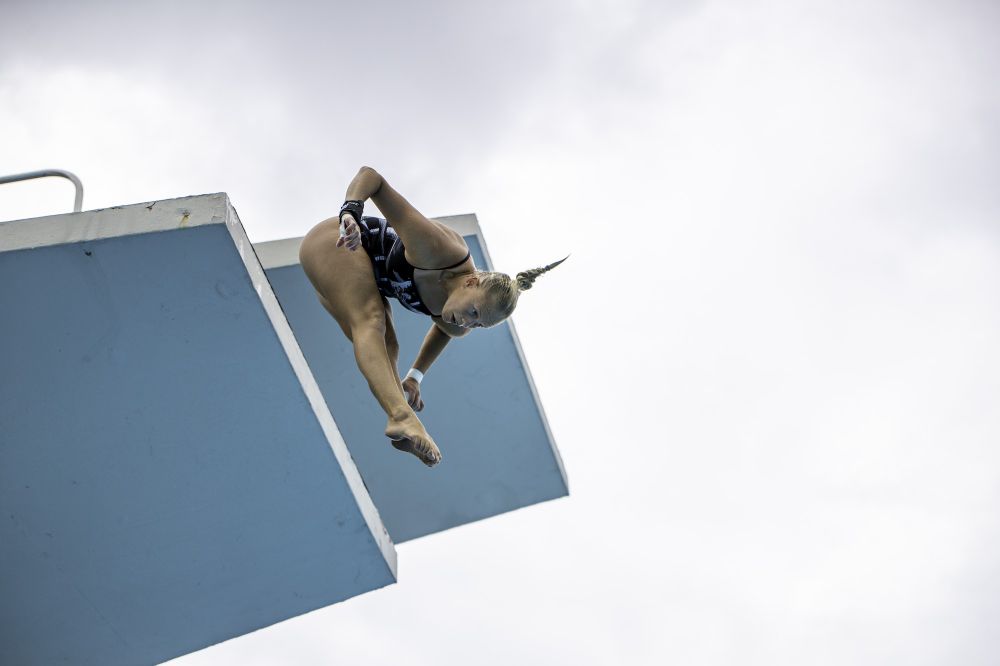 “I tried to not have any expectations, which is hard,” Gullstrand said. “It was a great experience to just be around all these amazing athletes, not just the Swedish ones, but from all around the world. It was really cool to walk outside the village and say, ‘Okay, this is just amazing.’”

The cross-globe adventure wasn’t guaranteed, however. Similar to qualifying for the collegiate level’s grandest stage in the NCAA Championships, Gullstrand was again forced to prove herself, earning her way onto the Swedish national team while the waiting part of the process lingered.

“It was kind of a rough month there with just practicing, but then when I got the news, I said, I’m going to go, and I’m going to do my best and try to not have too many expectations, because it’s the first time and it’s just going to be fun. That was the main goal,” Gullstrand said.

Gullstrand said Sweden’s national coach, Ulrika Knape, called her on a Monday morning to tell her she would be going to Tokyo.

Once she got off the phone, keeping the information a secret from her UM team was very difficult.

“I couldn’t tell anyone at all,” Gullstrand said. “It was very funny because every time I got some kind of news, every morning practice I had after that, Randy’s asking me, ‘Did you get any news?’ and every morning I said, ‘Yeah, I have.’ So, it was kind of hard to keep it to myself, and well, I told the team right away. It was a really nice way to find out.”

From making a splash in the European Championships to the Olympic Games, Gullstrand leaped a learning curve of preparing for competition against the nation’s best talent. But the growing reality of Gullstrand’s success didn’t always appear visible. 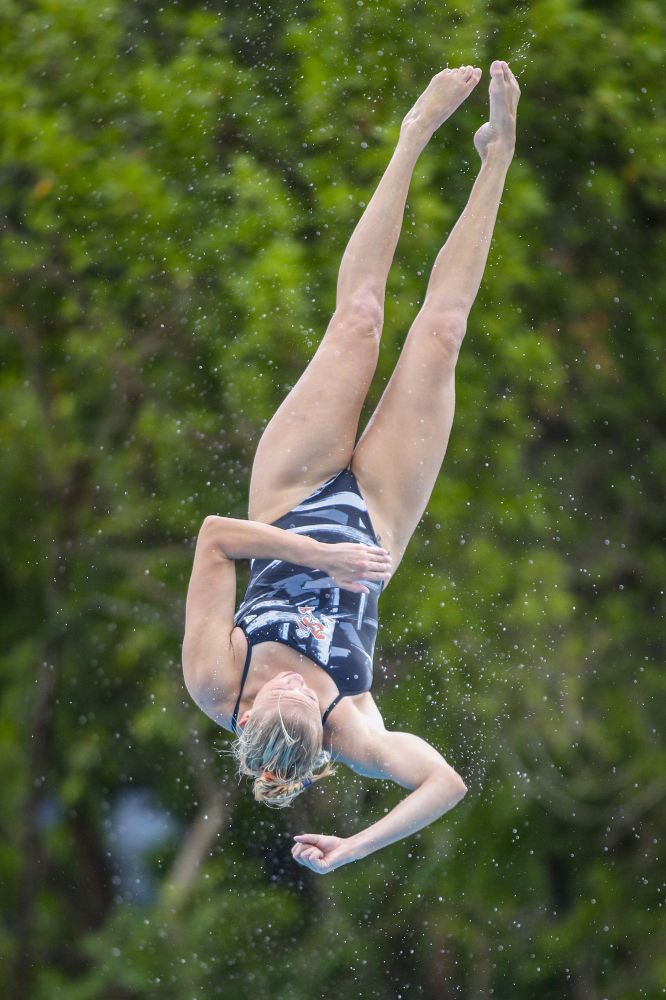 Her freshman year at UM started in remote fashion from Jönköping, a seaside town in southern Sweden, due to ongoing pandemic travel restrictions, which prevented travel to the United States. And when Gullstrand finally touched down in Miami in January, a particular change was apparent: a new coach.

Most student-athletes take a considerable amount of time to get used to a new leader, but for Gullstrand, the experience was completely different. The same coach had rallied behind her for her entire life in Sweden. Outside of a few meetings and visits, Gullstrand was working with a completely different coach for the first time, while competing and attending classes approximately 8,000 miles from home.

“When I came here, I kind of knew Randy already, and Dario, I’d met him a couple of times,” Gullstrand said. “So, what I thought about going to college was that I needed a team around me, the support system that I hadn’t had before. The guys kind of took me on and they supported me through this whole thing, this month with no news if I knew I was going to go or not. It was kind of rough, but they’ve been here and they were supporting me, and it’s been amazing and I’m so grateful that I actually got here.”

Ableman, who watched Miami’s diving program load up with Olympians in over 30 years, knew there wasn’t a better relationship to expand upon.

“She’s had one coach in her whole career and he was a great diver here in the U.S. and someone that I looked up to,” Ableman said. “He was an NCAA champion when I was in high school and we made the Olympics together in 1980, so I’ve known her old coach since I was a diver.”

Even though Gullstrand hailed from another corner of the Atlantic Ocean, the coaching staff and her teammates at UM quickly made her accustomed to the character and uniqueness of the Hurricane family.

"She’s got a good mix of being a very hard worker, always early to practice. One of the first kids there and the last to leave."

“She’s got a good mix of being a very hard worker, always early to practice. One of the first kids there and the last to leave,” Ableman said. “She takes things very seriously but at the same time, she’s extremely funny and easy to talk to and be around. We spend so much time together.”

“They do a dive, they get a response from me, so there’s this ongoing dialogue. It’s not like you write a workout on the board and they go do it. I spend a lot of time with these people and it’s important to have a good relationship and she’s very easy to get along with,” Ableman added.

The support and relationships have developed, and Gullstrand’s determination has yet to waver as her newly established family watches her flourish.

“We had just had a very short amount of time on the athletics calendar to start working together. She’s like the hardest working athlete I’ve ever had,” Ableman said. “It was just super enjoyable because we were so busy and jumped through so many hoops. We finished the NCAA’s, and she did very well there and she still wasn’t qualified for the Olympics, so I had to get her ready to go to a meet in Japan — the World Cup — and she had to place in the top 18 to even be able to go to the Olympics. It was just so cool how she dealt with the adversity of the whole situation in leaving her country.”

When added to hard work, plowing through adversity tends not to go unnoticed, especially when her family is fascinated to see each step from multiple time zones away.

“The first time I showed them around, they were like, ‘Oh my God, you’re there. That’s so cool.’ They really want to come and visit, so hopefully they get a chance some day.”

Upon her return to UM, the bar has already been raised for Gullstrand’s prowess to lift Ableman — the multi-time ACC Diving Coach of the Year — and one of the nation’s most premier programs, towards recaptured national success.

“The key to success, I believe, is to have other divers that you practice with every day that are as good or better than you. The other girls on the team are going to be pushing her. Mia Vallée is of similar ability and our freshman Maria Coburn is one of the best divers in the U.S.”

At one point, Gullstrand was diving on the 3-meter springboard in order to represent her home country in Budapest. Then, she found herself in the Olympic Village amongst so many other diverse athletes vying for medals in front of vacant seats. Now, she’s back where only progress can be forged, already being one of the female divers who can outperform almost anyone on the team, with aspirations of journeying to Paris for the 2024 Summer Olympics.

“This will be her first full season and our season’s so long. We started basically training on the first day of school and we don’t have our championships until the middle of March,” Ableman said. “There’s a lot of training between now and then, and it’s possible to be a way better diver with that amount of time. So, we’re really going to work on the little things down the road that will hopefully pay off for her.”