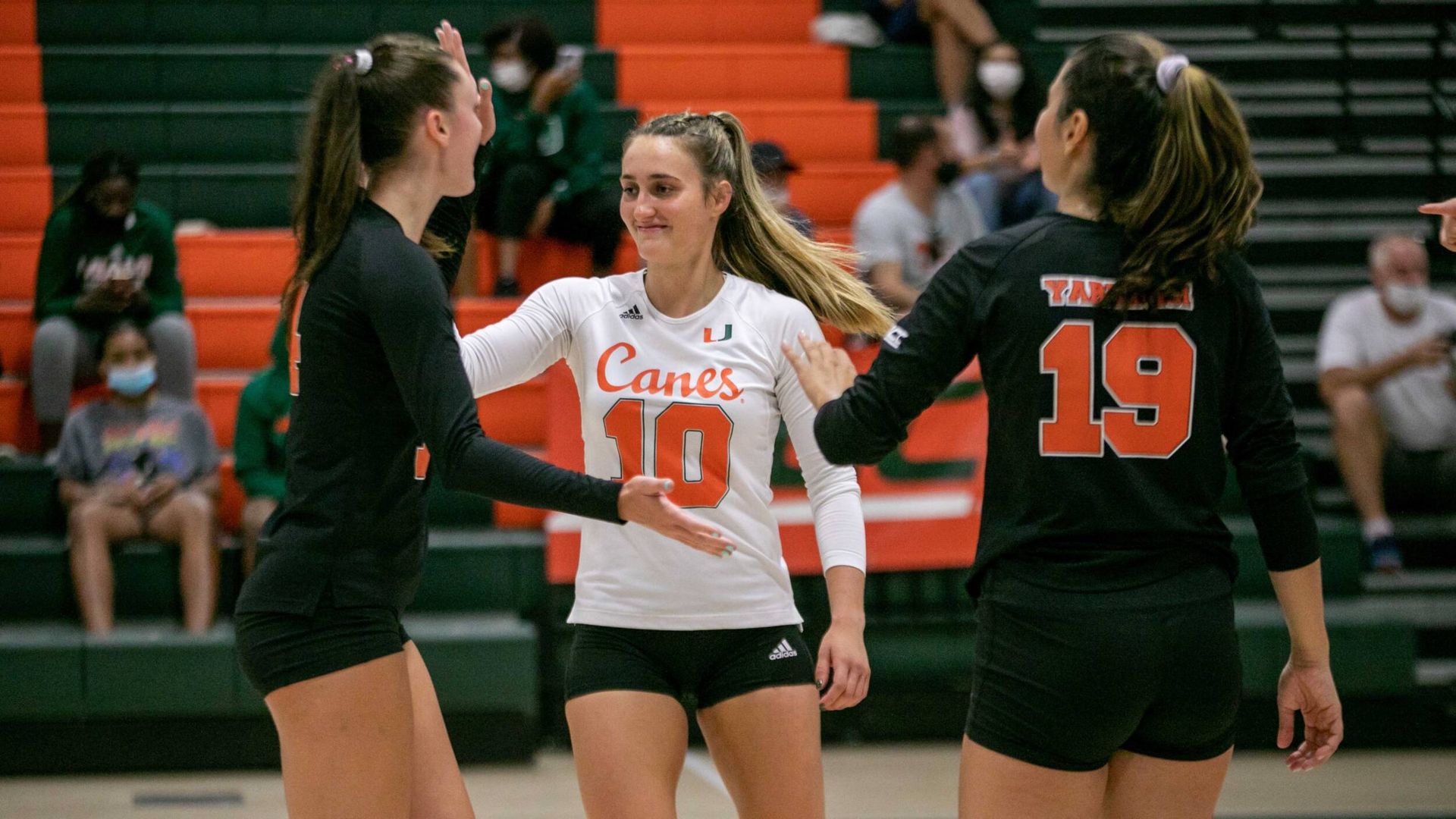 MIAMI – The University of Miami volleyball team began its 2021 campaign in style Friday, rolling to a 3-0 neutral-site triumph over Tarleton State in the FIU Invitational.

Miami (1-0) sandwiched a pair of hard-fought 25-23 victories around a dominant second-set display to earn the sweep at Ocean Bank Convocation Center.

“The first one is always unique. There is a sense of wonder, of excitement, of doubt, of fear,” Miami head coach Jose “Keno” Gandara said. “It’s always heightened, no matter how much you want to treat it like the rest of them. The goal was to test some things – concepts, lineups, stuff like that. We accomplished that and we were able to win, which is the ultimate goal.

“The pleasant surprise was the quality of some aspects of our performance,” Gandara continued. “We received serve at an elite level and were able to keep our attack errors down. All in all, I’m really pleased.”

Behind strong serves from senior libero Priscilla Hernandez, Miami used a 4-0 run early in the first set to build an 11-9 lead and later upped it to a 20-17 edge. The Texans, though, leveled the score at 20 and the two sides then traded points back and forth until it was 23 apiece.

Kills by graduate student outside hitter Janet Kalaniuvalu and redshirt sophomore outside hitter Angela Grieve, both off assists from junior setter Savannah Vach, sealed the opener, 25-23, for the Hurricanes.

After the teams split the first 18 points of set two, Miami rattled off a 9-3 run to go in front, 18-12. Tarleton State did not pull any closer than four the rest of the set, as the Hurricanes tallied a 25-18 victory to enter the intermission.

Miami hit .357 in the second frame, notching 19 kills and just four errors on 44 swings. On the other end, Gandara’s team limited Tarleton State to a clip of just .184 in a dominant second-set performance.

With the two sides deadlocked at 15 in set three, Miami won four straight points on its way to taking a commanding 24-18 lead. Tarleton State, however, fought off five match points to trim its deficit to one.

It appeared the Texans then pulled even at 24, but a Miami challenge led to an overturned call, with the attack ruled out, giving the Hurricanes a 25-23 decision to clinch the match.

Miami finished the day with a 51-37 edge in kills, while outhitting the Texans, .285 to .185. Grieve paced the victors with a co-match-high 12 kills, while freshman outside hitter Peyman Yardimci added 10.

Hernandez led all players with 17 digs, with Yardimci notching 12 of her own to record a double-double in her collegiate debut. Freshman defensive specialist Hanna Bissler also had 12 digs, while Vach finished with a match-best 34 assists.

The Hurricanes continue play in the FIU Invitational Saturday at 4 p.m. when they face homstanding FIU, with action televised live on CUSA.tv.