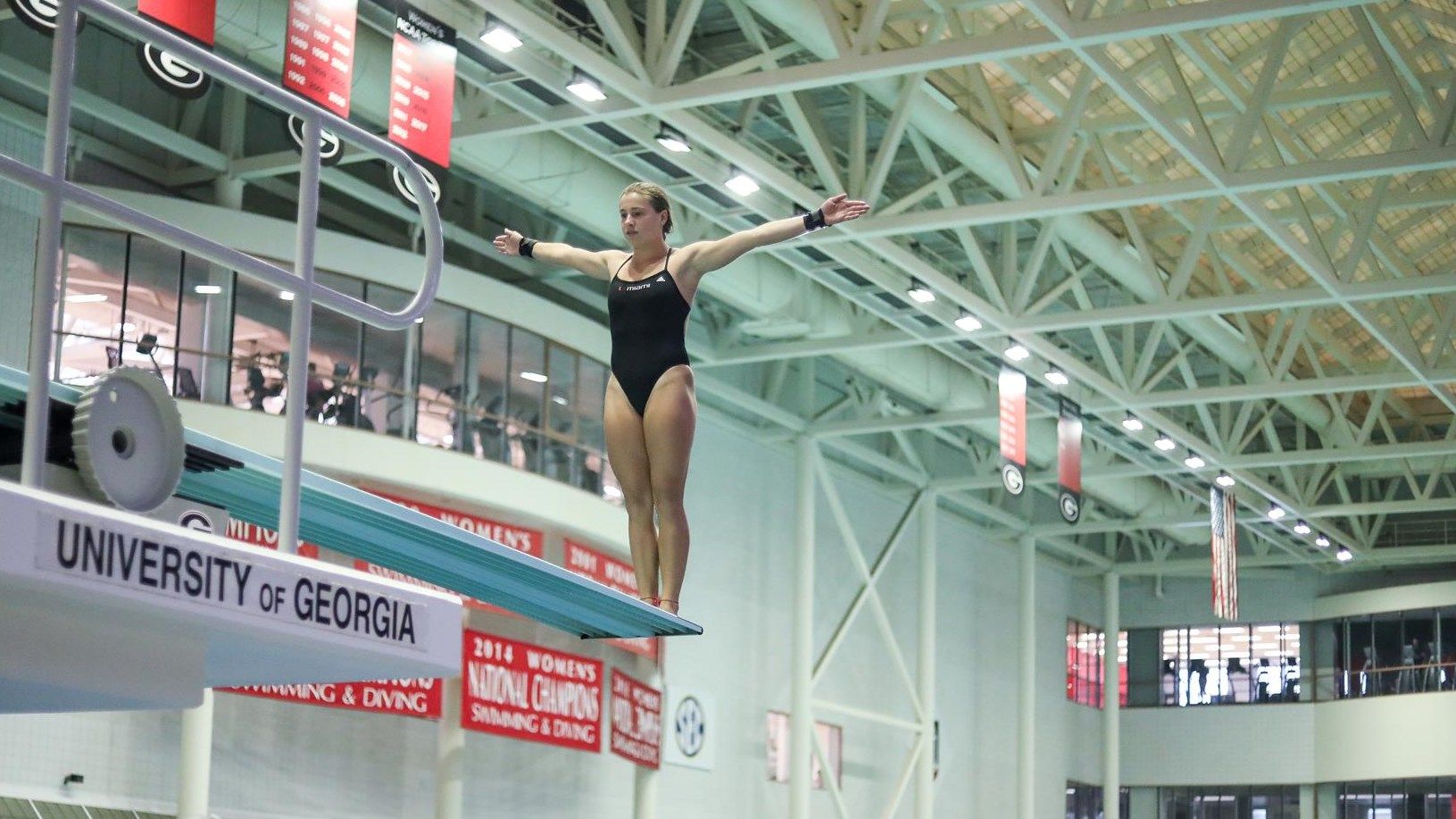 Nothing Taken for Granted

GREENSBORO, N.C. – For two of the more accomplished international divers competing in the collegiate space, Thursday’s competition at the Greensboro Aquatic Center may appear a rather ordinary affair.

But after the events of the last year, Mia Vallée and Emma Gullstrand aren’t taking any chance to dive for granted.

Both divers expressed their gratitude for the opportunity to do what they love when the 2021 NCAA Women’s Swimming & Diving Championships kick off in earnest Thursday. Gullstrand, a true freshman, and Vallée, a second-year diver, will be competing in both springboard events against the nation’s top performers.

The 1-meter springboard is set for Thursday, while 3-meter will take place Friday.

“I don’t think I have words for how excited I am, actually,” Gullstrand said. “It’s huge. I have a great team here. I love it. If I just have fun and relax a little bit, it’s going to go great. It’s a competition and I can compete again – I’m grateful for every opportunity there is.”

Vallée should be preparing for her second trip to the NCAA Women’s Swimming & Diving Championships, which are set for March 17-20.

But, like those of many athletes across the country, Vallée’s hopes were dashed when the 2020 NCAA Championships were canceled due to the COVID-19 pandemic.

“I was really disappointed when they canceled it,” she said. “I had been working all year to make the meet, and as a college student-athlete, NCAAs are the biggest meet. I was proud of myself for having qualified in my first year and super excited to see what it was going to bring. When it got canceled and we all had to go home, I was so disappointed. I’m really excited to get a second chance this year.”

While Vallée, an accomplished Canadian international diver, saw her dreams of an NCAA title end prematurely as a true freshman, Gullstrand watched as one international diving competition after another was canceled in her home nation of Sweden.

“First it was Olympics, then Swedish Nationals…motivation to continue training disappears,” Gullstrand said. “You don’t want to train, you don’t want to go to the pool, because you have nothing to train for. I had to do something to switch it up.”

Gullstrand, waiting for her chance to enroll for the spring semester, would FaceTime head coach Randy Ableman, doing pushups outside in the snow in frigid Sweden to showcase her readiness to compete.

Gullstrand has only been stateside for a month, but impressed enough at the Bulldog Invitational in Athens, Ga., to earn the right to represent Miami at the Zone B qualifiers in Greensboro.

“Motivation-wise, this last year has been very up and down,” Gullstrand said. “But it worked out – I got here, right? I’m so grateful.”

Vallée, who Ableman said has been “rock solid” for nearly the entirety of the season, was a gold medal winner at the ACC Swimming & Diving Championships in February at the Greensboro Aquatic Center.

But it was at Zone qualifiers where both shined brightest, dominating the competition for the right to return to…you guessed it, Greensboro.

“We’ve joked about how often we’ve been here, but it certainly helps,” Ableman said. “Every board flexes a little different – they’re very used to that. The lighting in here, just the visual cues while they’re somersaulting….it helps that we’ve been here a couple times in the past month. I’m very comfortable that we’re having the NCAAs here in Greensboro.”

Vallée, one of the top performing divers in the country this season, said it was last year’s postseason run in February and March that forced her to adjust the way she prepared for meets.

“I used to be stressed out at meets and get in my own bubble and only think about the meet,” Vallée said. “I did that at ACCs last year. I really did not do well. I stressed myself out too much, especially with the meets here – there are so many girls, it’s so long in between dives and it’s not what I used to.”

It was former University of Miami diver Cheyenne Cousineau who helped Vallée refocus her energy.

“She told me, ‘You need to treat it like a practice, or else these meets can be too hard, too long and too frustrating.’ I did it last year at Zones and it worked amazingly,” Vallée said. “I remembered that at ACCs this year. I said, ‘I’m going to change the way I compete.’ I know I can do these dives well in practice, I don’t need to do them any different in competition.”

Both stressed the importance of maintaining focus and a calm mindset heading into Thursday.

“After not competing for a year, you just try to take it one day at a time,” Gullstrand said. “Being here for two weeks, I felt like I had a great team behind me. I haven’t been able to compete like the rest of the world, ever since the shutdown. I try not to stress out, because it’s not too much you can expect for someone who just got here. It has been amazing and I have loved every second of it.”

After an impressive spring where both divers have showcased their resiliency, Ableman said he is looking forward to watch both divers compete over the next two days.

“The moment won’t be too big for them tomorrow,” Ableman said. “I really look forward to them getting off to a good start in the prelims, with 50 women of similar abilities. The only kids feel great after the preliminaries are the ones that make the top eight. There’s not much room for error, no how good you are. I’m optimistic that we’ll have a good day tomorrow.”