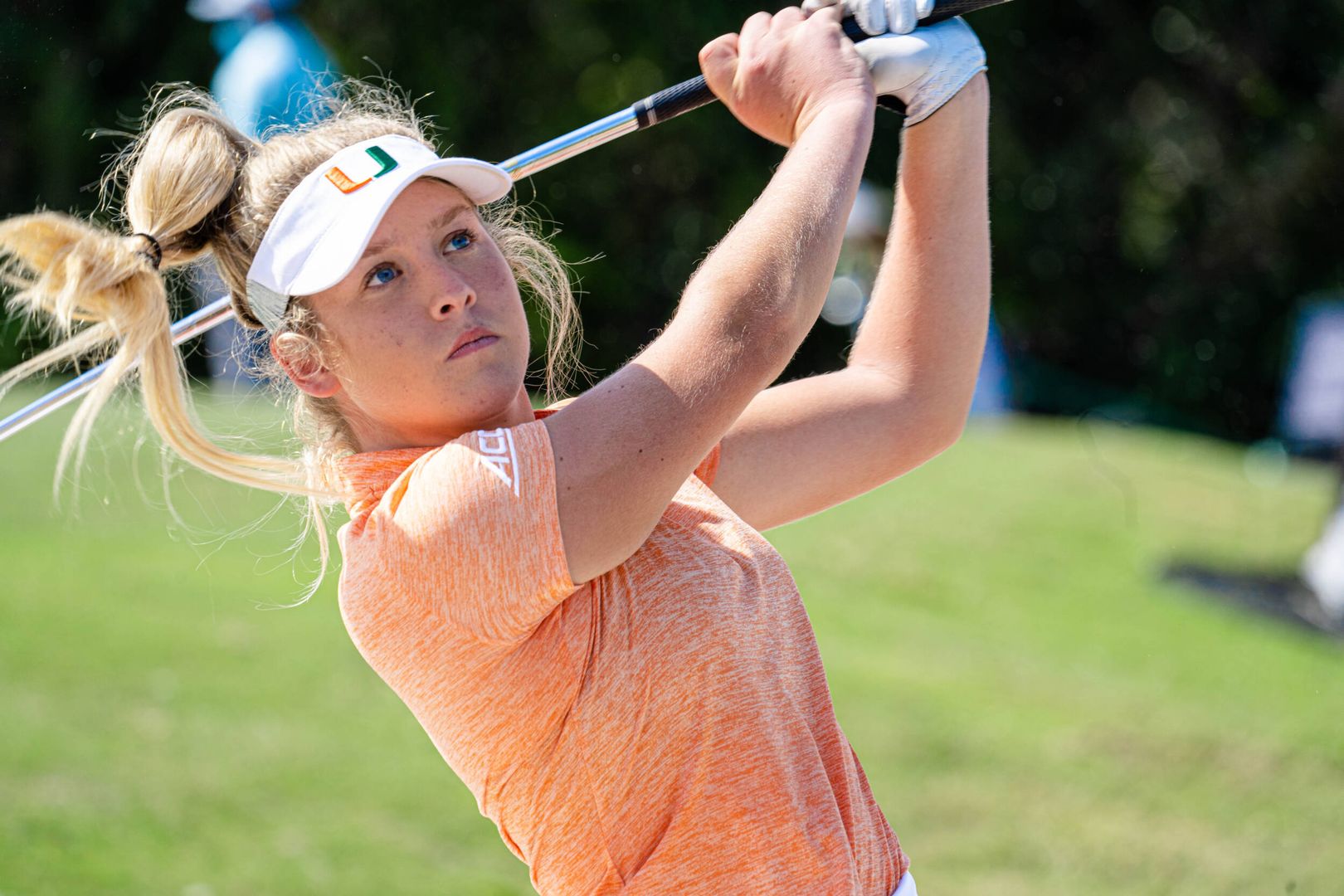 Historic Final Round at Briar’s Creek

JOHN’S ISLAND, S.C. –  It was a historic final round for the University of Miami golf team Tuesday at the Briar’s Creek Invitational.

As a team, the Hurricanes posted the second lowest relative-to-par score in program history and secured runner-up status at the par 72, 6,110-yard Golf Club at Briar’s Creek.

Entering the final round 13 strokes behind tournament leader and host, College of Charleston, at 26-over-par, Miami collectively shot 16-under, 272 in the third. Overall, the Hurricanes ended the event at 10-over-par, just one stroke behind the Cougars.

“We were thrilled today,” Miami head coach Patti Rizzo said. “We know that this is what this team is capable of, but obviously, we have to become better wind players. I think they’re good up to a two-club wind, but when it gets to be a four-club wind, they don’t trust themselves enough.

“Needless to say, we had a really great finish and it puts us on a high for our next tournament,” Rizzo added. “I’m very proud of all of them. They hung in there and never gave up. This is one of the lowest rounds we’ve ever had, I wish every day could be like today.”

Leading the way for Miami, Guseva finished among the top five for the second-straight event, placing third at three-under-par.

Entering the final round tied for fourth at 1-over-par, the Moscow native carded four birdies and an eagle to shoot four-under, 68 on Tuesday.

Following closely behind, Kristyna Frydlova moved 24 spots up the leaderboard on Tuesday, registering six birdies in the final round to finish five-under, 67.

Overall, the junior secured a top-10 individual finish with a four-over-par performance.

On a historic Tuesday afternoon, Byrne rebounded from a 17-over-par tally through the opening two rounds in style.

Carding seven birdies and an eagle through the final 18 holes, the Cork, Ireland, native matched the program record for the lowest round total at eight-under, 64.

“Honestly, it still hasn’t sunk in properly, but today was just one of those days that it just clicked,” Byrne said. “I hit some really good irons and holed some good putts. After my day yesterday I was so confused, as I knew coming into the competition I was playing really well. Today, I literally just forgot about everything swing related and committed to every shot and it worked. I was just chilling out there today, not thinking too much, just swinging.

“To know that I tied for the school record really is just an amazing feeling right now,” Byrne added. “To do it in my freshman year just makes it that much better. I’m delighted to have helped the team to a second place finish. It’s always nice to climb the leaderboard a bit on the final day.”

The tally ties current pro and 2016 national runner-up Dewi Weber, who set the mark on Oct. 10, 2016 at the Betsy Rawls Invitational.