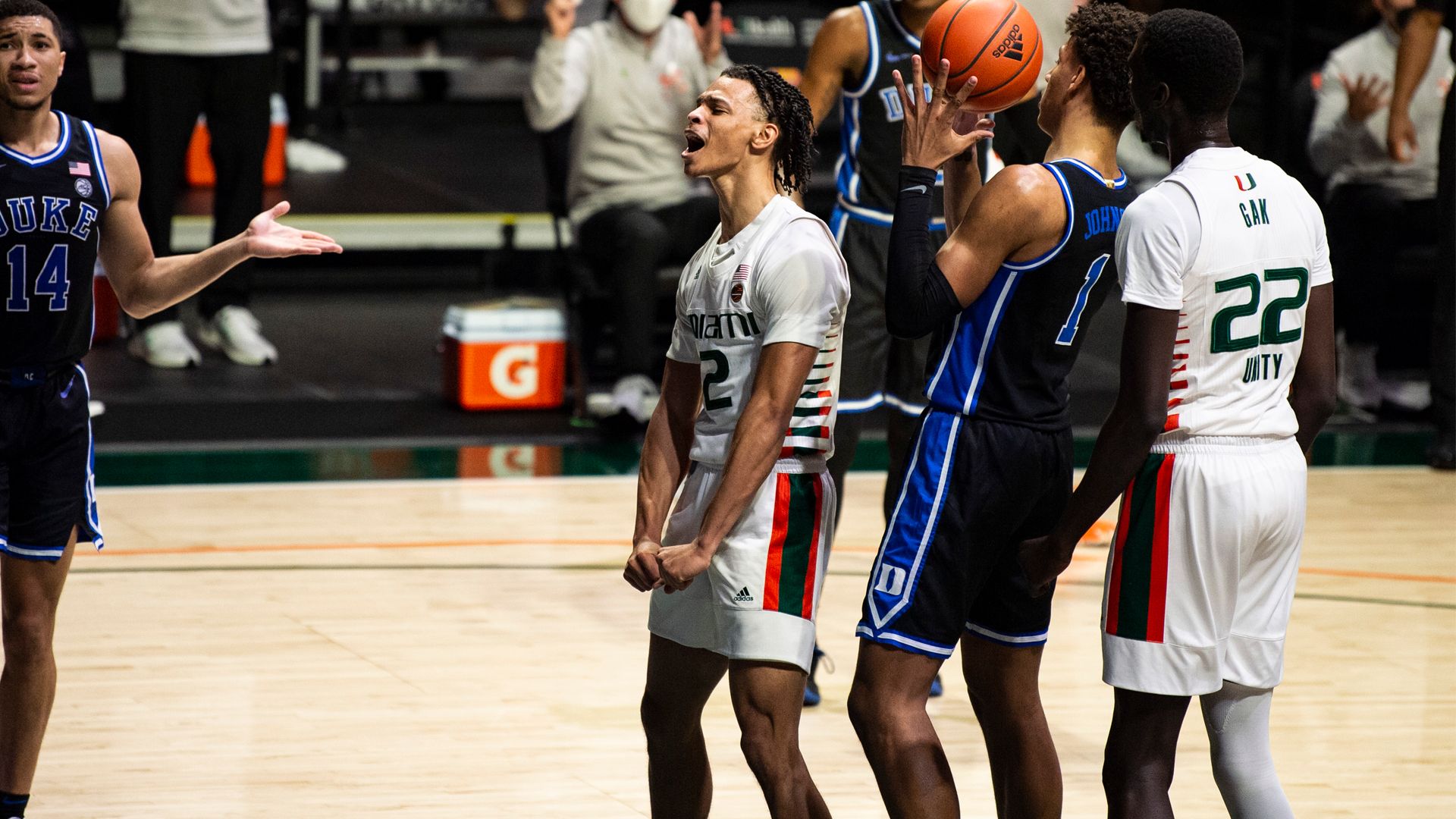 Senior guard Elijah Olaniyi scored a season-high 21 points for the shorthanded Hurricanes, who picked up their sixth win over the Blue Devils in head coach Jim Larrañaga’s 10-year tenure, a number only North Carolina has reached during that span.

“First of all, the energy and enthusiasm yesterday was absolutely terrific; the best it has been in a month,” Larrañaga said. “I was very excited to know that our players have not given up, that they’re going to come out and play really hard, and that they were willing to accept the change in the starting lineup [with us going small] and have every guy still be very focused and come ready to play. We got a contribution from all seven guys that played. Elijah obviously had a great game, but it was really a total team effort.”

Duke sophomore forward Matthew Hurt eventually cut the deficit down to two, 75-73, on a trio of free throws with 14 seconds to go. With 12.5 to play, Walker then hit two free throws to push the advantage back to four, but a tip-in by freshman forward Jalen Johnson at the other end sliced the deficit in half with 4.9 on the clock.

After Miami sophomore guard Isaiah Wong missed the front end of a one-and-one moments later, Duke brought the ball over half-court, but did not get a shot off and the Hurricanes held on for the win.

“When your spirit is good, you can handle your mistakes and some of the adversity you face,” Larrañaga said of how his team closed the game out. “When your spirit is not good—when you’re down in the dumps, when you’re sad, melancholy—you have a hard time fighting back. I thought today, the best thing that happened was down the stretch when we still made a number of errors, we didn’t let it get us down. We kept still fighting and doing a really good job.”

Olaniyi co-led all players in points and rebounds (seven), plus notched a game-high three steals. He shot 8-of-10 from the floor and 3-of-5 from long range, setting season bests in makes in both categories.

Wong finished with 16 points on 6-of-10 shooting to go along with three rebounds, three assists and a career-high two blocked shots in 39 minutes of action. Walker also scored 16 points, two shy of his top mark, and went 6-of-9 from the floor to set a career best in makes.

Hurt matched Olaniyi with 21 points, but Miami held him to 1-of-6 shooting from 3-point range after he entered shooting 44.4 percent from deep on the season. Sophomore forward Wendell Moore Jr., scored 18 points on 7-of-9 shooting, freshman guard DJ Steward logged 14 points and Johnson scored 13 to go along with a co-game-high seven boards.

The Hurricanes finished the game with a 52.5 percent (31-of-59) mark from the field, its second-highest of the season. Miami also posted its second-best 3-point percentage of the year, totaling a 53.8 percent (7-of-13) mark.

The Hurricanes now have five days until their next outing, which is scheduled for Saturday at noon against No. 16 Virginia Tech, with action set to be televised live on ACC Network from the Watsco Center.

MIAMI HURRICANES POSTGAME NOTES
– The Hurricanes moved to 8-22 all-time against Duke, including 6-9 at home and 6-7 in Larrañaga’s tenure.
– North Carolina, which plays Duke at least twice every year, has eight wins over the Blue Devils in the last 10 seasons, as the only other team besides Miami with at least six.
– Miami has 12 wins over Duke and North Carolina in Larrañaga’s tenure, trailing only Duke (13) and Virginia (14) during that stretch.
– Larrañaga, who entered the game with the 11th-most victories of any active Division I coach, is now 667-457 in 37 years as a head coach, including 197-123 in 10 seasons at Miami.
– For the first time this season, Miami used a starting lineup of Olaniyi, Walker, Wong, sophomore guard Harlond Beverly and redshirt senior guard Kameron McGusty.
– The Hurricanes have now used nine starting lineups in 2020-21, including a different one in each of the past four games.
– Miami once again played without three of its four returning starters: senior guard Chris Lykes (left ankle), redshirt senior center Rodney Miller Jr. (right knee, season) and redshirt senior forward Sam Waardenburg (left foot, season).
– In addition, the Hurricanes were again without freshman guard Earl Timberlake, who is out indefinitely with a lingering left shoulder injury.
– Olaniyi returned to action after missing the last two games with a left shoulder injury of his own.
– The only game this season in which the Hurricanes shot better from the floor was on 12/29/20 at No. 24/RV Virginia Tech, when they tallied a 53.6 percent (30-of-56) mark.
– The lone game in 2020-21 in which Miami posted a better 3-point clip was its last outing at Wake Forest on 1/30/21 when it shot 56.3 percent (9-of-16).
– From 11:43 to 5:48 of the second half, Miami made eight of its nine field-goal attempts.
– The last time Miami shot 60 percent in a half was on 12/4/20 when it registered exactly that mark, on a 15-of-25 clip, in the second frame against Purdue.
– The Hurricanes last shot at least 60 percent in a half in an ACC game on 2/12/20 against Boston College, when they also logged a 15-of-25 ledger.
– The 60.7 percent clip was Miami’s best in a half since shooting 66.7 percent (20-of-30) in the first half at Illinois on 12/2/19.
– In addition, the 60.7 percent mark was the Hurricanes’ top tally in frame in ACC play since recording a 65.4 percent (17-of-26) clip on 1/7/18 against No. 24/RV Florida State.
– Beverly surpassed 150 rebounds at Miami.
– Wong, who eclipsed 1,250 minutes played as a collegian, scored in double figures for the 25th time, including the 15th in 2020-21.
– Olaniyi tallied double-digit points for the 66th time, including the seventh at Miami, and logged 20-plus points for the 19th time, including the first at Miami.
– Olaniyi also moved past 1,000 field-goal attempts in his career.
– Walker scored in double figures for the eighth time, including the seventh this season and for the fourth consecutive appearance.
– In addition to setting a career high in made field goals, Walker’s two assists and two steals both matched his top mark, while his 16 points set a new top total in ACC play.
– Brooks tied a career high with three assists, a mark he has only reached once previously, on 12/20/18 against UCLA, while playing for Cincinnati.
– Redshirt junior forward Deng Gak recorded multiple assists in a game for the first time as a collegian.