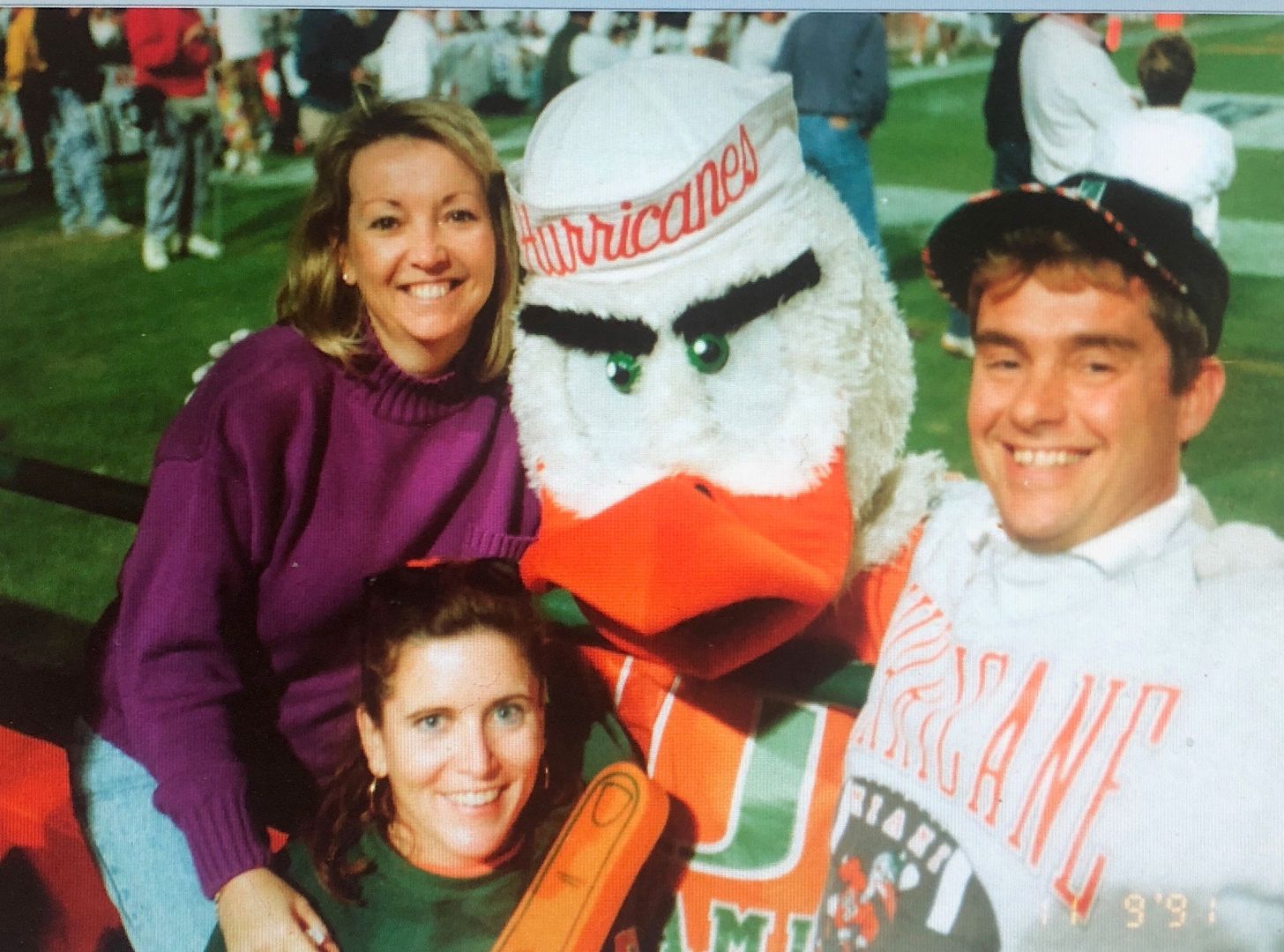 What began as a teenage fascination for a kid from Ohio has evolved into lifelong fandom.

In love with the ocean and the thought of earning a degree in marine biology from “Suntan U,” Keith Buehner came to Miami Beach on vacation in 1969 for spring break. His parents told him the cost to attend Miami was too prohibitive, but his dream never went away.

“I don’t know what it was, but just the thought of going to college right near a beach,” Buehner said. “I had this fascination to come to Miami and live by the ocean. It was always calling me.”

Fast-forward 16 years, and Buehner and his parents, still living in Ohio, were on a family trip to Sanibel Island in 1985 when he decided to rent a car and drive to Miami. A licensed nurse, he had been looking at pictures and write-ups on various Miami hospitals in nursing magazines.

When he was offered a position at Jackson Memorial Hospital, he accepted on the spot. He “was mesmerized” by his first-ever Hurricanes Football game, a matchup against the Florida Gators at the Orange Bowl.

“September 7, 1985. I’ve only missed four home games since then, and haven’t missed one since 1998, for my parents’ 50th wedding anniversary in Ohio,” Buehner said.

His worst memory as a Canes fan is an easy choice: the 2003 Fiesta Bowl.

“My dad had to wear half-Hurricane, half-Ohio State gear,” he said. “I invited my sister, who was an OSU grad, for fun. We stayed in Las Vegas and drove across the desert for the game. After the game, that drive back was the worst drive of my life. I wouldn’t speak to anyone in my family for a week.”

Not many fans can say they’ve had season tickets to the Miami Hurricanes football program in their family for 93 years. But when your father and uncle were the ones to purchase bonds for the construction of the Orange Bowl, it makes for a unique situation.

Jordan would attend games at the Orange Bowl with friends when she was young, able to run through the concourse of the Orange Bowl from her seats around the 20-yard line close to her parents, who had seats near midfield.

She said she could probably make the trip from her seats to her parents’ seats with her eyes closed.

“I knew the stadium like the back of my hand,” Jordan said. “I grew up there.”

To say Jordan was destined to be a Hurricane is an understatement; born across the street from campus at Doctors’ Hospital, she graduated from Miami in 1976 at the age of 19. Her license plate reads UM-CANES; she first got the tag in the 1970s when the opportunity to personalize plates in the state first began.

“My dad wasn’t alive to see the first national championship in 1983,” Jordan said. “I was crying, wishing he was there with me to see it in a stadium he helped build. Then I realized, he had the best seat in the house.”

You’ve probably seen Derek Coe right near the arrival point for Miami’s team buses for Hurricane Walk at Hard Rock Stadium. He’s in the same spot, each and every home game.

“I’m at Cane Walk an hour before those kids come to the stadium,” Coe said. “I’ve been in the same spot for the last six or seven years. I want to make sure nobody else gets my spot. I know the events and staffing people, the security, the cops who are stationed right there…that’s part of my gameday tradition.”

Coe’s support of Miami began in 1986. He moved to Broward County at the age of five, and as a Pop Warner football player, loved rooting for The U. One of the first games he ever watched was Miami’s Fiesta Bowl loss to Penn State. Despite the outcome, he fell in love with the program.

Coe bought season tickets for the first time in 1999, signing on for seats in the West End Zone of the Orange Bowl, and has been a season ticket holder ever since. Now, he makes the short drive from Coral Springs on Saturdays, where he and his wife, Maria and son, Grayson, hang out with family and friends before heading to Hurricane Walk and then inside the stadium for pregame.

“If you put that U on the side of your helmet, I’m supporting you 100%, win or lose. We live and die for this university.”