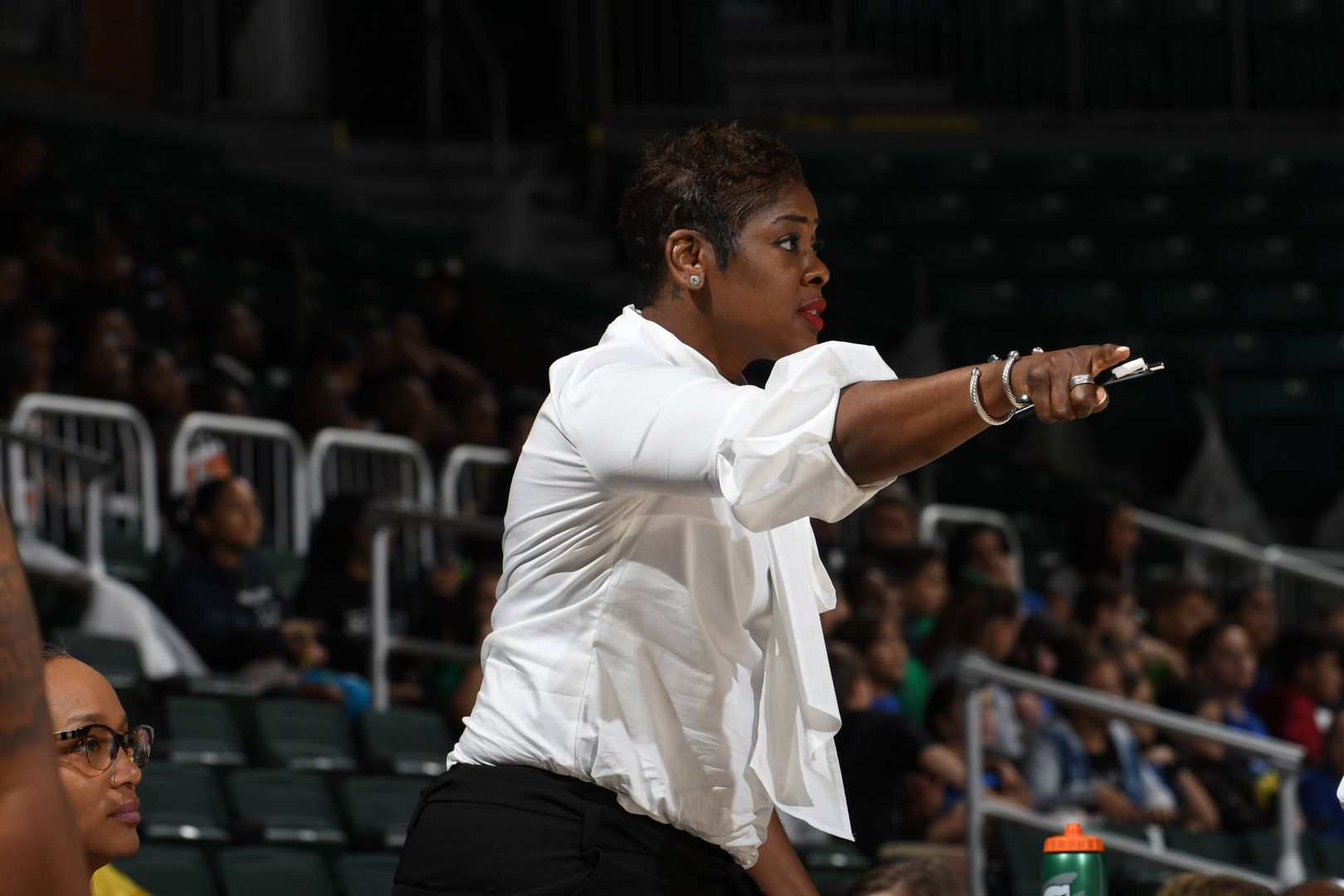 Octavia Blue: Basketball and Beyond

From growing up in South Florida to coaching the Canes, Blue dons UM gear with pride. But it is her journey back to The U that shaped her into the coach she is today.

Blue’s first foray into basketball came during a middle school physical education class. While the other girls were jumping rope and playing hopscotch, Blue wandered over to the basketball hoops. Despite never having played basketball before, she picked up a ball and started shooting.

She was a natural and quickly caught the eye of her physical education teacher.

“He came over and asked me why I didn’t play for the basketball team,” Blue recounted. “I told him, ‘I don’t know how to play,’ but he said he’d teach me and the rest is history.” 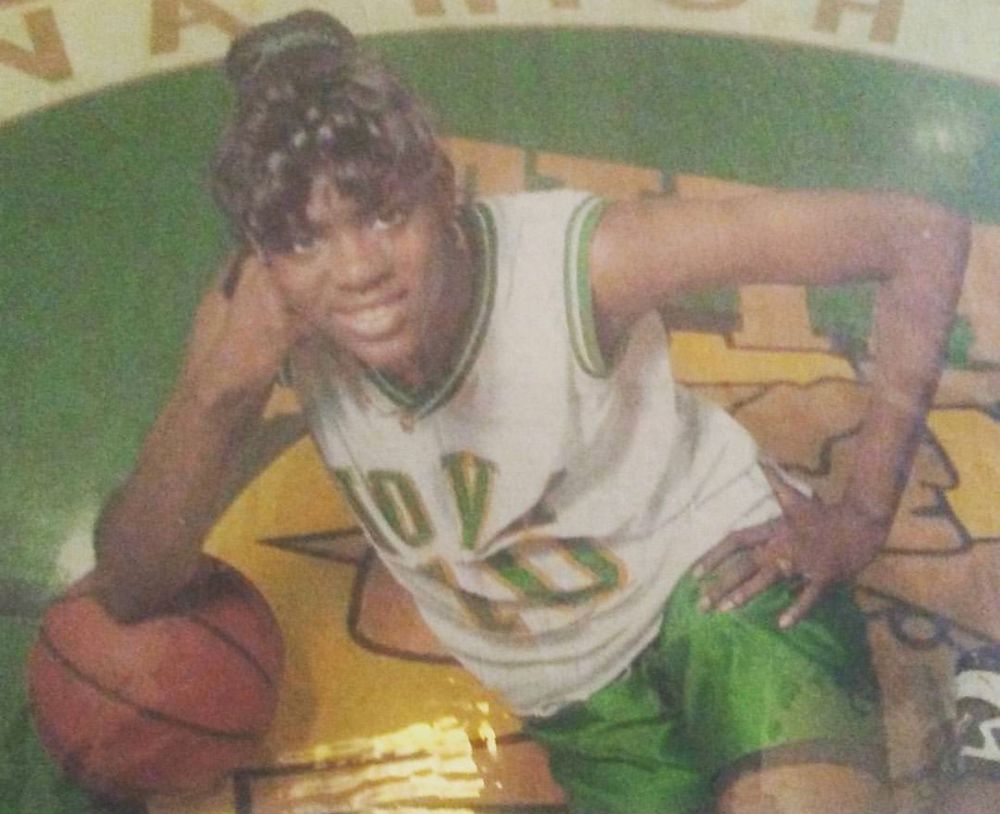 Blue’s involvement in basketball spans over 20 years and is highlighted by lessons she has learned along the way.

Growing up in South Florida, Blue knew of the University of Miami and even attended some games with her local high school team, watching Canes greats like Vicki Plowden.

During the early stages of the recruiting process, Blue had offers from programs like Kentucky and Arkansas, and was strongly leaning towards attending a school out-of-state. However, her mom wanted her closer to home and made her take a visit to Miami.

“When I stepped on campus, even though my mind was completely made up on going out-of-state, it flipped in a heartbeat,” Blue said. “I felt that Miami was home and I wound up committing to UM right after my visit.”

During her four years as a Cane, from 1994-98, Blue not only etched her name in the record books as one of the greatest basketball players in program history, but also grew as a young woman. The people around her on campus helped shape her into who she is today.

“I love the people and I love what this school stands for,” Blue said. “There isn’t a place in the country that I travel to that people don’t throw up their U every time they see me and I love being a part of that.”

“Coach Blue has more pride for this university and this program than anyone I’ve met. Her jersey is retired, she’s in the UM Hall of Fame and she expects her players to have Miami pride.” – Katie Meier

On April 28, 1998, Blue’s dreams of playing professional basketball came true as she was selected as the 15th overall pick in the WNBA Draft by the Los Angeles Sparks. But with getting drafted came the realization that she had to actually make the team.

In a new city, surrounded by her basketball idols such as Lisa Leslie, Blue worked hard to get over the “awe period,” as she calls it, and to just perform.

“You have to continue to be who you were when you were drafted because that is the player that they wanted,” Blue said.

The worst mistake you could make, in Blue’s opinion, is to try to reinvent yourself just to make the team. If you try really hard to be a player that you are not, you will just end up scared and not playing at your peak level. Staying true to her game saw Blue through three seasons in the WNBA, taking the floor in 59 games. 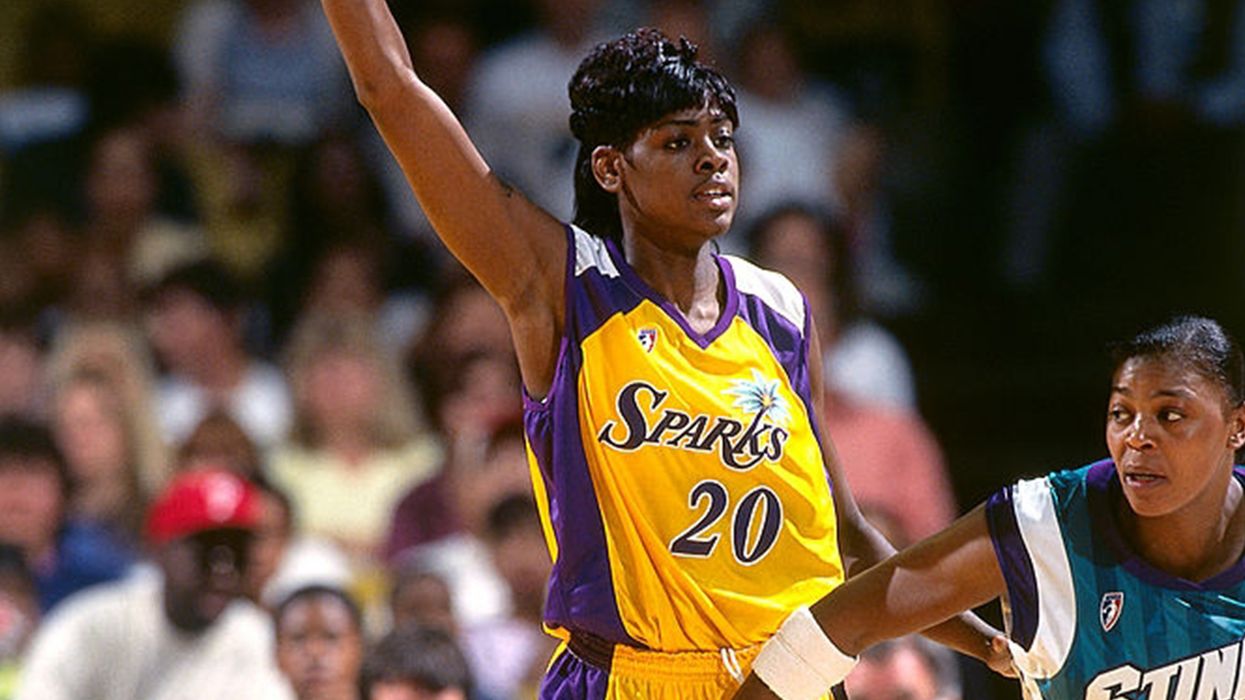 When she wasn’t playing in the WNBA, Blue spent eight seasons overseas playing in professional leagues in France, Greece, Israel, Poland and Turkey.

“My time overseas was really difficult during my first year in Turkey,” Blue said. “At 22 years old, I was leaving my home for a little town in a place where they don’t speak English. People would stare at me everywhere I went.”

Typically, a few Americans can be found on each team overseas, providing some support for each other while they are away from home. That was not the case for Blue during her time in Turkey. The adjustment to the European style of basketball, along with the lack of people with whom she could relate put some serious doubts into Blue’s mind about whether she really wanted to play overseas.

However, because her heart was set on playing professional basketball, Blue took the chance to play abroad and made it something more.

“I stuck it out and, had I not made the decision to stay, I don’t know that I would have had the career that I did,” Blue said. “I also don’t think I would have learned how to overcome adversity and tough things out. It really shaped who I am.”

Blue’s transition to coaching was unique in that the forward effectively retired without knowing she was doing so. During her last season in Poland, Blue snapped her Achilles tendon in a game, forcing her to head back to the United States to recover.

It was while she was home in Florida doing rehab that she fell into coaching.

“I got a call from one of my old coaches at Miami, Robin Harmony, who was the head coach of St. Thomas University in Miami, asking me to come be her assistant coach,” Blue said. “I told her that I’d never really had a desire to coach, but I agreed to come and help the post players. I stopped by the first practice and it didn’t take long to get me hooked.”

The interaction with the players, who reminded her so much of herself in college, is what really drew Blue to coaching. She enjoyed showing them how to put in hard work and how to be great, and wanted to continue to do that at the next level.

When she was looking to take that next step, she turned to a local Division I head coach in the area, Miami’s Katie Meier. Blue told Meier of her prospective interview with St. John’s and the Miami coach helped her prepare for the process.

The preparation paid off as Blue landed her first Division I coaching job at St. John’s in the fall of 2008. 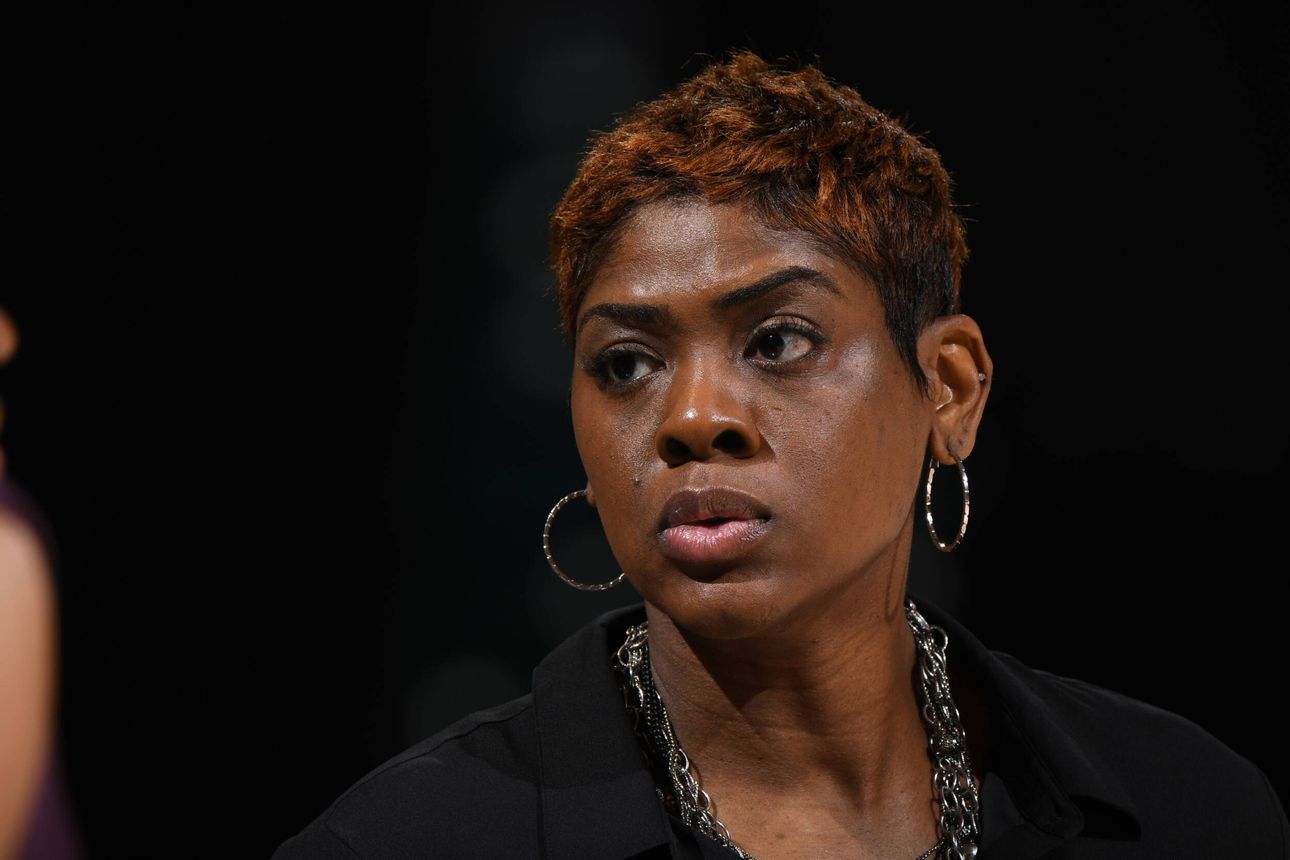 While at St. John’s, Blue expanded her knowledge of the game. She learned that there are so many intangibles that go into coaching, from recruiting to scouting to preparing for a game.

“When you love something and are passionate about it, you want to learn everything about it,” Blue said.

Blue’s dedication to the game could be seen during the time that she spent in the gym with her players and when she was on the road for a recruiting trip. It was at an AAU tournament that her passion for the game caught the eye of then-Georgia Tech head coach MaChelle Joseph.

Joseph prided herself on being the first coach to the gym at tournaments, but someone kept beating her to the gym at this particular event: Blue. For Blue, spending long hours in the gym on recruiting trips was just part of the job that she loved.

“I attacked coaching the same way I did as a player, with eagerness and passion,” Blue said. 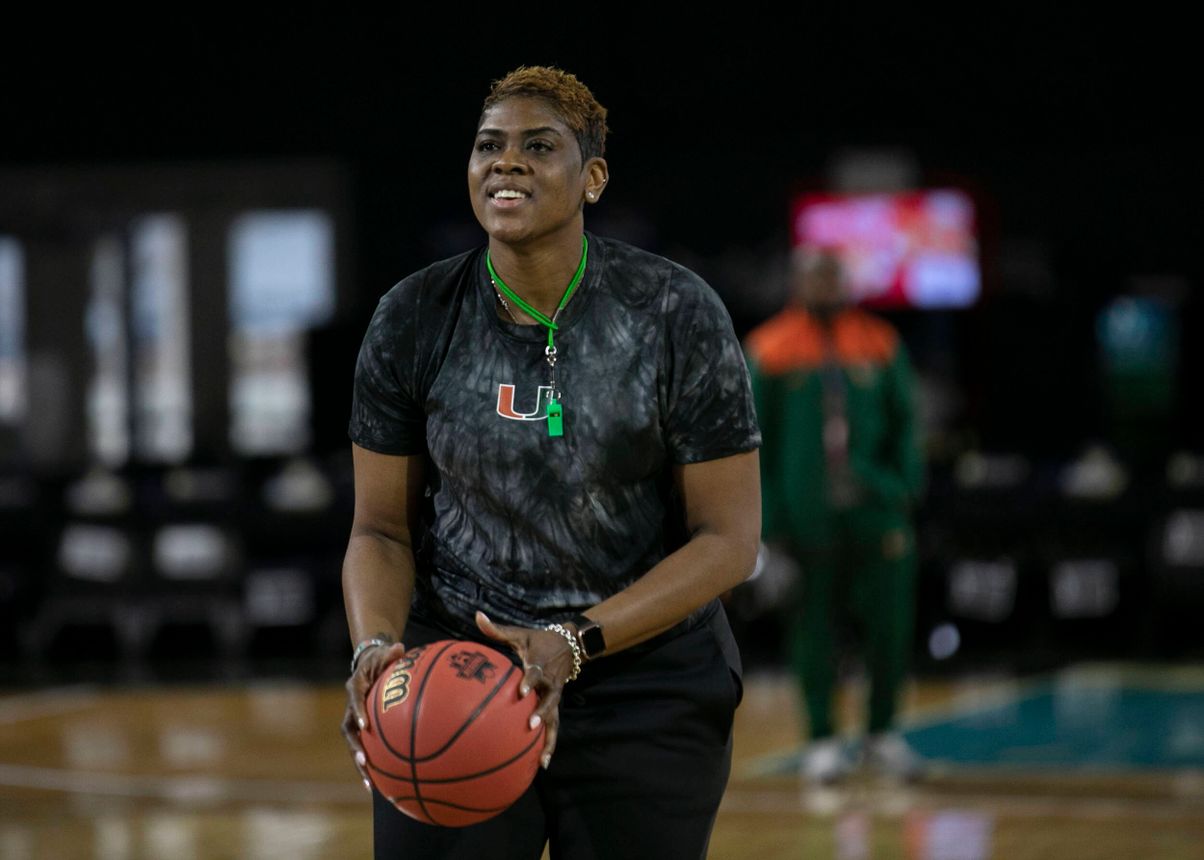 After three seasons coaching at Georgia Tech, Blue got the call that she had been waiting for.

“Coach Meier called me and said ‘Blue, I want to bring you back home,’” Blue recalls. “I tried to play it cool, but I was so excited and told her that I was ready to come back home.”

Blue brought her passion for basketball and love of The U with her back to Miami, and works hard every day to instill both in her players. Describing her coaching style as “tough love with some playful joy,” she builds relationships with her players based on mutual respect.

“I think of them all as my little sisters,” Blue said. “I take time to try and build trust with them so that, when I do come down on them, they know that it’s coming from a good place.” 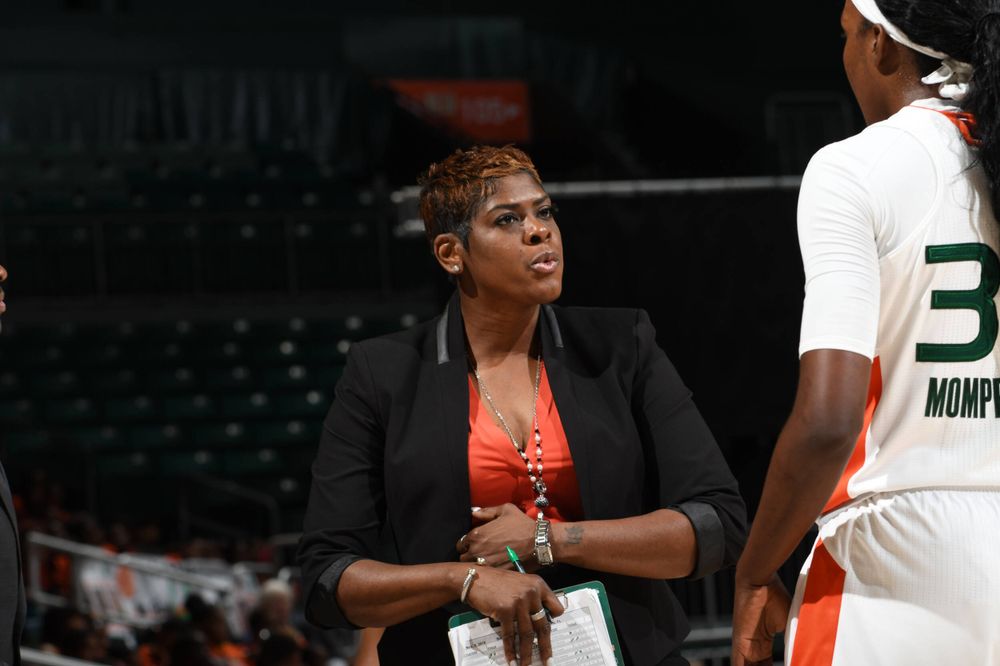 Numerous Miami gamers have come through the program since Blue joined the Canes’ coaching staff in 2012, including Jessica Thomas and Beatrice Mompremier. Under Blue’s tutelage, eight players have garnered All-ACC recognition, while Mompremier earned back-to-back All-America Honorable Mention nods and was selected in the 2020 WNBA Draft.

“I swear Blue is like my older sister,” Mompremier said. “Although I’m not at UM anymore, we still talk every other day. Over the years, Blue and I created a bond that I think will last forever.”

On the court, Blue’s main focus is the development of the Miami post players. Having played both at UM and in the WNBA, Blue knows what it takes to compete at an elite level and that is exactly what she expects from her players.

For Mompremier, having a coach who played basketball in college and at the professional level was very important, as she had someone to guide her through her last three years of college. 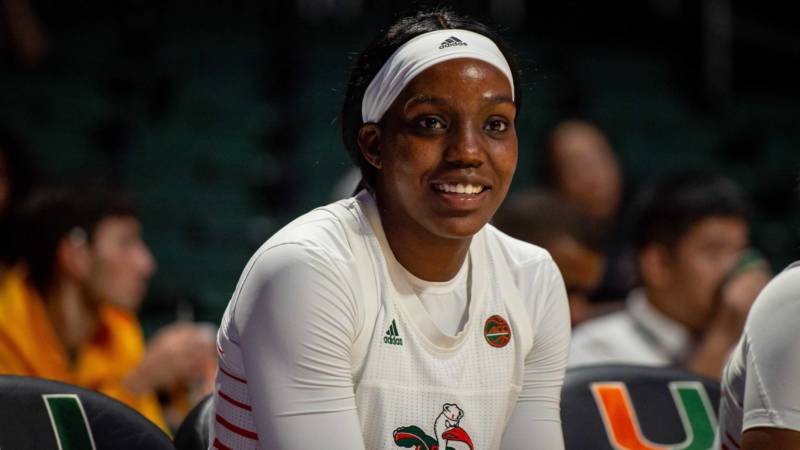 “Because she experienced the same things that I have, she was able to tell me what I needed to do and what I needed to get better at,” Mompremier said. “Having her see my potential motivated me to be a better player and person on and off the court.”

Because recruiting starts so early in basketball, Blue has known some of the players who come to Miami since they were 14 years old. One of the most rewarding parts of coaching, in her opinion, is seeing the players grow and mature into young women.

“To see them graduate and do great things, that is more fulfilling to me even than the progression of their basketball skills,” Blue said.

“At the end of the day, I want them to be the best versions of themselves and I want to help them get to whatever they aspire to.”

Heading into her ninth season as an assistant coach at UM, Blue will continue to demand excellence from her players, but will be there to support them and help them grow along the way.