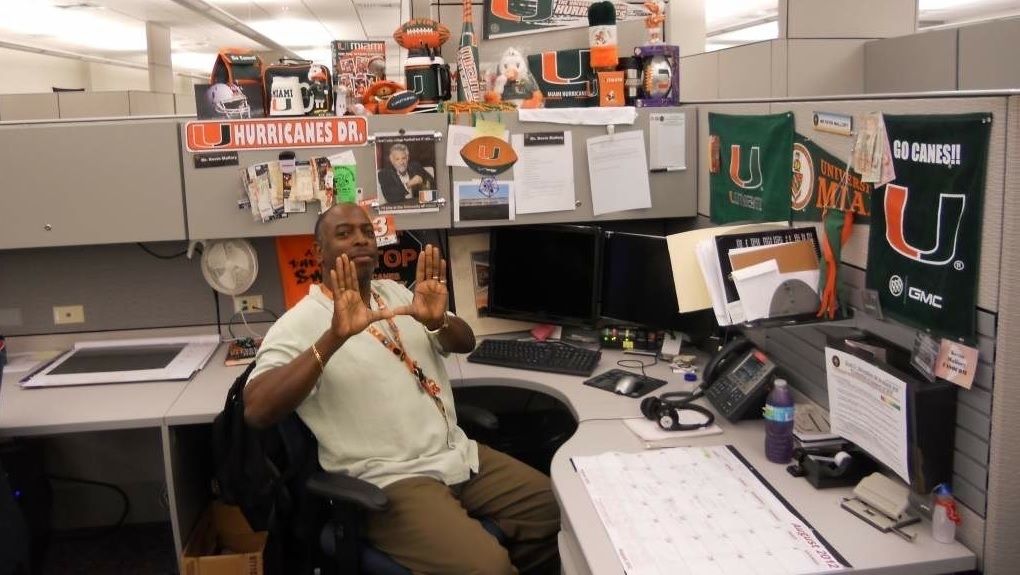 Growing up in Daytona Beach, Kevin Mallory was about nine or 10 when he made the decision.

With his brothers, Clarence and Alvin, already having claimed Florida his sisters, Karen and Harriett, having picked Florida State, Kevin was left with only one choice: The U.

And, even when he joined the Army and found his first station assignment in Germany, his support never wavered. Life in the military took him to Panama, Colombia, South Korea and across the globe.

“Unless the TV at the base, called the Armed Forces Network, showed the game on Saturday, you didn’t know what was going on,” Kevin said. “You had to hear about it or eventually read about it in the paper. You’d read the box scores on Sunday or Monday when the paper got delivered.”

After retiring from the military and moving just outside of Tampa in 1999, Kevin’s first move was to start attending Hurricanes games. A chance tailgate encounter with a fellow Hurricanes fan named Mike Brown turned into a lifelong friendship.

On Fridays, Kevin now loads up his tailgate vehicle – a tricked out van known in the Hard Rock Stadium lots as “Caneious Maximus” – and heads to Mike’s house in Broward County for the weekend.

“Everything you need to tailgate is in that van, short of the kitchen sink,” Kevin said. “TVs, fans, grills, chairs – everything you need is in there. It took us a while to get to that point, but we’re there.”

The choice was out of Connie Lackey’s hands from the beginning.

Raised in Coral Gables right near campus, Connie was a Hurricanes fan long before she became a student. She would eventually become the first-ever graduate of UM’s continuing studies program, where she earned her bachelor’s degree in 1991.

Connie spent time working for the School of Architecture, the housing department as well as student activities and student publications during her 15 years as a university employee.

“I ran the day-to-day shop of the student communications office, which was amazing,” she said.

She is now a proud member of the Iron Arrow Honor Society and vice president of Palm Beach Canes. Connie’s son William is a diehard Hurricane fan, but her daughter Amanda switched allegiances after graduating from Florida State.

Yes, she has forgiven her.

“She had to,” Connie said with a laugh. “Amanda learned how to swim at the student union pool. She used to go to summer camps at the Wellness Center when she was eight or nine. I used to take my kids with me to all the games at the Orange Bowl, which was special.”

When he was younger, Austin Norman and his family would travel to South Florida from their home in Missouri for the holidays to visit his grandfather, Richard.

He attended his first Hurricanes football game on one of those trips, watching a certain running back dominate the competition at the Orange Bowl – some guy by the name of Edgerrin James.

“I’ve never seen any player like that,” Austin said. “It was cool because it was the first football game that I was brought to that I could vividly remember. I’ve been a diehard Canes fan ever since.”

Austin moved to Palm Beach County a few years later, and now watches every away game with his good friend and fellow season ticket holder, Alain, over a tub of buffalo chicken dip – their lucky game day snack.

In 2008, Austin’s grandfather Richard – a Miami alum and a longtime donor to the school – passed away. Austin’s dad, Steven – also a rabid Hurricanes fan – died in the fall of 2019, a few weeks before Miami’s game vs. FIU at Marlins Park.

“Going back to where the Orange Bowl used to be, where I used to go to games with my dad and grandpa, it was a different feeling at a Hurricanes game,” Norman said. “Even though we lost, it was special being there. The last time I was on my grounds was with my grandpa and my dad, so that moment meant everything to me.”