The Road to the WBNA Draft

April 17, 2020. For most people, it will be a typical Friday. Maybe the end of a work week. Perhaps the last day of spring break.

For Beatrice Mompremier, it is the day that she has been working towards her whole life.

Mompremier will learn the fate of her basketball career, a future that almost certainly includes playing in the WNBA.

It has not been an easy road to reach this day in her life. Unlike some of her peers, Mompremier did not discover her love of basketball until the seventh grade.

From that moment on, basketball was one of the main focuses of her life.

I looked up to my brother and, when I got to high school, I just wanted to be as good as him.

Mompremier quickly began to gain recognition in the Miami basketball community, making a name for herself at Miami Senior High School, an institution that has produced several basketball stars, such as Steve Blake, Doug Edwards and Udonis Haslem.

A two-time Florida Gatorade Player of the Year, Mompremier helped her team to back-to-back 8A State Championships. She averaged a double-double during her career, including 25.2 points and 15.2 rebounds during her senior season.

Her performance in high school, in addition to representing the United States at the FIBA U18 Americas Championship, garnered interest from numerous universities across the country, including from the Hurricanes.

“When I was coming out of high school, Miami was one of my top five schools to visit,” Mompremier said. 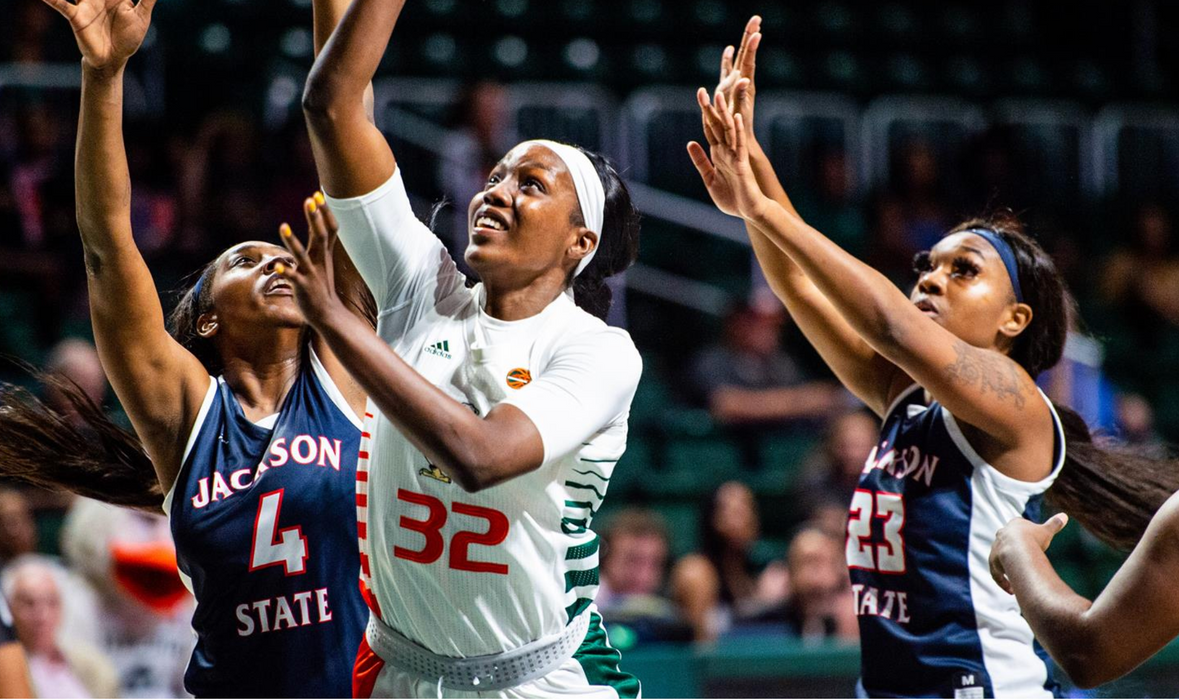 The Miami native ultimately decided to take her talents to Baylor University for her first two years of collegiate basketball. While she started more than half her games played with the Bears, averaging 7.8 points and 6.3 rebounds per game, the city of Miami was calling her home.

Following her sophomore season at Baylor, Mompremier made the move back to Miami and was welcomed by the Canes community with open arms.

“When she wanted to come back home, we said ‘Absolutely,’” head coach Katie Meier shared. “We took her in and I am so glad that we did.”

Mompremier was required to sit out during the 2017-18 season due to NCAA transfer rules, but her impact was immediately evident upon her return to the court in 2018-19.

The then-redshirt junior amassed an abundance of accolades throughout the season, culminating in All-America Honorable Mentions from both the Women’s Basketball Coaches Association and the Associated Press. Mompremier finished the season averaging a double-double with 16.7 points and 12.2 rebounds per game. Her 12.2 mark on the boards set a new single-season record for rebounding average in Miami program history.

However, the season was not without hardship. 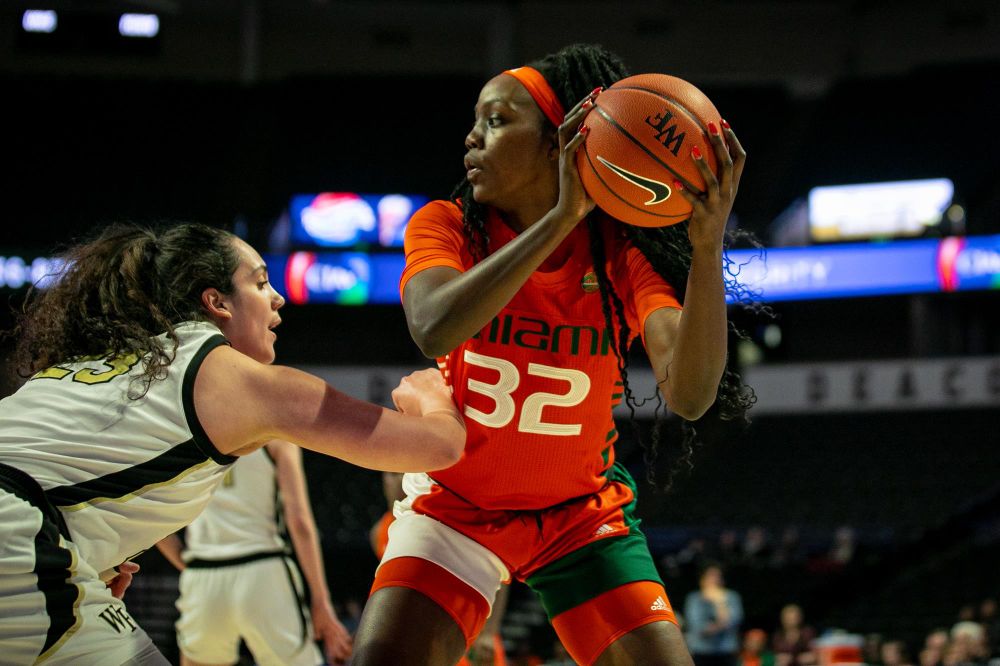 Mompremier represented the United States at the Pan American Games, helping the team to a silver medal in Lima, Peru.

Mompremier was one of 12 players to make the team and the only representative from the Atlantic Coast Conference. Throughout the course of the tournament, the forward averaged 12.2 points and 7.6 rebounds, ranking in the top 10 among all competitors. 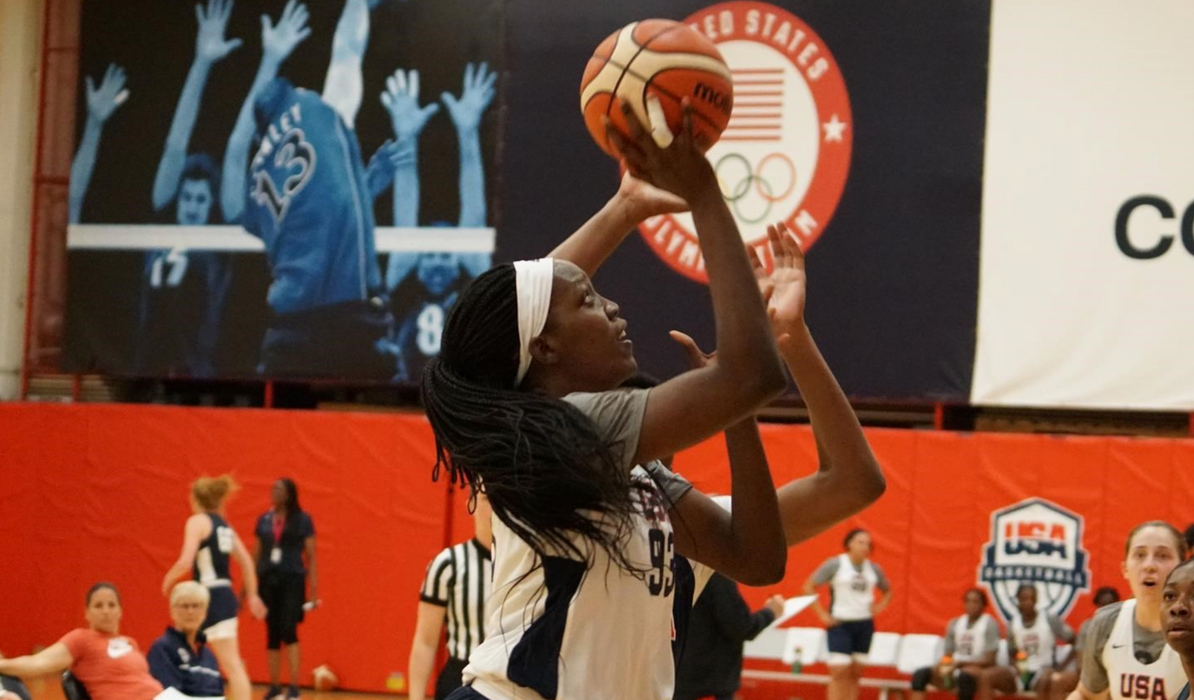 Rejoining her teammates in Miami, Mompremier and the Canes put in work during the months leading up to Miami’s season opener against Jackson State. The Canes tipped off the 2019-20 campaign with an 83-68 victory over the Tigers and Mompremier highlighted the start of her senior season with a double-double (16 points, 11 rebounds).

Miami continued non-conference action throughout the remaining months of 2019, facing the 15th toughest non-conference schedule in the nation. Mompremier played one of the best games of her career Nov. 23, recording 31 points and 18 rebounds at No. 19/20 DePaul.

Following a loss to No. 14/16 Indiana, the Canes rattled off four straight victories, including a 59-56 win in the conference opener against Wake Forest.

The Canes were rolling and Mompremier was playing some of the best basketball of her career.