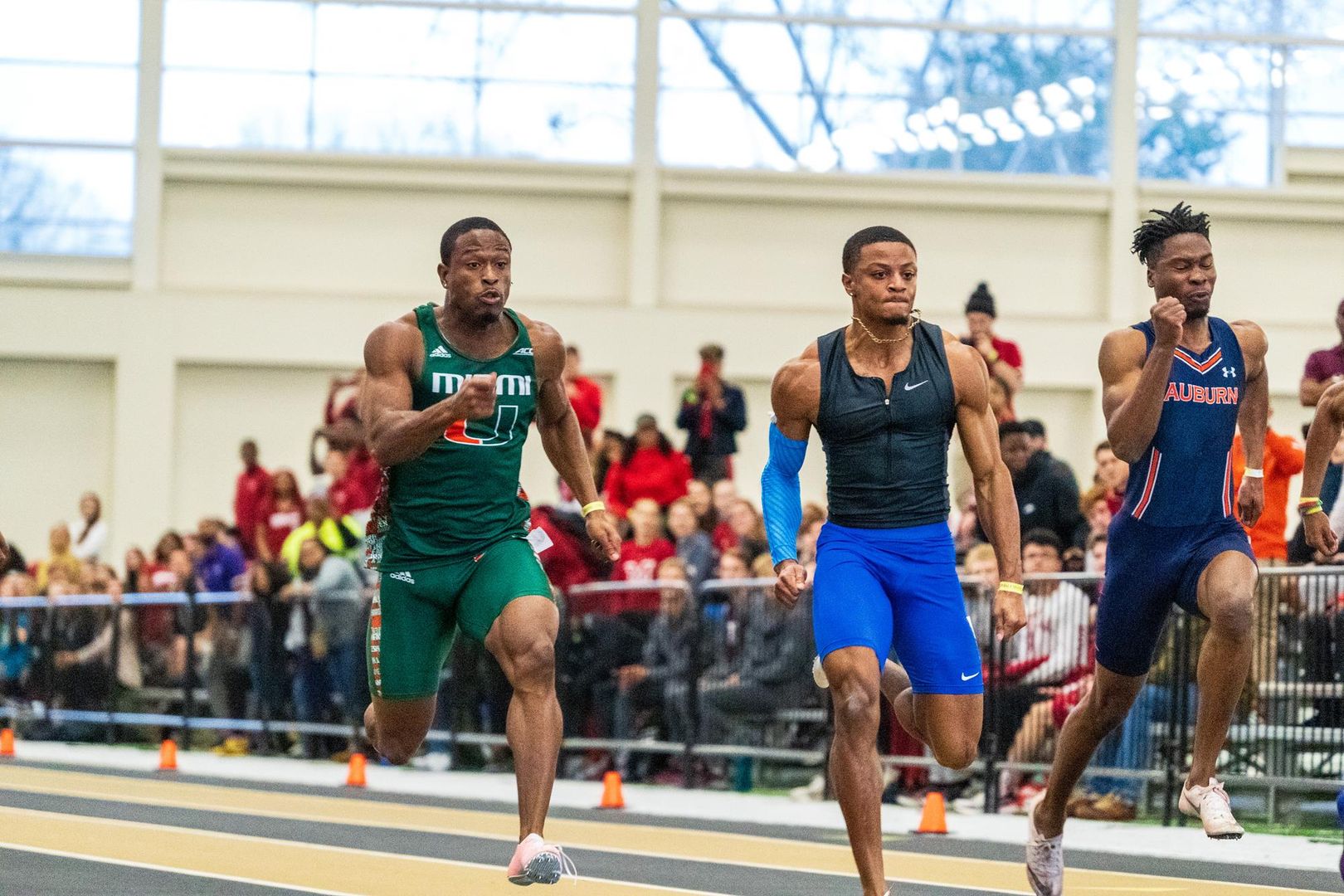 NASHVILLE, Tenn. – Senior Raheem Chambers boasted an NCAA-leading 60m time in the final on Saturday at the Vanderbilt Invitational.

Chambers’ time of 6.57 seconds currently ranks as the fastest collegiate time after three weekends of the 2020 indoor season. Saturday’s time also bested his previous Miami record of 6.62 seconds and is a new PR for the 2019 ACC Indoor 60m silver medalist.

Miami ended its second competition with numerous personal bests and event wins and Director of Track and Field Amy Deem is pleased with how her young team is performing early on.

“We always want to get better each week and I think we are as a whole,” Deem said. “There are some really good performances and we really built on last week’s performances this week. I’m really excited about where we are and where we’re going as a team. It’s great to see all of our squads record personal bests and it makes it exciting for our coaching staff to see what we’re already accomplishing.”

Junior Tiara McMinn competed in her first-ever collegiate 60m race and won the event with a time of 7.40 seconds. McMinn outdid 34 opponents and even bested her prelims time (7.48) to take the race.

The track remained hot for the Canes as senior Brittny Ellis won the women’s 400m with her time of 54.04 seconds. Ellis’s time was one second faster than Reanda Richards who came in second. Ellis has now won both 400m events she’s entered in this season. Junior Kayla Johnson ran the fastest collegiate time in the 800m with her time of 2:08.12.

“I’m really proud of our freshmen,” Deem said. “I think they’re handling the transition from high school to college really well and I think they’re going to continue to get better.”

The Canes closed down the track winning the men’s 4×400 relay with a time of 3:12.39. The group made up of Tyrees Moulton, Brown, Wintergalen and Davonte Fuller was just shy of cracking Miami’s top five list.

Miami lit up the triple jump with six personal bests marks. Freshman Justin Forde debuted for the Canes winning the event with his mark of 15.71m, which ranks as Miami’s second best mark all-time. Junior Hasani Knight finished second with his mark of 15.58m, improving his No. 3 all-time mark in the event.

“Our men’s side is really starting to show some leadership with McKinly and Hasani,” Deem said. “And it’s always good to see Raheem put up a performance like that. That gives him a really good place to continue the rest of the indoor season.”

Freshmen Russell Robinson finished sixth at 15.11m and Trey Austin finished ninth at 14.13m in the triple. On the women’s side, Darlene Charles finished seventh with her mark of 12.52m, while freshman Taylor Wright debuted at 12.45m.

Miami has two weeks until their next competition, traveling to Lubbock for the Texas Tech Invitational on Jan. 30.

“This break is huge. We’ve been hitting it hard since we’ve came back,” Deem said. “We have time to get better before our next meet and really take into account what we did these first two weeks and take it into championship season.”