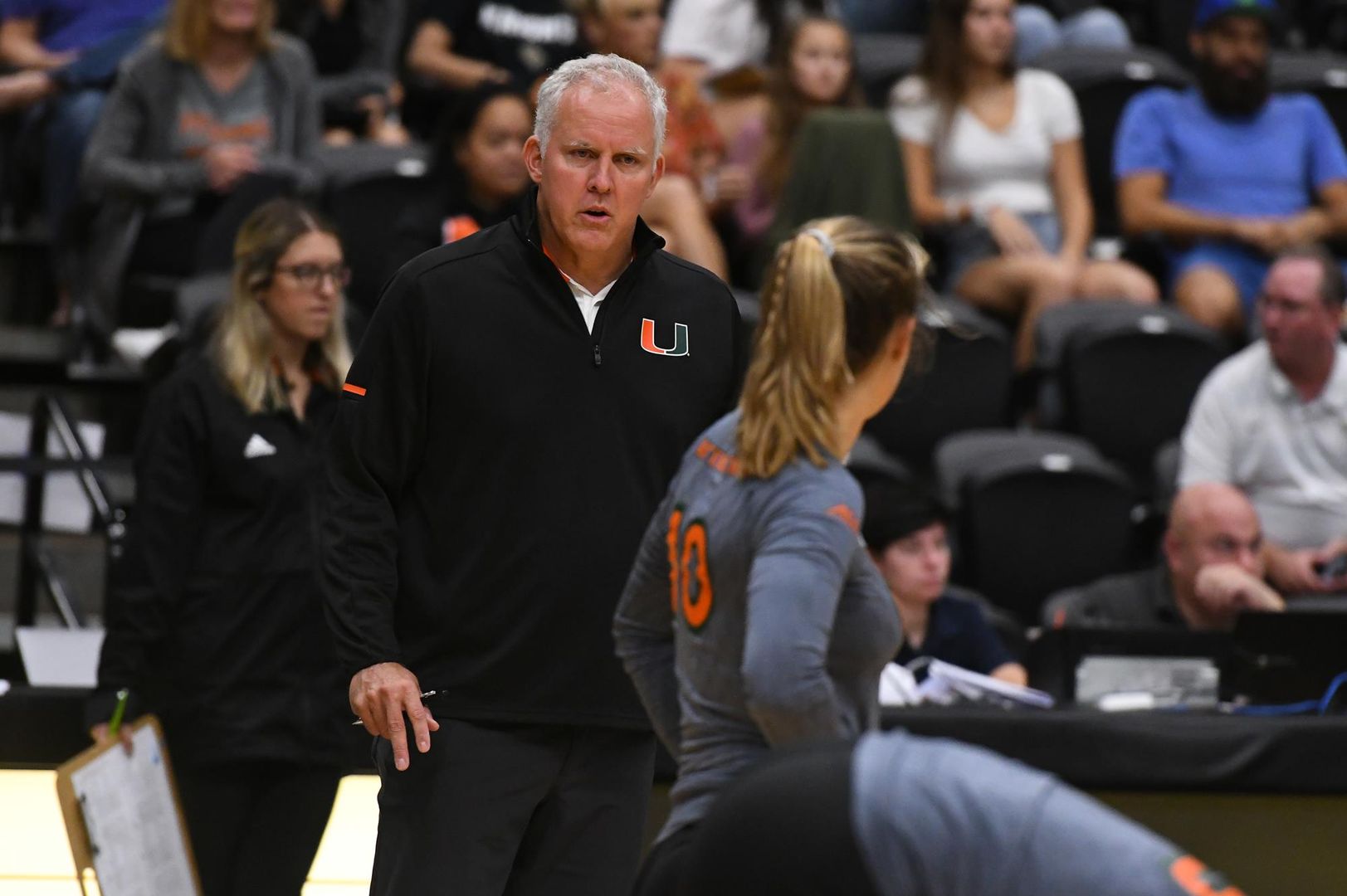 ORLANDO, Fla.– It wasn’t just another win for the Miami volleyball program on Saturday, but head coach Jose “Keno” Gandara’s 116th win in charge, tying him for the second-most wins in program history.

The Hurricanes defeated UCF 3-2 at the Sunshine State Challenge, marking its fifth consecutive win over the Knights. Not only did Gandara tie Cheryl Holt in program wins, but earned his fourth win against UCF, improving to 4-0.

“It’s an honor to be a coach at the University of Miami and to have had the opportunity to coach these athletes in enough matches to win this many matches,” Gandara said. “I don’t take wins for granted and I know we have worked hard, but the credit goes to the players. They have trusted us and have committed to our culture and that is the key to our success.”

It was offensive outing for both sides in the first set, with Miami outdoing UCF in kills, 17-13. Freshman Kennedy Prince led the Canes with five kills in the first, while both Janet Kalaniuvalu and Elizaveta Lukianova added four each with Madison Dill recording three. Freshman Janice Leao, who’s starting to be a key piece in Miami’s starting lineup registered the final kill and added one block.

Dill who led the Canes in aces last night, picked up where she left off and added the first of Miami’s eight in the first. Miami took the first set 25-22, scoring seven of the last 10 points of the set.

Again, the Canes dominated on offense, recording 14 kills off 27 attempts. Lukianova led the way with four kills, while Prince, Kalaniuvalu and Dill all boasted three each. Freshman Savannah Vach helped distribute the Canes’ offense, tallying 12 of her career-high 58 assists. For the second match in a row, Miami took the advantageous 2-0 lead with a 25-18 set win.

“I think we were more locked in today and focusing on our specific jobs in every play today,” Vach said. “It’s a great feeling.”

The third set continued to be a problem for the Canes this tournament, dropping the set 25-18. Despite staving off three set points, UCF pulled within one after an impressive defensive front as the Knights registered a total of nine team blocks.

UCF forced a five-set match after scraping out a 25-23 fourth set win. The two sides exchanged six lead changes and were tied 13 times in the set. With five Canes earning at least one kill in the set, the Knights’ defense, again, proved to be the deciding factor in the set.

For the third time this season, Miami would secure a win after five sets. With a staggering .471 attack percentage and Kalaniuvalu leading the Canes with four of her season-high 17 kills in the fifth, Miami improved to 4-3 on the season. The Canes ended the match on a six-point scoring run.

“I think Savannah [Vach] and I were able to connect a lot better today because the past few games, our rhythm was off and my timing was off so I was late or early to the sets,” Kalaniuvalu said. “It helped us out a lot to be on time today.”

For the second consecutive match, the Canes won in five sets and Prince recorded a double-double. Saturday’s double-double is the Texas native’s third career double-double. Not only was it back-to-back wins, but quality wins for the Canes heading into conference.

“There is some confidence to gain from winning,” associate head coach Kasey Crider said. “To know that you can meet the standard of winning and losing, but I hope the majority of confidence comes from beating two high-quality opponents. UCF and FAU are no joke and we passed better than we have been and we were a little more connected to the plan than we have been.”

Miami will begin conference play on Sept. 27 at Wake Forest and then travel to Duke on Sept. 29, ending its seven-match road stint.