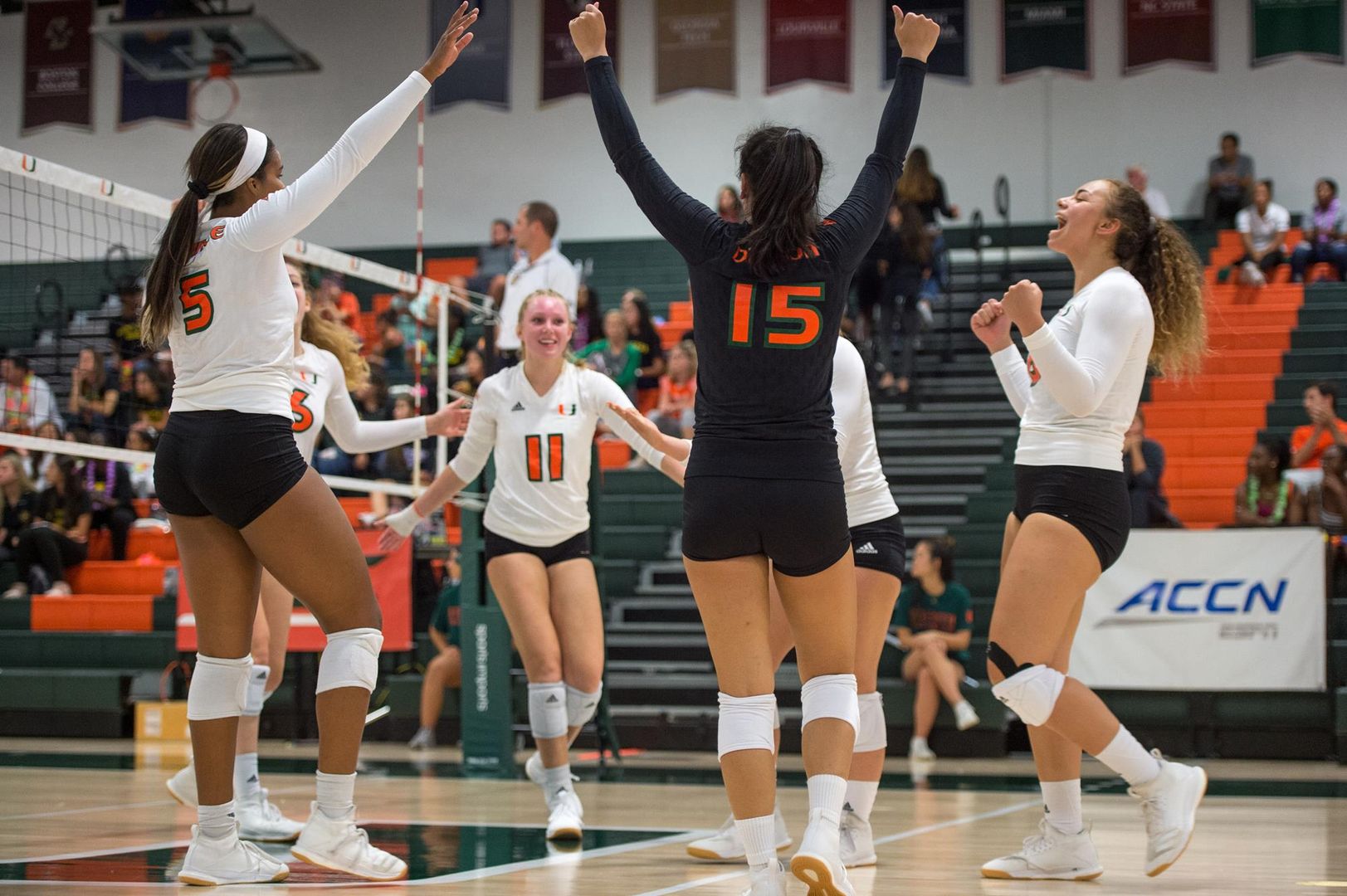 A Big Night at the Knight

CORAL GABLES, Fla. – A night where three Canes registered double-digit kills, one player tallied 52 assists and the team totaled five aces, the University of Miami women’s volleyball team picked up its first victory of the season in a special way.

Miami downed George Washington 3-2 on Friday night at the Knight Sports Complex in its first match of the Hurricane Invitational and improved to 1-1 on the season.

“It was definitely a battle with a lot of ups and downs, and with a young team you expect that, but we just have to learn how to manage our game,” head coach Jose “Keno” Gandara said. “We need to have the composure to play longer, longer and longer. I think we served good at the right times and offensively, we killed the ball enough but too many hitting errors.”

The Canes jumped out to the 1-0 lead after an explosive offensive .481 attack percentage. Lukianova recorded five kills off five attempts. Five Canes were able to record multiple kills and took advantage of the Colonials six hitting errors.

Not only was it the first win of the season, but it was also the first match for both freshman Savannah Vach and redshirt junior Madison Dill in the 2019 season. Vach boasted a staggering 52 assists, one ace and three kills in her debut with the Canes, while Dill returned to the court after missing last season with four crucial digs and one block.

It was a night of a lot of emotion for both players, but the feeling of getting back on the court and winning made it that much better.

“I was definitely nervous going into the match because it was my first, but after the first couple points the nerves were gone and I felt really comfortable,” Vach said. “The game was filled with a bunch of highs and lows and it was just about riding the highs and trying to get out of the lows the whole time.”

George Washington would tie the match at one after eight tie scores and seven lead changes. Prince and Kalanivalu both registered six kills, but the Colonials .360 attack percentage outdid the Canes.

The teams would split the next two sets to force a final fifth set. Dill proved to be an essential piece for the Canes in the fifth, coming up with two kills and a huge solo block to force match point.

“I just try to do my job during every single play and sometimes it just comes down to that,” Dill said. “Every single play, I’m just doing my job and trying to fire up the team and sometimes that’s just what it looks like from the outside. Getting those points is what was needed for the team and that’s what I try and do every time I go out there.”

George Washington staved off three match points until Vach dumped the ball right behind the net for her third and final kill of the match.

“Winning. That was the best part of today,” Vach said.

Miami plays in its final match of the Hurricane Invitational tomorrow at 5:30 p.m. against USF.