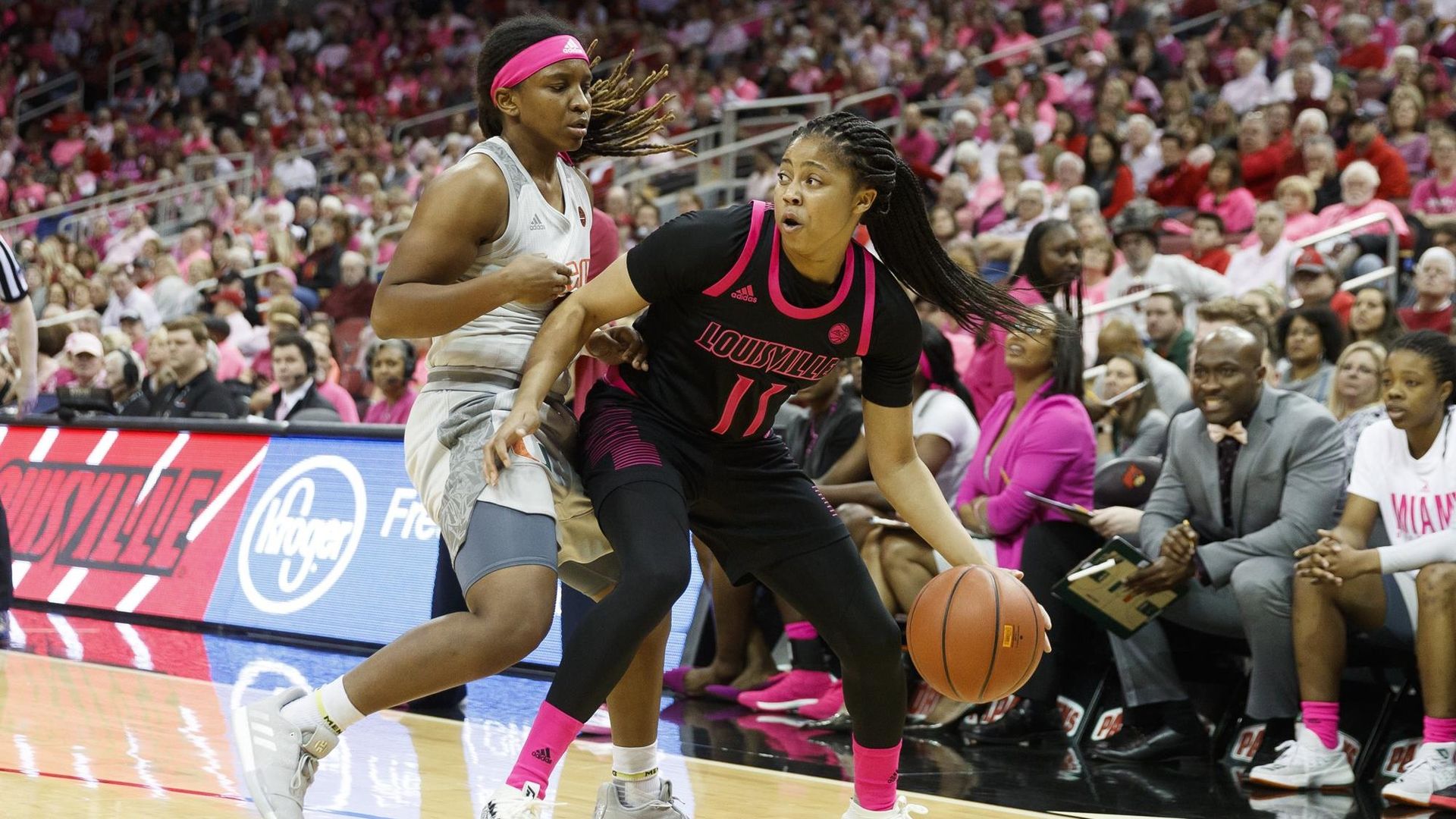 LOUISVILLE, Ky. – The University of Miami women’s basketball team stormed back from a 14-point deficit to pick up the biggest regular season win in program history Sunday afternoon in front of 12,193 fans at the KFC Yum! Center.

Behind a game-best and season-high-tying 25 points from senior forward/center Emese Hof, No. 20 Miami (22-5, 10-2 ACC) knocked off second-ranked Louisville, 79-73, on its home court to earn its first-ever top-three win and move into first place in the ACC.

“I’m sure when I’m retired and sitting on the beach somewhere, I’ll think about this as the greatest win, but these wins can be canceled out really quick if you don’t focus on the next one,” Miami head coach Katie Meier said following the 350th victory of her career. “We’re on a mission and we just have to keep getting better. We played one of our best games of the year, if not the best. It wasn’t perfect. We had to fight and overcome some stuff, so that’s what made me really happy. It’s not like everything went our way and just played great. We didn’t play well in the first half, but we hung in there.”

Miami connected on its first three 3-pointers of the day, but Louisville (23-2, 10-2 ACC) made four of its own in the opening frame. The Cardinals closed the session on a 10-1 run, including scoring the final seven points, to build a 22-13 lead.

After the Cardinals scored the first five points of the second period to extend their run, Miami countered with a 13-4 spurt to trim its deficit to five, 31-26, with 3:47 left before the break. Louisville’s edge sat at eight, 37-29, at the break.

“I didn’t feel like I had to call a timeout. Louisville does that [type of run],” Meier said of the Cardinals going up by 13. “They’re hitting four threes in the first quarter and that was a little bit abnormal. I had scenarios in my head that this could happen or that could happen and I was ready to combat it. Every time we needed a big play [we got it and] I thought our guards were really special tonight. “

The Hurricanes started the second half on a 10-2 run, including scoring the opening six points, to pull even at 39 with 4:36 left on the third-quarter clock. Back-to-back 3-pointers by Louisville junior forward Kylee Shook sandwiched around a Miami basket in the final minute of the period gave the Cardinals a 51-47 advantage entering the last session.

Louisville took a 58-53 advantage with 7:20 left and still held the lead, 68-66, with under four minutes to go. However, Hof tied the score for the third straight possession and helped Miami begin an 8-0 run that put the Hurricanes ahead, 74-68, with 35 seconds remaining.

Miami gave up just five points in the final 3:55 of the game and outscored the Cardinals, 32-22, in the last 10 minutes. It marked the second-highest single-quarter point total for Miami since the NCAA went to four sessions in 2015-16. It was also the first time Louisville has allowed 30-plus points in a frame since Notre Dame had 31 on Feb. 7, 2017 and the most it has conceded since Dayton had 33 on Nov. 29, 2015.

“Defense,” Meier said of what worked for Miami in the second half. “Emese made some adjustments. Mykea [Gray] had a huge steal on Asia Durr at a huge moment right at the end. We got stops and just went flying into the rebounds. Laura’s defense on Asia Durr [was great and] . . . it was a lot of everybody, but Laura for the main job chasing her off the screens.”

Hof logged her team-high ninth 20-point showing of the year and set career highs in ACC play in points (25), made field goals (10) and assists (five), finishing 10-of-16 from the floor. She tied her season and ACC bests with three steals, as well as pulled down a co-team-high seven rebounds and committed zero turnovers. She totaled 18 points on 7-of-10 shooting in the second half, including 12 on 4-of-5 shooting in the fourth period.

“You go up against these teams that have these great, great players—national player of the year candidates, All-American candidates—and they better start mentioning Emese Hof because on these big platforms, the kid is one of the best, if not the best on the court,” Meier said.

Redshirt junior guard Laura Cornelius tallied 16 points, a game-high six assists and four rebounds, going 4-of-6 from the floor, 2-of-2 on 3-pointers and 5-of-6 at the line. Gray, a sophomore guard, notched 10 points and five rebounds, one off her season high.

“Emese got a lot of credit, but there was a lot of pressure on the guards, making some pretty high level decisions under a lot of pressure,” Meier said. “Laura with six assists was unbelievable. She was doing exactly what I wanted and I couldn’t have her off the court.”

Durr, a reigning First Team All-American and ACC Player of the Year, paced the Cardinals with 16 points, but Miami held her to 5-of-17 shooting, including a 1-of-10 clip from 3-point range. Sophomore guard Dana Evans tallied 14 points on 5-of-13 shooting, while Shook and junior forward Bionca Dunham had 12 points each.

The Hurricanes, who overcame a double-digit deficit for the first time this season, handed Louisville its first home loss since Jan. 21, 2018, which was also the last time it fell when leading by 14-plus. The Cardinals were 33-1 over their past 34 home contests, dating back to the 2016-17 season. The six-point loss was Louisville’s largest at home since Dec. 1, 2016 against Maryland and its biggest in ACC play.

Miami, which logged the third-most points against Louisville this year, joins UConn as the lone two teams in the country with a top-four RPI road win. The Hurricanes have also now defeated half the 2018 NCAA Final Four teams, as they edged then-fourth-ranked Notre Dame, 72-65, Feb. 7 at the Watsco Center.

Louisville entered the game 14-0 this year when making at least seven 3-pointers, 23-0 when scoring 70-plus points and 23-0 when leading in the final five minutes.

With Sunday’s triumph, the Hurricanes are now 5-1 against ranked teams this season and have double-digit ACC wins for the seventh time in nine years and the fourth in a row.

Up next for Miami is its third consecutive road game, a 7 p.m. matchup with Virginia Tech Thursday night in Blacksburg, Va.

MIAMI HURRICANES POSTGAME NOTES
– The Hurricanes improved to 2-4 in their all-time series against Louisville and earned their first win over the Cardinals since they joined the ACC in 2014-15.
– In four meetings against Durr over the past four seasons, Miami has held her to 42 points (10.5 per game) on 13-of-43 shooting (30.2 percent), including a 2-of-18 (11.1 percent) mark from 3-point range.
– Thursday marked just the fourth time this season Miami has not had at least one player log a double-double, including the first in ACC play and first since Dec. 2, 2018, snapping a 17-game streak.
– Five different Hurricanes have combined for 23 20-point outings across 21 of the team’s 27 games so far.
– Cornelius and Gray both surpassed 700 points as a Hurricane, while redshirt junior forward Beatrice Mompremier eclipsed 1,750 minutes played in her career.