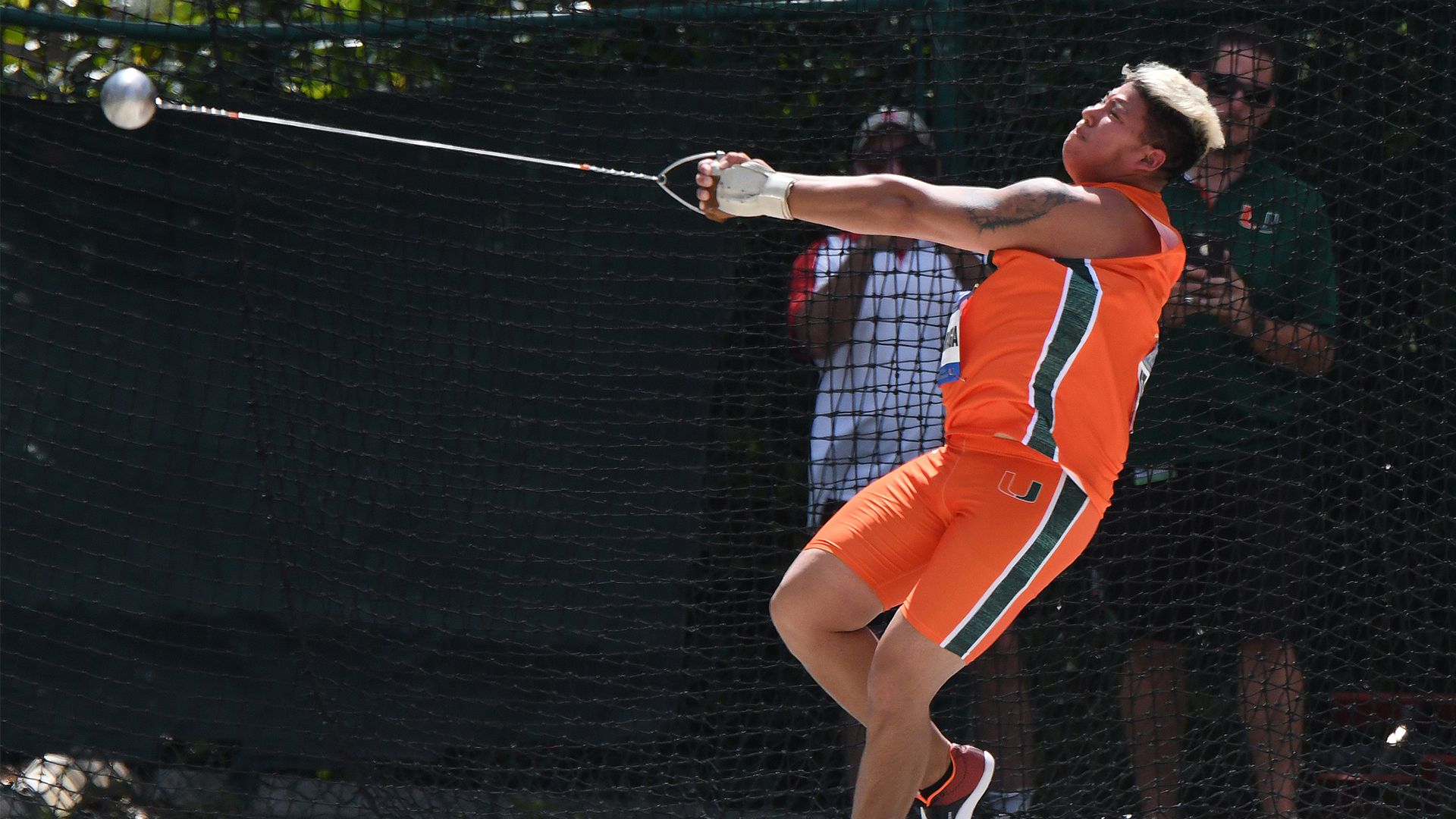 TAMPA, Fla. – Kevin Arreaga was the first Cane in action on Thursday, competing in the men’s hammer throw, and he wasted little time punching his ticket to nationals.

The freshman was one of 11 members of the University of Miami track and field program that competed on Day 1 of the NCAA East Preliminary and he set the tone for a strong showing by the Hurricanes at USF Track & Field Stadium.

Arreaga opened up with a throw of 66.16m and followed that effort with a mark of 68.53m. The Spain native’s final throw was marked at 67.27m, but it would not matter, as Arreaga finished eighth overall to claim one of the 12 qualifying spots from the East Preliminary.

While Arreaga earned a spot in the NCAA Outdoor Championships, six Hurricanes moved one step closer to joining him after excellent performances on the track.

McKinly Brown finished third in Heat 1 of the men’s 400m hurdles first round with a time of 51.37 seconds, earning an automatic qualifying spot in the quarterfinals. The sophomore’s time was 15thamong 24 qualifiers for the quarterfinals.

Alfreda Steele was fourth in Heat 6 and 14thoverall in the women’s 100m first round with a personal- best time of 11.29 seconds that is third-fastest in UM history and earned the freshman a spot in the quarterfinals. Kristina Knott ran a season-best time of 11.50 seconds to finish sixth in Heat 6, but did not advance.

Symone Mason was third in Heat 2 of the women’s 400m first round with a time of 52.77 seconds, earning an automatic qualifying spot in tomorrow’s quarterfinals with the 16th-fastest time in the first round.

Debbie Ajagbe was the final woman to compete for the Canes on Thursday, finishing 23rdoverall in the women’s shot put. The freshman posted her second-best mark of the season, 15.74m, but did not advance to the NCAA Championships.

Sean Grossman closed out his Hurricane career with a 31st-place finish in the men’s 10,000m, posting a time of 30:45.96. The senior is the first Hurricane distance runner to qualify for a NCAA East Preliminary and was the first Cane to score in a distance event at the ACC Championships.

The preliminary competitions are scheduled for May 24-26. The University of South Florida in Tampa, Fla., will host the East Preliminary and California State University, Sacramento in Sacramento, Calif., will host the West Preliminary. The qualifiers out of these two regions will compete in the NCAA Division I Men’s and Women’s Outdoor Track and Field Championships held June 6-9 in Eugene, Oregon.

NCAA track and field fans can watch a live stream of the NCAA Division I East and/or West Preliminary Championships as FloTrack Pro subscribers. The subscription will include access to all FloTrack live broadcasts, video on-demand from all events, documentaries, technique videos and more. Coverage of the preliminary competitions will be available May 24-26 at www.FloTrack.com.

Fans can also follow all the action at the NCAA East Preliminary via live results by clicking HERE.