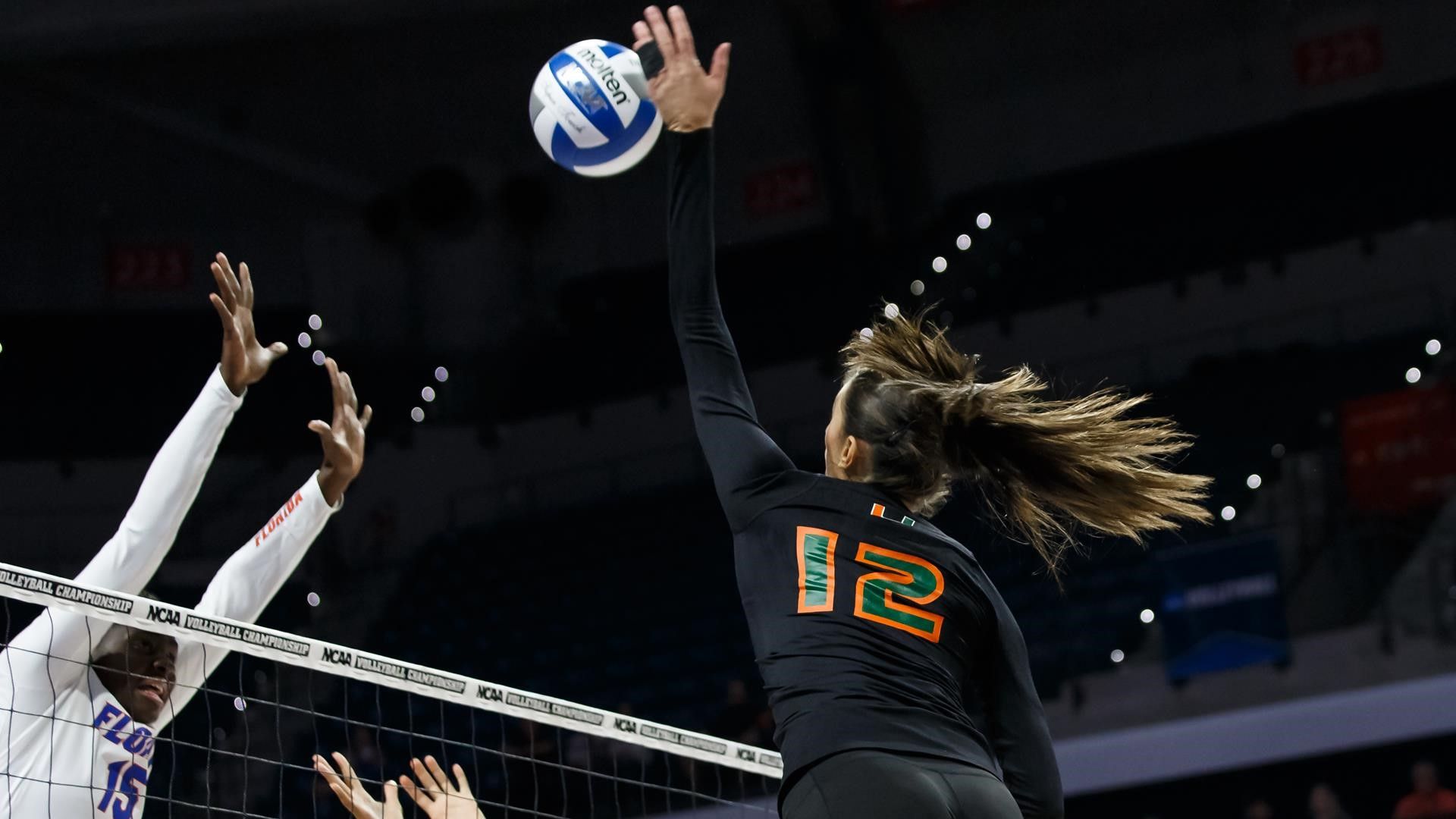 GAINESVILLE, Fla. – The University of Miami volleyball team pushed No. 3 University Florida to the limit, but fell 3-1 at the Gators’ Exactech Arena in the first Second Round matchup of the 2017 Division I Women’s Volleyball Championship.

The Hurricanes (22-6) rebounded in the best way possible from a tough first-set loss to go into the intermission on level terms, and were then just a point away from forcing extra points in the fourth set, before the second-seeded Gators (27-1) closed out the match at 25-14, 19-25, 25-11, 25-23. The defeat ended Miami’s second streak of seven or more victories this season as the Hurricanes close out the campaign with a win percentage of .786, the program’s highest since 2012.

“It is always tough to end the year on a loss, but this group has been unbelievable,” Miami head coach Jose “Keno” Gandara said. “I am so proud of them, not just for tonight. The last three weeks of this season were the best for us as a team. These kids just always want to improve and learn with weeks and days left in the season.

“Congratulations to Florida. They are a great team with great fight. I would also like to thank the University of Florida for a great event. The staff was great from the moment we set a foot on campus and it says a lot about the institution and the program here.”

Senior outside hitter Olga Strantzali and senior libero Sylvia Hernandez capped off their Miami careers with team-high 20 kills and 15 digs, respectively. Strantzali picked up her 13th double-double of the season with 10 kills on the defensive end. The 2017 ACC Player of the Year scored in double digits in each of Miami’s 28 matches in 2017. Redshirt junior setter Haley Templeton had 41 assists, six digs and a service ace. Sophomore service specialist Hannah Sorensen led the way for Miami with three of the Canes’ five aces.

“I feel like I made the right decision transferring to Miami after my freshman year,” Strantzali said after her farewell match. “I am so proud that I got to play with such great teammates and for such a great staff. The team and I were just best friends on and off the court.”

“It has been a dream come true playing for Miami, with some of the best coaches and players in the country,” said Miami native Hernandez, who finished the season with team-best 437 digs. “It has been such an honor to compete with them, for them, and for the people of Miami and for my family. It’s been an honor.”

Shainah Joseph (19 kills, .515 hitting) and Carli Snyder (13 kills) finished in double digits offensively for the Gators, who hit a .366 as a team. Paige Hammons and Caroline Knop were Florida’s defending leaders with 18 and 11 digs, respectively.

Despite impressive play from its middle blockers, Miami dropped the first set, 25-14. The Hurricanes hung in with the Gators at the start of the match and took a lead at 3-2 through a block by sophomore middle blocke Madison Dill and redshirt freshman outside hitter Elizaveta Lukianova, but could not slow down Florida’s attacking efficiency. Junior middle blocker Lucia Pampana had five kills on five swings in the frame, while Dill contributed three as the two combined for eight of the team’s 11 kills.

The Canes were in control of the second set from the very start and did not let the hostile environment affect their momentum. Florida called its final timeout in the frame at 22-18, but Miami did not allow a late run, winning three of the last four points to tie the match. The Canes accumulated 19 kills while hitting .485 as a team and scored a sideout a percentage of .737 in the process. Strantzali went into the locker room in double digits with 11 kills on a .500 hitting, helping Miami outkill the Gators 30-22 through two sets.

“We improved a lot over the last three weeks and we were going to practice every day just wanting to get better,” the Greece native said. “We are a completely different team than we were at the beginning of the season and I am just so proud of this team.”

Florida orchestrated two four-point runs in the early in the third set. Miami responded to the first one and tied the score at 8-8 with a kill by Templeton, but was forced to take a timeout at 12-8. Florida continued being better on both sides of the ball and allowed only three Miami points before closing the set. The Gators had double Miami’s seven kills – four of them courtesy of Strantzali – in the frame and hit .414 as a team.

Miami’s first three-point run in the fourth set gave the Canes a four-point lead shortly after the media timeout, 16-12, but the Gators responded with a 9-3 run to force Gandara’s final timeout of the set. The Canes came out of the timeout ready to fight and got within one at 24-23 on Strantzali’s final kill, but Joseph had one more kill in her to close the match and advance Florida to the next round of the competition.

“This team has a long and amazing road ahead of them,” Hernandez said. “It has been great watching them grow from the start. They come out and play with heart. It does not feel like I am playing with freshmen. To see them improve every day, I cannot even imagine what the future holds for this team.”