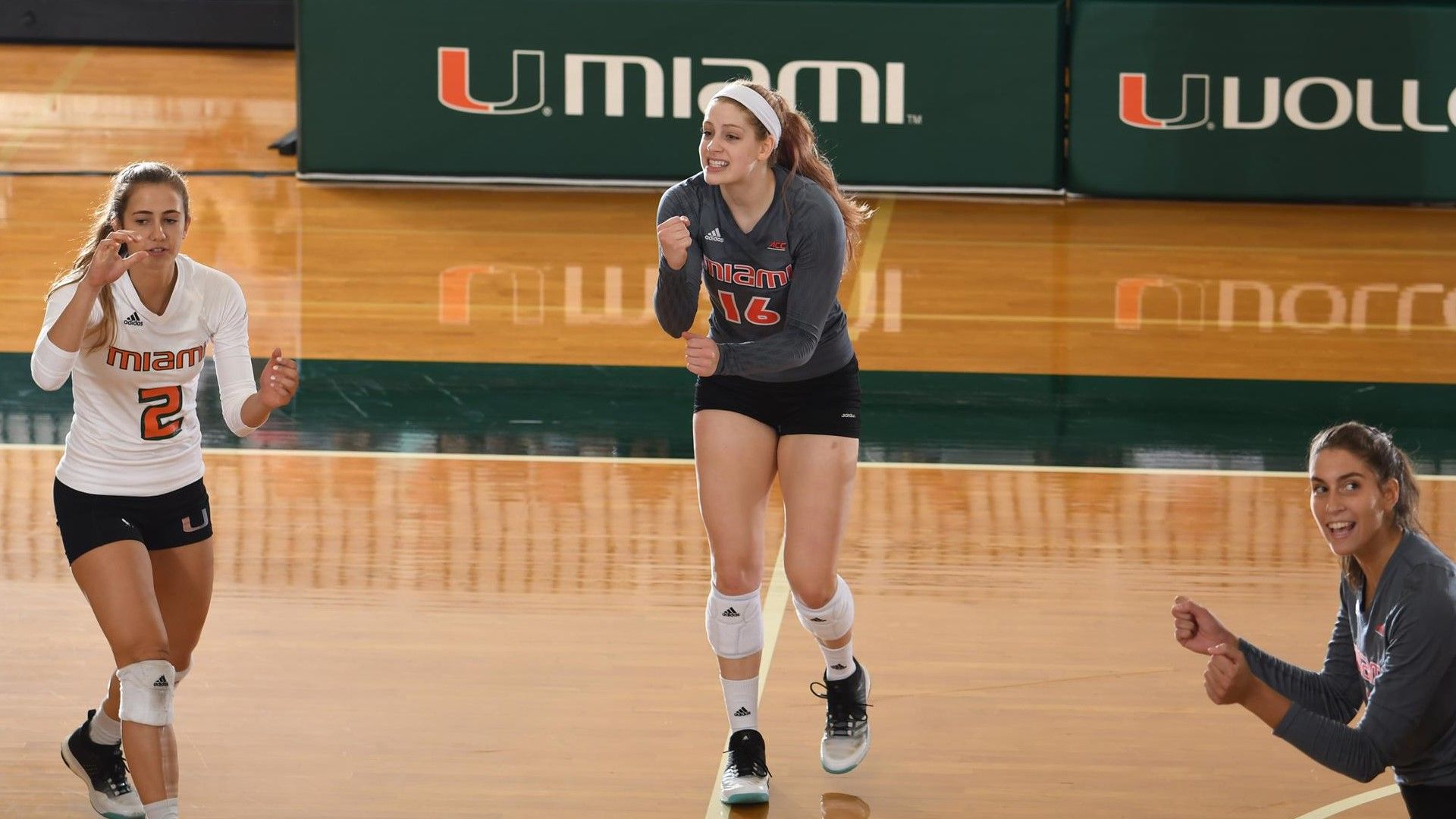 CORAL GABLES, Fla. – The University of Miami volleyball team proved its resilience yet again Thursday night by coming from behind to defeat Boston College in a five-set thriller at the James L. Knight Sports Complex.

“We played good enough to win, which not our standard, but it is one of the things that we are trying to do,” Miami head coach Jose “Keno” Gandara said. “On that side, we just have to understand that it’s not the way how we want to [win], but sometimes we just have to be good enough.”

Running out of options going into the fourth set, Gandara called on freshman Dobbs, who had played in only 13 of the team’s 53 ACC sets this season. The freshman took her chance and finished the match with 11 kills, as much as junior outside hitter Kolby Bird, who played the entire match. Dobbs achieved the feat on a .474 hitting, best for the Canes on the night.

“Cam came in in a tough situation and didn’t have the best start, but her maturity as a freshman and composure really came through,” Gandara said. “Eleven kills on 19 [attempts] is a good night for everybody.”
“It was an ugly win,” Dobbs said. “Credit to Boston College. They really challenged us for sure and I see some wins in their future. They really rallied every point and kept the match exciting. All they did well helped us realize what we need to work on.”

Leading by only one at 19-18, Miami won six out of the last seven points in the first set to prevail 25-19. Overall, the Hurricanes ended the set on a 13-5 run to fight off the Eagles, who led by two points at 14-12. Five Canes had at least a pair of kills at the end of set one, led by Strantzali and Bird with three apiece.

After trailing by six early in the second set, the Eagles got back in it relatively quickly and used a match-best 8-0 run to come out of the frame victorious, 25-22. BC’s largest lead was five at 21-16 and even though a kill by Bird brought Miami within two at 23-21, the Eagles’ sideout percentage of 65 allowed them to close the set. Going into the intermission, the Hurricanes had three more kills than their opponent – 27-24 – but their hitting percentage of .159 was slightly bested by BC’s .171.

The Eagles had control of the entire third set and won it convincingly 25-17. A service error by McKenna Goss for 2-2 made for the only tied score in the frame before BC led by as many as nine, lastly at 22-13. Back-to-back blocks from sophomore middle blocker Madison Dill – assists from Templeton and senior outside hitter Brooke McDermott, respectively – gave Miami some momentum late on, but it was too little too late.

The fourth set had many twists and turns, but the Hurricanes managed to force a fifth set by the minimum margin possible, 25-23. The teams entered the final stage of the frame tied at 20 all, after which crucial sideout kills from Miami’s freshmen – Dobbs and outside hitter Elizaveta Lukianova – kept the Hurricanes in the match.

“After the second set we kept reminding each other that we have to improve in order to win this match, and we had to win it,” said Lukianova, who had eight kills, two blocks and a dig for the win. “Our opponent played a great match, but we knew that we should win this match as long as we keep having fun and do our jobs.”

The best of Dobbs came in the fifth set, in which she had seven kills, six of them after the teams changed sides with a minimum BC advantage. A block by Templeton and junior middle blocker Lucia Pampana gave Miami its first match point at 14-9, and although the Eagles would not go down easily, three points later Dobbs topped off a night to remember with her final kill for 15-10.

“Throughout the entire time during which I was on the court, I was playing for my teammates, playing for the seniors. This was their last night match ever in this gym as a Miami Hurricane, so I was just doing everything I could to let them win this match,” Dobbs said.

On Sunday, Miami will play its last home match of the season, welcoming Syracuse for Senior Day. Prior to first serve, a ceremony will be held in the Knight Sports Complex to honor seniors Strantzali, McDermott, Alyssa Basdavanos, Sylvia Hernandez and Sakile Simmons for their contribution to the program.