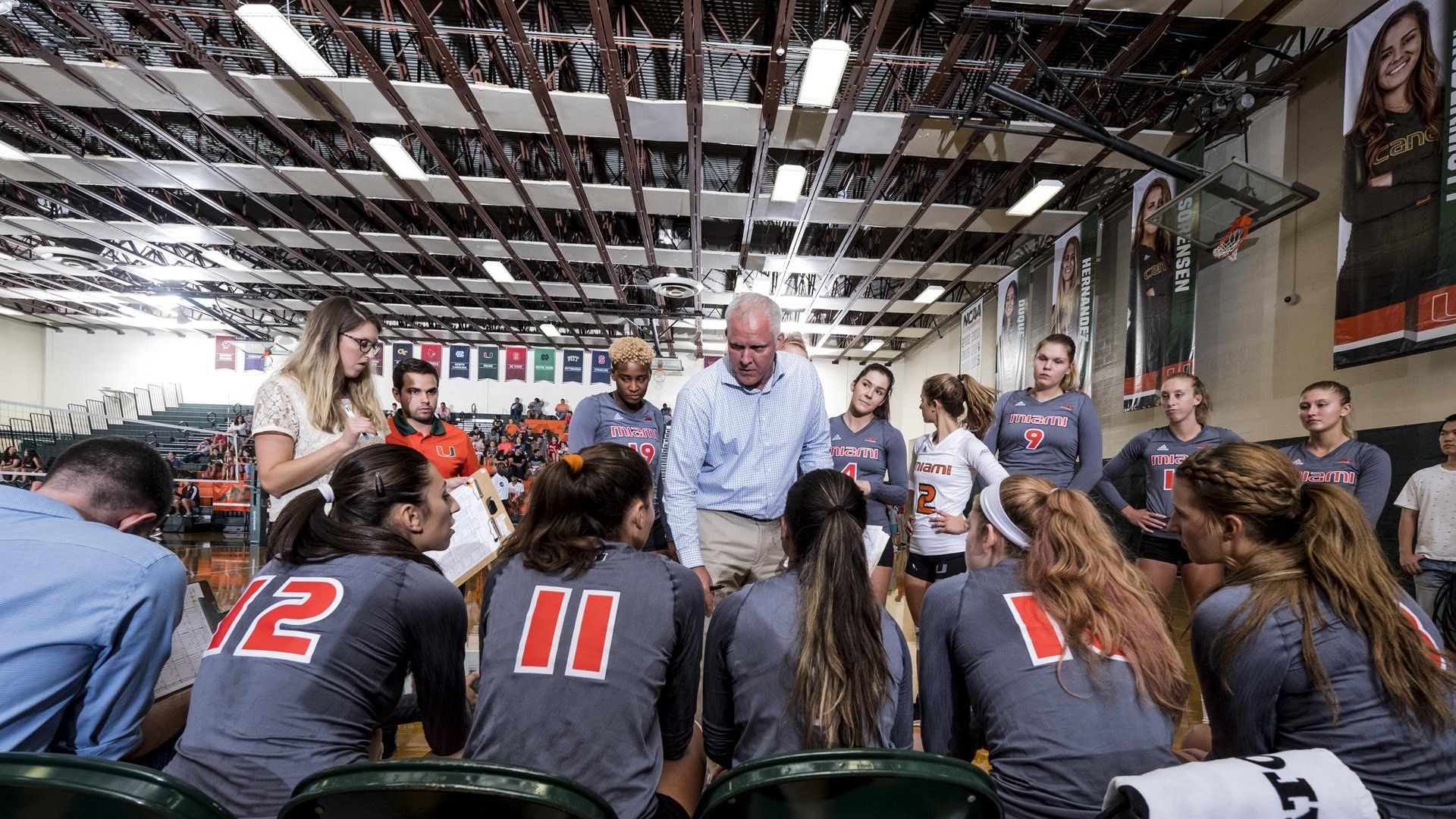 Volleyball Prevails Over Virginia in a Wild ACC Encounter

“It was a good match for us, I thought we played pretty well in game five, which is a good end to a long week,” Miami head coach Jose “Keno” Gandara said after the win. “UVA is a good win. They were switching lineups and are very dangerous.”

In addition to running the attack with a match-high 43 assists, Templeton exploded for a season-best .538 hitting and contributed nine digs on the defensive end. McDermott, on the other hand, was one of the two Hurricanes with multiple service aces, recording a career-best three points from the service line.

“We lost some of our non-conference schedule to Irma, but the last few days we spent back in our gym, just training and working as hard as we could on the things we are fighting personally and as a team in order to get ready for the ACC,” Dobbs, a freshman outside hitter, said. “Now that we are here, we are unbeaten, and that’s awesome. We are going to enjoy this win for a few more hours, use the day off tomorrow to relax, and Tuesday we are back on. [In ACC] The games are crazy, it is high speed and high level. Every team is different, so from scouting reports to seeing how things develop in the game, this level [of volleyball] requires a high level of intelligence, both as a team and individually. Our coaches have done a great job to prepare us, either when watching film or even in practice, when they are walking around the court with their iPads. It’s really cool to experience.”

Strantzali completed her double-double with team-high 10 digs, tying senior libero Sylvia Hernandez for the feat. Dobbs commemorated her first ACC appearance with a career- and match-best four aces. Miami’s redshirt freshman outside hitter Elizaveta Lukianova also got her first taste of conference action, recording three kills, a solo block and a career-best performance with one assist.

For a second match in a row, the Hurricanes outblocked their opponents, picking up nine blocks against the Cavaliers. Miami kept UVA on its toes from the service line, accumulating 10 aces.

“In the beginning of the year, we weren’t as good at blocking as we want to be,” Templeton said. “For two weeks of practice, we would spend half of the time focusing on blocking. We want to be one of the top blocking teams in the ACC. We are not there yet but we improve with each match.”

Miami put together an early three-point run in the first set, but Virginia quickly tied the score at 4-4. Not long after, the Cavaliers orchestrated a set-best 7-0 run to grab the momentum, forcing a Canes into a timeout in the process. The set continued proceeding in a trendy fashion with Miami immediately getting within one with a block by Templeton and Simmons for 13-12. Later, senior outside hitter Brooke McDermott picked up a tip kill to cut Virginia’s lead to 16-15, but UVA went on a 5-1 run that gave them a  the comfort to take set one, 25-20.

The second set started with arguably the best rally of the match, which set the tone for the closely fought battle that followed. The set opened up a little more after the media timeout, when a kill by Novakovic gave UVA the largest lead of the stanza at 18-15. Miami responded by back-to-back blocks against Banker – courtesy of Simmons, Strantzali and freshman outside hitter Cameron Dobbs – before tying it at 20 all with an ace by Dobbs. Late in the set, sophomore setter Hannah Sorensen’s serve proved invaluable for the Hurricanes yet again – she contributed two aces and created enough discomfort for the Cavaliers to allow Miami to close out the set at 25-21.

Sorensen’s opening serving sequence gave the Canes a 3-0 start in the third set and the post-break momentum. Miami’s lead grew to six at 13-7 amidst several Virginia errors, but the Cavaliers matched the string of five Hurricane points to make it a one-point set at 14-13. Later, kills from Dobbs and Simmons, respectively, gave the Canes a four-point cushion and forced a Virginia timeout at 20-16. Miami continued to press after play resumed and conceded only one point before Templeton wrapped up the set with her sixth kill of the match, 25-17.

Miami got off to a better start in the fourth set, but Virginia showed composure and resilience, canceling five two-point deficits before going on a 6-0 run to earn the largest lead of the set, 20-16. The Hurricanes struck back with a kill by Templeton and a Simmons-Dobbs block before redshirt freshman Elizaveta Lukianova grabbed her first ACC kill to force a UVA timeout, 20-19. The Cavaliers won four out of the following five points to earn a quadruple set point, but soon it was a one-point contest once again after Templeton and Simmons stuffed Novakovic for 24-23. The Cavaliers’ leader made up for it on the following play, sending the match into a fifth set with her 15th kill.

The first serious run in the fifth set was in the Canes’ favor and featured kills from Strantzali, Dobbs and Lukianova, 6-3. The switch came at 8-4 Miami and Virginia never came within three before Dobbs put the match to bed with a thunderous kill for 15-11.

“We are going to enjoy this and we will think about what we have to work on on Tuesday,” Gandara said. “We will continue to work on the things we have been working on. This group has done a good job at learning how to address their flaws and I like that about them.”

Miami returns to the road next weekend next weekend for ACC contests at Notre Dame Friday and Louisville Sunday. First serves are scheduled for 7 p.m., and 1 p.m., respectively.