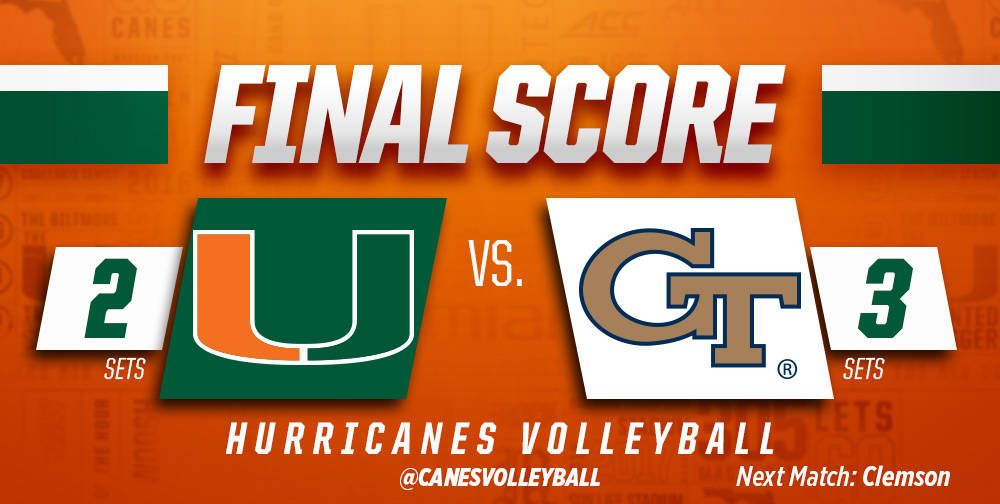 The Yellow Jackets took the third set, 25-17, and put the pressure on the Hurricanes with a 2-1 lead in the match. But Miami responded, winning the fourth set, 25-20, and forcing a decisive fifth set and that is where things got really interesting.

The Hurricanes and Yellow Jackets battled tight in the final set, with neither team getting more than a two-point lead until the Canes went up, 9-6. Miami would reach game point at 14-11, but Georgia Tech took three straight points to even the match at 14.

The two teams traded points until Georgia Tech took two straight and took a 18-17 lead, but Miami would respond and tie the match at 18 and 19. The Yellow Jackets outlasted the Hurricanes and won the final set, 21-19, and secured their 24th win of the year.

“I was excited to be in a match like that,” Miami head coach Jose “Keno” Gandara said. “I think the first three sets were very different from game 4 and 5. It’s good to be in matches that close. We know the margin is thin and they played better in key points. I’m proud of the girls and the way they competed. We made a lot of good plays and some not so great plays, but it was a good match.”

Three Hurricanes finished with double-digit kills against Georgia Tech, led by Olga Strantzali’s 19. The junior added 16 digs, a block and an assist to register her team-best 13th double-double of the season.

Anna Haak also recorded her ninth double-double of the year, closing the match with 17 kills, a career-best 21 digs, a career-high three service aces and four assists.

Madison Dill was the third Hurricane to notch double-digit kills, finishing the night with a career-high 15 and a career-best .464 attack percentage. The freshman middle blocker added two blocks and two digs against Georgia Tech.

Lucia Pampana and Kolby Bird each had six kills. Pampana added two digs, while Bird had a career-best two solo blocks, two digs, a service ace and an assist.

Sylvia Hernandez led all Hurricanes with 23 digs and added a career-high nine assists and a service ace. Sara Duque had 10 digs and Codi Lee saw action in reserve for Miami.

“I think we are showing some resiliency,” Gandara said. “I think we play matches well, but not necessarily when the opponents are playing well. It was one of our first matches where we played well in a close match and not just an open match. In moments there is a lot of good stuff. Hannah and Madi and Sylvia played well and I liked how Anna and Olga responded after Game 3.”

The Hurricanes welcome Clemson for the season finale at noon on Friday in a match that will air live on ACC Network Extra.