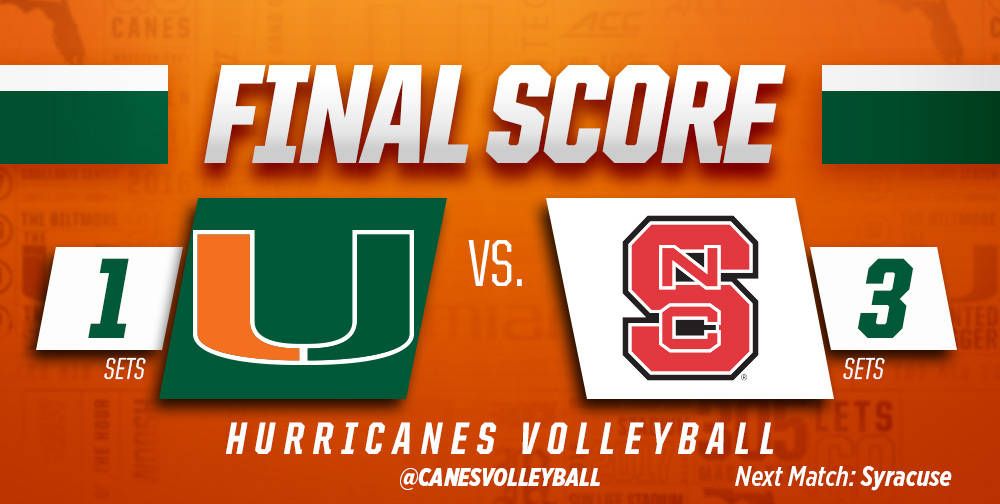 The Hurricanes (11-15, 5-9 ACC) dropped Sunday’s match to the Wolfpack (16-10, 9-5 ACC) in four sets, despite getting a strong offensive performance as a team. Miami hit .340 for the match, but the Wolfpack attack was also efficient, registering a .392 hitting percentage.

“I have to give [NC State] credit,” Miami head coach Jose “Keno” Gandara said. “They served a lot tougher than we did and they passed better. That’s always the challenge—to serve and pass better—and they won that. They do a good job. They play fast. We don’t see that very often, so they put some stress on our block. Offensively, we were as good as we’ve been and so were they. Now we have to learn to beat a team when they’re playing well also.”

The Canes took the opening set, 25-20, thanks to strong performances by Strantzali and Anna Haak. Strantzali added five kills and hit .333 for the set while also recording her 1,000th collegiate kill on her first attack of the afternoon. Haak was also a dangerous attacker, tallying five kills on a .833 hitting percentage.

NC State came out of the break on a hot streak, opening the third set on a 7-1 run. Miami would slowly chip away at the Wolfpack lead, cutting it to four, 9-5. However, the Wolfpack built its lead to eight, 15-7, and never looked back. NC State won the third set, 25-15, and took a two sets to one lead in the match.

The fourth set began with another fast start by NC State, as the Wolfpack took a 6-1 lead before Miami called timeout to regroup. But the Wolfpack would continue its strong play, building a 13-4 lead and forcing the Hurricanes to take their second timeout. NC State would lead by as many as 11, taking a 20-9 lead, but the Hurricanes made a push to force an NC State timeout with the Wolfpack leading 23-16. The Canes’ late run would come up short, as NC State took the final set, 25-17.

Haak led the way for Miami’s attackers, tying a career high with 19 kills on a .351 hitting percentage. The sophomore added four digs, an assist and a service ace against NC State.

“Anna had one of her best matches, in a losing cause, but she showed composure at the end of the match,” Gandara said. “She played well. She hit well. She learned throughout the match. She’s just poised to have a good ending to the season.”

Strantzali also turned in a strong performance, finishing with 17 kills on a .317 attack percentage and adding a team-high seven digs, two service aces and an assist.

“I’m happy about [reaching 1,000 kills],” Strantzali said. “It makes me want to work harder. I’m excited for the next game now. I want to have more kills. I want to help the team even more. I just feel bad because we lost and we were right there.”

Kolby Bird had five kills and hit .333, while adding two digs, a block and a service ace from the opposite position.

Following this weekend’s matches, the Hurricanes hit the road for a pair of road contests in the northeast. Miami will play at Syracuse at 7 p.m., on Nov. 11 and will take on Boston College at noon on Nov. 13.