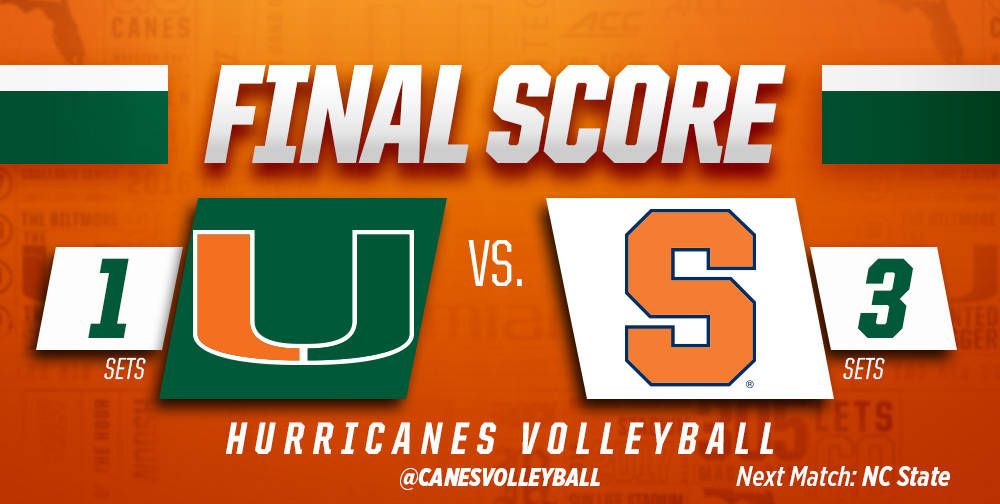 The Hurricanes (7-9, 1-3 ACC) hosted the Orange (3-11, 2-2 ACC) on Breast Cancer Awareness Day. Both teams battled, but Syracuse was physical at the net and that proved to be the difference.

“It was a close match,” Miami head coach Jose “Keno” Gandara said. “We’re more concerned about where we’re at in respect to our standards. We obviously did not meet our standards today. They played well. They blocked 14 balls, so that was something they did well.”

The Canes jumped out to an early 7-2 lead in the opening set, forcing Syracuse to call timeout and try to slow Miami’s momentum. The Hurricanes took a 10-point lead, 14-4, and continued charging to a 19-12 lead before Syracuse called timeout. The Orange cut Miami’s lead to four, 22-18, but the Hurricanes would close out the first set with a 25-19 win.

Syracuse started hot in the second set, taking a 14-7 lead before Miami called timeout to regroup. A resilient Hurricanes team battled back to tie the set at 22 and reached set point, 24-23, but Syracuse would claw back to even the set at 24 and 25 before evening the match with a 27-25 win before the intermission.

The Hurricanes and Orange played tight early in the third set, with the two teams knotted at seven, but Syracuse jumped to a 20-14 lead that forced Miami to call timeout. Syracuse continued to push, reaching set point at 24-18. Miami would make a late push, cutting the lead to two, but dropped the third set, 25-22.

Syracuse and Miami continued their back and forth battle in the fourth set, playing to a 14-10 Syracuse lead when Miami called timeout. The Orange extended its lead to seven, 17-10, but the Hurricanes cut it to three, 21-18. Syracuse closed out the set, 25-21, and the match in four sets.

Olga Strantzali led the Hurricanes with a career-high 25 kills and recorded her fifth double-double of the year, tallying 10 digs while hitting .277 and tying her season-high with five service aces.

Kolby Bird had six kills and hit .312 for the match, adding five digs and a team-high four blocks. Madison Dill had four kills and a block in reserve, while Sakile Simmons added three kills.

Hannah Sorensen dished out a career-high 50 assists, adding five digs and a kill, while Sylvia Hernandez had 15 digs and three assists as Miami’s libero. Sara Duque had 11 digs in her second career start.