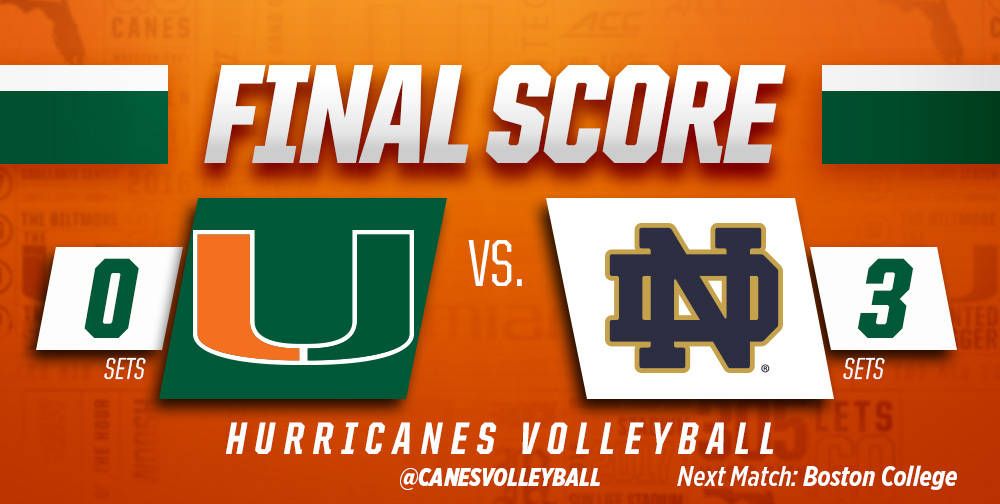 The opening set was hard fought between both teams, but Notre Dame would earn the win, 25-22, to take a 1-0 lead in the match. The Hurricanes kept it close, despite having six service errors, two ball handling errors and giving up five service aces.

“We had six serving errors, two ball handling errors and gave up five aces, so we gave up too many points to a good opponent,” Gandara said.

Notre Dame would win the second set, 25-15, to take a 2-0 lead into the intermission. Miami made a late push in the set, but a 22-6 deficit would prove to be too much to overcome.

Miami and Notre Dame battled again early in the third set, before the Irish took an 8-3 lead and forced the Canes to call timeout. Notre Dame continued to apply pressure on Miami, building up a 21-13 lead before closing out the set, 25-15, and the match in three sets.

“In Game 2, they played really well and we got stuck in a rotation,” Gandara said. “In Game 3, we played better, but it was a little bit of an uphill battle.”

Anna Haak and Kolby Bird each recorded seven kills against the Fighting Irish. Bird hit .385 for the match, adding two digs, a block and an assist. Haak had eight digs and an assist against Notre Dame.

“Our numbers show a lot of improvement, we’re just not cashing in on it, yet,” Gandara said. “We just have to keep doing the same and expect to continue to improve. We are right there, even though the score doesn’t show it.”

Following this weekend’s matches, Miami will host Boston College and Syracuse during the second week of ACC play. Boston College will face Miami at the Knight Sports Complex at 7 p.m. ET on Sept. 30, while Syracuse plays the Canes at 1 p.m. ET on Oct. 2.