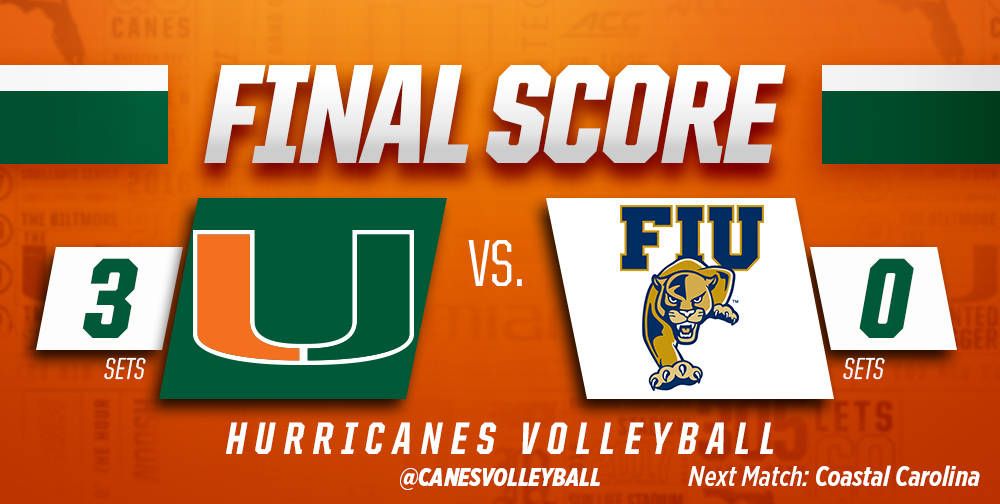 The Hurricanes (2-0) used 10 players in a three-set victory over the Panthers, with Miami head coach Jose “Keno” Gandara trying out different lineups throughout the match. Miami and FIU met for the first time since Sept. 11, 2010, a match that also ended in a 3-0 Hurricanes victory.

“We are always looking for answers to our questions in non-conference play,” Gandara said. “We found some good combinations today, but we need to keep looking. The girls are playing well and working hard, but we have to see how they do when it counts.”

Miami jumped out to a 10-4 lead in the opening set before FIU called timeout to try and slow a charging Miami team. The Canes continued their strong start, closing out the opening set victory, 25-12. Anna Haak and Olga Strantzali led a balanced and efficient Hurricanes’ attack with five kills each, while the team hit .448 for the set against the Panthers.

“We know some things are working and what the block is doing, but we want to continue to develop our offense and prepare for what’s coming in the ACC,” Gandara said.

The Canes started fast in the second set, taking a 6-0 lead that was capped by a Haley Templeton ace, before FIU called timeout. The Hurricanes continued their strong play, winning the second set, 25-11. Sakile Simmons was Miami’s top attacker, tallying five kills on a .667 hitting percentage.

Miami closed out its sweep of crosstown rival FIU with a 25-14 victory in the third set. Sophomore Kolby Bird tied with Simmons with a set-high three kills, while Templeton recorded four service aces to help secure the set and the match.

Templeton was a standout against the Panthers, keeping Miami’s offense in sync to the tune of a .376 attack percentage. The Preseason All-ACC selection closed out the match with 36 assists and a career-high six service aces that ranks third-best in a match in UM history. The junior also had three kills, three digs and a block against FIU.

“The passing was great today and the hitters were on point,” Templeton said. “Everyone was so focused and we were able to run our offense. Getting this win gives us a lot of confidence for tonight. We were able to put some new girls out there today and it all went well. Now we are excited for tonight.”

Haak and Simmons tied for the team-lead with nine kills apiece. Simmons, who hit a team-high .667, also added three blocks. Haak, who finished with a .389 hitting percentage, added eight digs, an ace and a block.

Strantzali was another dangerous attacker for the Hurricanes, recording eight kills and a .417 attack percentage. The junior Preseason All-ACC honoree had six digs, two aces and a pair of blocks.

Brooke McDermott tied a career-high with six kills, adding two digs and a block, while Bird had three kills in her season debut. Freshman Madison Dill made the first start of her Hurricanes career and finished with five kills and three blocks, while hitting .385 for the match.

“Being my first start, I was pretty nervous,” Dill said. “But once the first serve came, I got into the groove of it and felt comfortable. It’s been really tough adjusting to college volleyball, but I’ve been working really hard in practice. I still have a lot to learn, but I have come a long way already.”

Libero Sylvia Hernandez led the Canes with a career-high 17 digs, while freshman Carly Davey had an ace in her Hurricanes debut. Sophomore defensive specialist Codi Lee chipped in with four digs in the victory.

The Hurricanes will close out the UM/FIU Invitational on their home floor Saturday night against Coastal Carolina. First serve is scheduled to begin at 7 p.m., and the match will be broadcast live on ACC Network Extra.