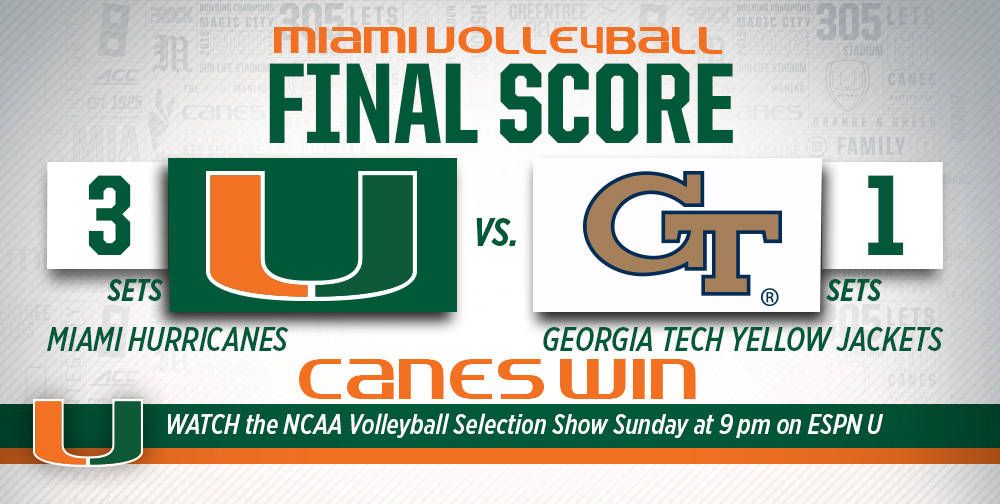 CORAL GABLES, Fla. – The University of Miami volleyball team closed out the 2015 regular season with a four-set victory at Georgia Tech.

The Hurricanes (21-9, 14-6 ACC) could not slow a hot Georgia Tech team playing on its home floor in the opening set. The Yellow Jackets jumped out to a 12-3 lead and never looked back, winning the first set 25-16.

But Miami would mirror Tech’s hot start in the opening set with their own in the second set. The Hurricanes built a 12-4 lead, forcing Georgia Tech to call timeout to try and slow the charging Canes. But Miami stayed hot to clinch the second set, 25-11, and even the match at one set a piece heading into the intermission.

The third set would prove pivotal out of the break and both teams came out hungry. The Canes called a timeout with Tech leading 8-7 and it proved beneficial, as Miami would answer with a 5-1 run to force a Yellow Jackets timeout at 12-9. Tech would take the next five points to regain the lead at 14-12 and force the Canes to call their final timeout of the set. Miami answered, scoring four straight points to jump ahead 16-14 and force a Tech timeout. The Canes would take nine of the final 14 points to secure the 25-19 win and take a 2-1 lead in the match.

The Yellow Jackets continued to fight in the fourth set, but could not hold off a Miami team looking to close out the match. The Canes finished off the afternoon with a 25-19 victory to secure the four-set win at Georgia Tech.

Four Hurricanes recorded double-digit kills on Friday afternoon, led by redshirt junior Kelsie Groot. The outside hitter registered a team-best 18 kills to go with a stellar .387 hitting percentage. Groot added 12 digs, earning her team-best 10th double-double of the year, and had an ace and a block against Georgia Tech.

Freshman Anna Haak was outstanding for Miami, coming off the bench to record a career-high 16 kills to go with a .414 attack percentage. Haak added four digs and three blocks, providing a big boost for the Canes on Friday.

Sophomore Olga Strantzali turned in a big day on the attack, finishing with 14 kills while hitting an excellent .632 for the match. Strantzali also recorded seven digs, a block and an ace against Tech.

Senior Alexis Mourning rounded out the Canes with double-digit kills, finishing with 10 while hitting .429 against the Yellow Jackets. The middle blocker added three blocks, tying with Haak for the team lead. Fellow middle blocker Sakile Simmons was an efficient attacker, hitting .750 with three kills and adding a pair of blocks.

Georgia native Haley Templeton shined in her home state, dishing out 54 assists and helping the Hurricanes hit a season-best .407. The sophomore setter also recorded six digs, four kills, a block and an ace.

The Hurricanes will tune into the NCAA Division I Women’s Volleyball Championship Selection Show on Sunday, Nov. 29 as the 2015 NCAA Tournament field will be announced at 9 p.m. on ESPNU.