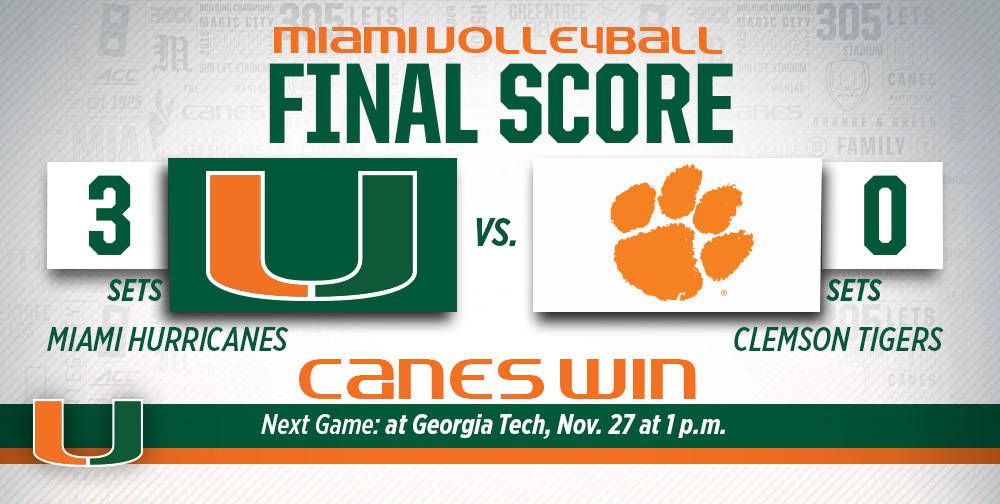 CORAL GABLES, Fla. – The University of Miami volleyball team picked up its 20th win of the 2015 season with a three-set victory at Clemson.

The Hurricanes (20-9, 13-6 ACC) battled back from a 15-10 deficit in the opening set to beat the host Tigers, 26-24. Junior Kelsie Groot was huge for the Canes in the opening set, tallying seven kills while hitting .538 and making zero errors on 13 attacks. Miami saw six different players combine for 17 kills in the first set at Clemson.

The second set proved to be a tight one early, with Miami taking a timeout down 12-11 to Clemson. But the Hurricanes would go on a 9-1 run over the next 10 points to take a 20-13 lead and force Clemson to take their second timeout of the set. The Canes would close out their 25-16 victory in the second set to head into the intermission up two sets to none.

Miami closed out the three-set sweep over Clemson with a 25-20 victory in the third set. With the victory, the Hurricanes secured their second consecutive 20-win season under Miami head coach Jose “Keno” Gandara and their fifth since 2010.

Groot finished the night with a team-high 12 kills, while making just two errors to hit a strong .385 for the match. The junior added nine digs, a block and an assist in the victory.

Olga Strantzali was the second Cane to finish with double-digit kills, tallying 11 kills to go with a stellar .429 attack percentage. The sophomore, who was named Second Team All-ACC on Wednesday, added five digs, a block and an ace against Clemson.

Freshman Anna Haak was impressive off the bench, recording nine kills and nine digs, adding an ace and a block, to go with an impressive .318 hitting percentage.

A trio of middle blockers combined for 14 kills and five blocks, led by Second Team All-ACC selection Alexis Mourning. The senior captain compiled eight kills and a team-high four blocks, while sophomore Sakile Simmons had five kills and hit .714. Freshman Lucia Pampana added one kill and one block against Clemson.

Haley Templeton proved herself to be an All-ACC player, dishing out 43 assists and helping the Miami attack hit an impressive .373 for the match. The sophomore, who earned her second straight Second Team All-ACC selection on Wednesday, added six digs, three kills, two blocks and an ace.

The Canes will face the Yellow Jackets in the regular season finale at 1 p.m. on Friday. Following this weekend’s action, the Hurricanes will tune into the NCAA Division I Women’s Volleyball Championship Selection Show on Sunday, Nov. 29 as the 2015 NCAA Tournament field will be announced at 9 p.m. on ESPNU.