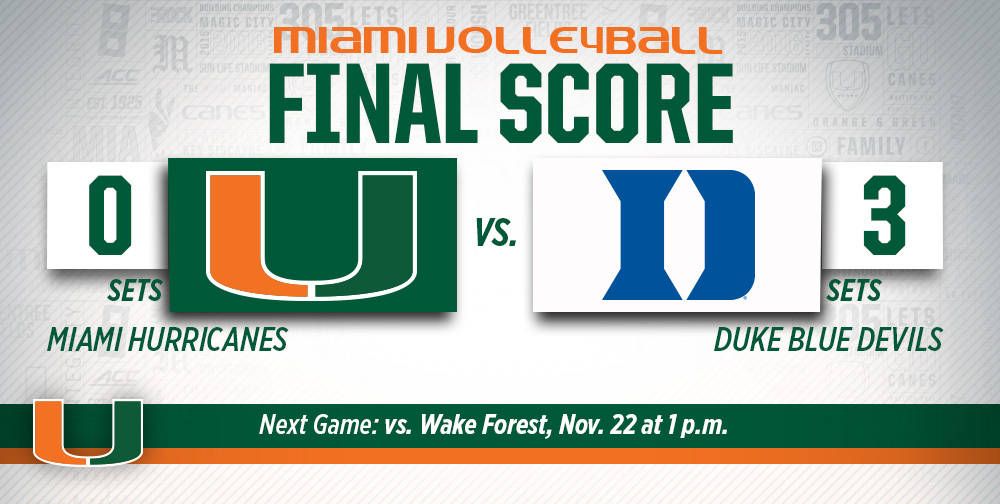 Duke opened the match on a 7-1 run, forcing Miami to call timeout to regroup. The Hurricanes ( 18-9, 11-6 ACC) did exactly that, charging back to take their first lead of the match at 13-12. The Canes and Blue Devils continued to battle back and forth in a first set that included 11 ties and six lead changes, but Duke prevailed 25-22 to take the opening set.

“We just have to be ready to play every point and not let the situation or the circumstances dictate how we play,” Miami head coach Jose “Keno” Gandara said. “That’s a sign of maturity and toughness and they were tougher than us tonight.”

The third set was another tight one as the teams had 8 ties and five lead changes before Duke led 15-14 at the media timeout. The Blue Devils would score 10 of the next 14 points to take the third set, 25-18, and the match.

“I give them a lot of credit,” Gandara said. “They had a good game plan. The match kind of went their way a little bit. They were better than us.”

Sophomore middle blocker Lucia Pampana had three kills and three blocks, while freshman outside hitter Kolby Bird chipped in with four kills and three digs off the bench.

Prior to the match, the Hurricanes recognized Donahoe, Mourning, Scott and White as part of Senior Weekend. The players ran through the smoke and a tunnel of their teammates, received flowers from the Miami coaching staff and were greeted by family on the court.

The Hurricanes, who are 12-2 at the James L. Knight Sports Complex this season, will host Wake Forest at 1 p.m. on Sunday in the final home match of the season. Admission is free to all Miami home volleyball matches.

Following this weekend’s action, Miami will hit the road for the final weekend of the 2015 regular season. The Canes will travel to Clemson and Georgia Tech to close out ACC play, facing the Tigers at 7 p.m. on Nov. 25 and the Yellow Jackets in the regular season finale at 1 p.m. on Nov. 27.