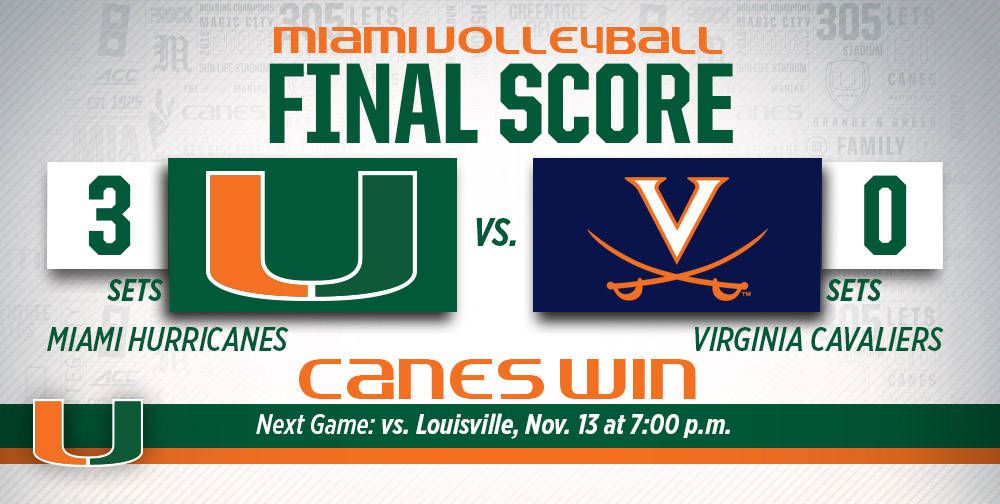 CORAL GABLES, Fla. – It’s Homecoming Week at the University of Miami and the Hurricanes volleyball team defended its home court on Friday against Virginia.

The Canes (17-7, 10-4 ACC) took the opening set, 25-20, to jumped out to an early lead in the match against the visiting Cavaliers. Miami got off to a hot start on Friday night, opening with a 6-1 lead that forced a Virginia timeout to try and slow the Canes. Seniors Alexis Mourning and Taylor Scott were huge for the Hurricanes in the opening set, each recording four kills. Mourning also had three blocks, while setter Haley Templeton dished out 10 assists and helping Miami hit .324 for the set.

Miami took a two sets to none advantage into the intermission after the Canes were dominant in a 25-11 win in the second set. A balanced Hurricane attack hit .455 against Virginia with Templeton picking up another 10 assists and adding two service aces.

Virginia took it’s first lead of the night when it scored the first three points of the third set, but Miami answered with six consecutive points to force the Cavaliers to call a timeout to try and slow a charging Hurricanes squad. The Canes would not look back, closing out the three-set sweep with a 25-17 win in the final set.

“I really liked the intensity,” Miami head coach Jose “Keno” Gandara said. “It’s a tough match after a big win Wednesday against a quality opponent in Virginia. I thought we served really well, kept them on their heels and simplified a lot of things. I just liked the energy and the enthusiasm. They’re seeing that things that we’re working on are getting better and that’s important.”

Mourning was a standout for Miami, tying for the team lead with 11 kills and leading the Hurricanes with five blocks. The senior middle blocker also hit an impressive .500 for the match, while adding a service ace.

“Haley put me in really good positions,” Mourning said. “She really opened it up for me and I took advantage of it. And I think really our passing and our serving was great tonight. We were in system the entire time and we kept them out of system, so it was in our favor.”

Scott joined Mourning atop Miami’s kill leaderboard with 11, adding five digs, two blocks and an assist, while junior Kelsie Groot and sophomore Olga Strantzali also made some noise for the Canes.

“I think everything was connecting with Haley,” Groot said. “I felt comfortable taking big swings and knowing my team was there to cover me if we were to get blocked.”

Both players had seven kills apiece, with Groot not making a single error in 16 attempts to hit a stellar .438 with nine digs and a service ace. Strantzali was supremely efficient, hitting .667 to lead all Canes while adding two service aces and a block.

“Olga was patient, took good shots at the right time and was really efficient,” Gandara said. “As for her serving, I think she likes serving in this gym. It was nice.”

Templeton played a key role in keeping Miami’s offense efficient, dishing out 33 assists while helping the Canes hit .352 as a team for the match. The sophomore setter added four digs, two blocks and tied for the team lead in services aces with two.

“The credit goes to the coaches,” Templeton said of Miami’s success offensively. “They did great scouting. They knew exactly what our game plan was supposed to be. Then, everyone came out tonight and did what they needed to do.”

“Sakile did a good job blocking,” Gandara said. “I thought we had a good game plan on both sides of the ball. We executed, so it was a good night.”

Duke and Wake Forest will also travel to Miami as part of the extended homestand that runs through Nov. 22. All Miami home matches are played at the James L. Knight Sports Complex on the University of Miami campus and admission is free.