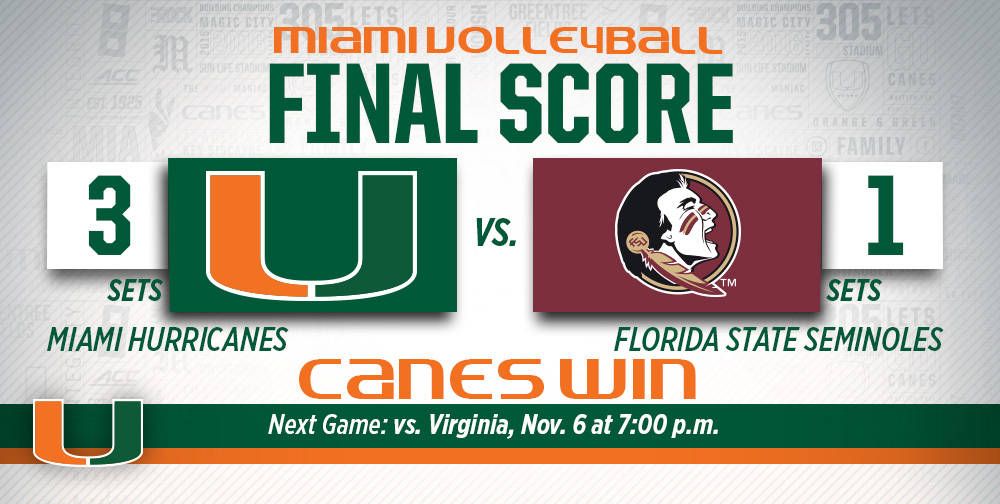 CORAL GABLES, Fla. – Two rivals walked into the James L. Knight Sports Complex on Wednesday night and one left a big winner as the University of Miami volleyball team defeated No. 17 Florida State in four sets.

A capacity crowd off 1,200 loud and proud fans saw the Hurricanes (16-7, 9-4 ACC) defend their home court against the rival Seminoles. The four-set victory over the 17th-ranked Noles is Miami’s second win against a ranked opponent this season as the Hurricanes beat No. 20 Purdue in five sets on Sept. 12.

“I didn’t have to say much to get them excited for this match,” Miami head coach Jose “Keno” Gandara said. “It’s just the nature of the rivalry. I liked their composure. I could see the nerves were flowing early on both sides. I liked the way we settled down, even when they made some pushes in Game 4. We were stable and consistent with what we wanted to do. I think we’re maturing. We’ve been playing better and better on the road, but it’s a lot easier at home.”

The Knight Complex was rocking just before the 7 p.m. first serve, but Florida State came into the Hurricanes’ gym ready to play. The Seminoles took the opening set, 25-20, thanks to an efficient attack that hit .308 in the set. But Miami also had some positives as Kelsie Groot and Taylor Scott combined for 11 kills, making just three errors on 21 total attempts against the Noles.

Knowing that a win in the second set would be crucial, the Hurricanes charged to a 25-23 win to even the match at one set apiece. Olga Strantzali was a big contributor for Miami, recording six kills while hitting .667 and adding an ace. Haley Templeton was also a key factor in the second set victory, dishing out 14 assists and adding two service aces.

“Every match is important, but a match against FSU is always important to us,” Strantzali said “We knew we had to bring our best and we went out and played well.”

The Canes and Noles went into the third set determined to earn a 2-1 advantage in the match and both teams battled down to the final point. Miami was able to push through and earn a 28-26 victory in the third set and take a 2-1 lead thanks in large part to the stellar play of Scott. The senior accounted for nine of Miami’s 18 kills, while hitting a superb .412 for the set.

“I think the way Game 3 ended was a little deflating for them and we took advantage of it with our serving in Game 4,” Gandara said. “That was the strategy from the beginning—serving tough. We had some good targets and it paid off.”

The Hurricanes carried the momentum from the third set victory into the fourth as Miami charged out to a 5-0 lead to open the set. While Florida State got within two, 8-6, the Canes never looked back and took the fourth set, 25-14, to clinch the match.

“I think they’re a good team,” Gandara said of Florida State. “We have played and will play other good teams that aren’t ranked, but it’s definitely something that’s going to hopefully pay off at the end of the year if we make a run and get into the NCAA Tournament.”

Miami had three players finish with double-digit kills in the match and three Hurricanes recorded double-doubles against the Seminoles.

Scott was Miami’s most prolific attacker, leading the Hurricanes with 20 kills on a strong .349 attack percentage.

“We’re really excited,” Scott said. “It was kind of disappointing last weekend after losing at Pitt, so just to turn around and win at home and keep getting Ws on our home court is great. I’m really glad that we won and it’s just going to get better for us going forward.”

The talented outside hitter added 10 digs, three assists and two blocks to record her sixth double-double of the season.

“She’s a senior and she’s taken on that role as a leader,” Gandara said of Scott. “She helped us in a lot of ways. She played more defense today and it paid off. She passed well. They were serving her and putting pressure on her and she hung in there. She was great.”

Strantzali had one of her best games as a Hurricane, finishing with 16 kills on a team-leading .464 hitting percentage. The sophomore outside hitter also tied her career-high with five service aces and added eight digs and two blocks in the victory. The Greek native also had her stellar performance in front of two of her biggest fans whom got the chance to see her play in person as a Hurricane for the first time.

“My parents were here today, so I think having them here helped me a lot,” Strantzali said. “I just felt great today. I served this morning and I felt that I had a great serve, so I felt comfortable when the match started. And the fans were so great. In Greece we don’t have these crowds, so it was something new for me and I loved it.”

Groot was the third Hurricane to record double-digit kills, tallying 15 on the night. The junior outside hitter added 10 digs to earn her eighth double-double of the season.

Haley Templeton kept Miami’s offense moving, dishing out 48 assists to go with her 10 digs, two blocks and two service aces. The sophomore setter was the third Cane to earn a double-double on Wednesday night, her sixth of the 2015 season.

“Our team couldn’t have gone out and played any better than they did tonight,” Templeton said. “We prepared all week for it and it showed on the court. It’s amazing and it shows that we are so much better than how we’ve been playing. We can be so good in the ACC and that we’re still in it.”

Middle blockers Alexis Mourning and Sakile Simmons also were active at the net, combining for eight blocks. Mourning had seven kills and a service ace to go with her team-best six blocks, while Simmons came up with a pair of big stops against the Noles.

“It feels really great to beat our rival, FSU,” White said. “I’ve only been here two years and we hadn’t done it until today. It just feels really good to beat them.”

After dropping a five-set heartbreaker at Florida State in the 2015 ACC opener on Sept. 23, Wednesday’s win over the Seminoles is Miami’s first since defeating a sixth-ranked Florida State team in four sets in Coral Gables on Sept. 7, 2012.

“I think both teams are a little different,” Gandara said. “It was nice to play at home just like I’m sure it was good for them to play at home the first time. When we played there, I felt it was two different matches—the first couple of games we gave them a lot of points and then it was a much closer match. In Game 5, they played a little better than us. I think we were a little more consistent this time around.”

The Hurricanes will look to carry the momentum from Wednesday’s victory over the 17th-ranked Seminoles into Friday’s home match against Virginia. First serve against the Cavaliers is set for 7 p.m. in the Knight Sports Complex.

“This team keeps surprising me,” Gandara said. “We played okay last weekend. We just fell short to a pretty good Pitt team that was playing well at the time. I had a good feeling about the way we would respond from that. I expect good things from this team. This week has two tough matches.”

Following this week’s matches, Louisville, Notre Dame, Duke and Wake Forest will also travel to Miami during a six-match homestand that runs through Nov. 22. All Miami home matches are played at the James L. Knight Sports Complex on the University of Miami campus and admission is free.