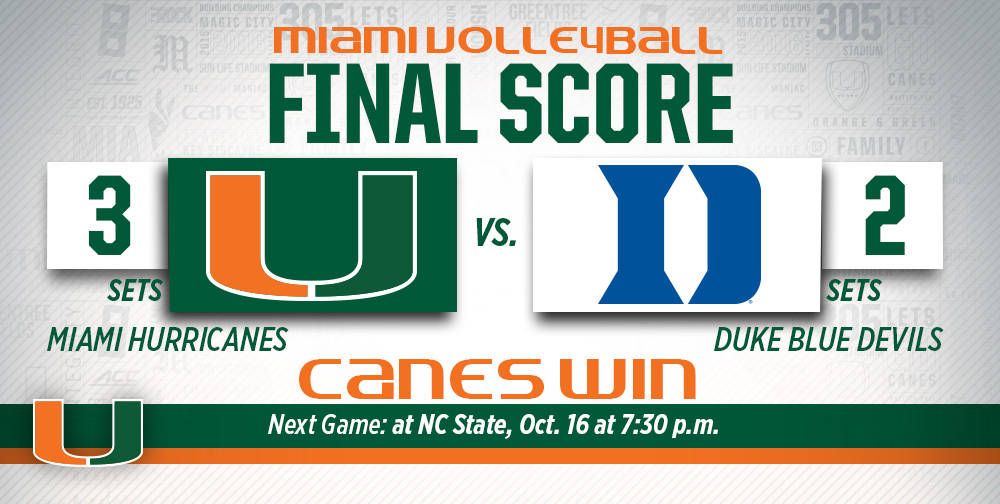 DURHAM, N.C. – The University of Miami volleyball team picked up a big road win on Sunday, beating Duke in a five-set thriller on the Blue Devils’ home floor.

The Hurricanes (11-5, 4-2 ACC) took the opening set, 25-22, thanks to a balanced attack that saw five different Canes register at least one kill against the Blue Devils. But Duke evened the match at one set apiece, taking the second set 28-26 to send the Canes and Blue Devils into the break tied 1-1.

Duke took the third set, 25-19, finishing off the set scoring eight of the final nine points to take a 2-1 lead in the match. But a resilient Miami squad returned the favor with a 25-19 win in the fourth set that forced a decisive fifth set at Cameron Indoor Stadium.

Miami outlasted Duke, 15-12, in the fifth set to clinch the Hurricanes’ first win in Durham since Nov. 10, 2012. The victory extended Miami’s current winning streak to four, with the Canes earning their fourth ACC victory of the season.

The Hurricanes had several players step up in Sunday’s road tilt, but few could match the high level of play brought by senior Alexis Mourning. The gifted middle blocker tallied 15 kills, while hitting a team-best .500 against the Blue Devils. Mourning also was a force at the net defensively, recording a team-leading seven blocks.

Olga Strantzali led the Canes with 18 kills, adding a career-high 20 digs to finish with her second double-double of the weekend and eighth of the season.

Senior Taylor Scott was the third Cane to finish with double-digit kills, recording 15 kills to go with her nine digs, four blocks and a team-high two service aces.

Haley Templeton dished out a career-high 56 assists in Sunday’s win over Duke. The sophomore setter added 10 digs and a block to record her fifth double-double of the season.

Miami’s next home match is set for Oct. 23 at 7 p.m. against Boston College. That same weekend, the Hurricanes will host Syracuse on Oct. 25 at 1 p.m. All Miami home matches are played at the James L. Knight Sports Complex on the University of Miami campus and admission is free.