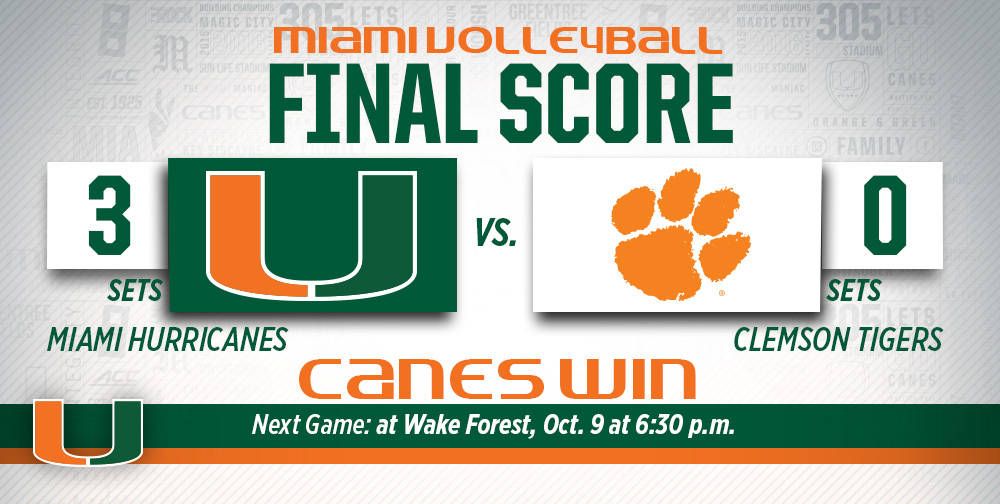 The Hurricanes (9-5, 2-2 ACC) took the opening set, 25-23 thanks to a strong showing by Miami’s attack. Taylor Scott and Kelsie Groot each had six kills in the set, while Miami hit .342 as a team to earn the first set win. The victory was Miami head coach Jose “Keno” Gandara’s 50th win as a head coach.

“It was a team effort,” Scott said. “If someone’s playing well, everyone just feeds off of it. Volleyball’s about momentum, so that helped out a lot and gave confidence to everyone to hit their shots and trust in them.”

Miami took the second set in impressive fashion, winning 25-16. Scott and fellow senior Alexis Mourning combined for eight kills, while Olga Strantzali added five kills and three aces to help the Canes take the set and head into the break up 2-0.

The Canes closed out the victory with a 26-24 win in the third set. Groot led the charge with seven kills in the match-clinching third set, while Miami saw reserves Sylvia Hernandez, Caitilin Donahoe and Sakile Simmons contribute off the bench.

“I think that they’re a good serving team,” Gandara said. “That keeps you in the game at any level. They did a good job serving our weaknesses and exposed us a little bit.”

Groot and Scott tied for the team lead with 14 kills apiece. The senior Scott hit .393 against the Tigers, adding eight digs. Groot finished one dig shy of a double-double, hitting .370 with nine digs, a block and a service ace.

“We appreciate every win because the ACC is a great conference,” Scott said. “We’re pumped, but now we just have to focus on ourselves. We need to continue to trust ourselves, our technique, and what our coaches say. That’s the most important thing.”

Sophomore Olga Strantzali had nine kills while hitting .316 against Clemson. The gifted outside hitter led Miami with 12 digs and also had a team-high four service aces.

Miami’s offense was run smoothly by setter Haley Templeton. The sophomore distributed 39 assists and added five digs and a block while helping the Hurricanes hit .343 as a team for the match.

“I like the energy and I like the distribution, the way we ran our offense,” Gandara said. “Our transition game wasn’t great, but it’s something we’re working on. I thought our serving was good and we responded okay.”

“We have to be careful not getting caught up in the results,” Gandara said. “I think we are getting better, but we have a long way to go. The ACC is going to be tough every weekend and we have to be ready for those kinds of matches.”

The Hurricanes hit the road following this week’s two home victories, traveling to Wake Forest and Duke next weekend and NC State and North Carolina the following weekend. Miami will face Wake Forest at 6:30 p.m. on Oct. 9 and Duke at 1 p.m. on Oct 11.

“I think we came out with a good win and it’s good to keep the winning streak going,” Groot said. “Now we can keep moving forward and I think we can feed off of this momentum in the next coming weeks. Playing on the road is hard, but this weekend was definitely a confidence booster being in front of our home crowd and playing well.”

The Canes’ next home match is set for Oct. 23 at 7 p.m. against Boston College. That same weekend, Miami will host Syracuse on Oct. 25 at 1 p.m. All Miami home matches are played at the James L. Knight Sports Complex on the University of Miami campus and admission is free.