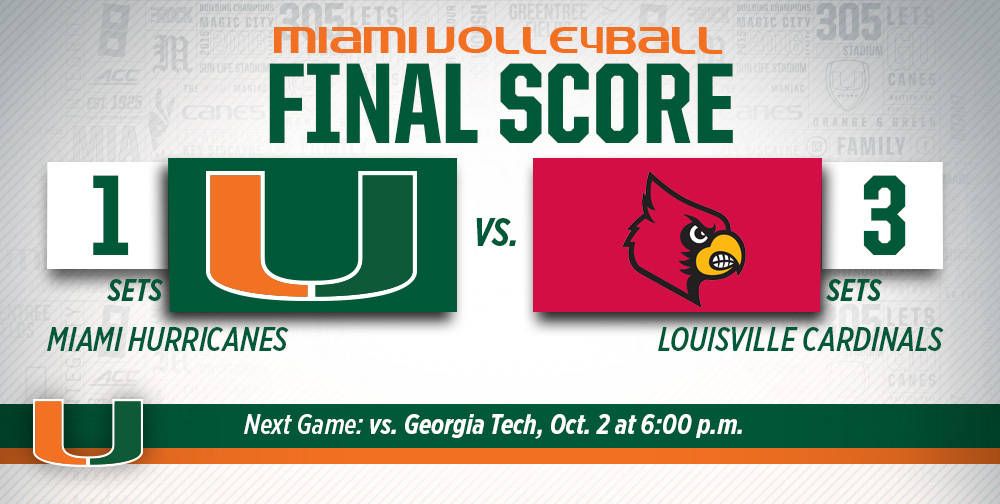 LOUISVILLE, Ky. – The University of Miami volleyball team dropped its match at Louisville to the host Cardinals on Sunday, 3-1.

The Hurricanes (7-5, 0-2 ACC) took the opening set, 25-22, but Louisville evened the match with a 25-19 win in the second set to go into the break tied at one set apiece. The Cardinals charged out of the intermission, winning the third set 25-15 and closed out their victory with a 25-21 win in the fourth set.

Miami’s most efficient hitter was senior Alexis Mourning. The talented middle blocker led the Canes with a .368 attack percentage, adding nine kills, three blocks, three digs and an ace against the Cardinals.

Outside hitters Olga Strantzali and Taylor Scott each tallied seven kills apiece. The sophomore Strantzali added eight digs and a block, while the senior Scott had six digs and an ace.

Sophomore setter Haley Templeton dished out 34 assists and added an ace, as well as five blocks that tied for the team high with Pampana. Senior Kalysta White led the Hurricanes with 11 digs.

Miami returns to Coral Gables for their ACC home opener on Oct. 2, hosting Georgia Tech at 6 p.m. The Canes will round out their first home weekend of ACC play at 1 p.m. on Oct. 4 against Clemson. All Miami home matches are played at the James L. Knight Sports Complex on the University of Miami campus and admission is free. Both matches will also be broadcast on ESPN3.