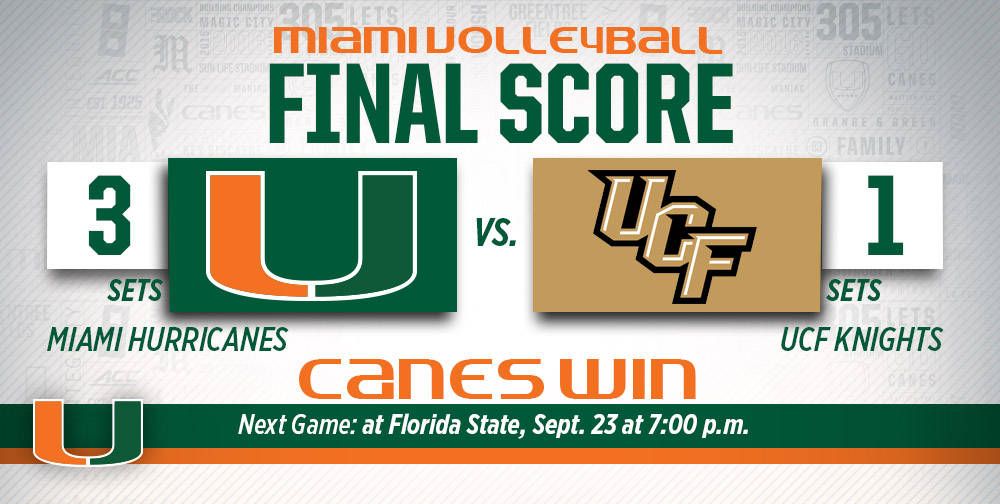 CORAL GABLES, Fla. – The University of Miami volleyball team closed out the FIU/Miami Challenge with a four-set victory over UCF.

The Hurricanes (7-3, 0-0) faced the Knights for the first time since their five-set victory over UCF in the first round of the 2014 NCAA Tournament. But Miami needed just four sets to protect its home court and defeat UCF for the second time in less than 12 months.

“I think those guys pushed back,” Miami head coach Jose “Keno” Gandara said of UCF. “They were good offensively on the left side. We have to serve a little better. They served well. It was by no means an easy match for us. I’m glad we came out with the win.”

Olga Strantzali’s six kills and two service aces helped Miami take the opening set, 25-22. The sophomore was one of five Hurricanes to record a kill in the opening set against UCF. But the Knights answered with a 25-17 win in the second set that was powered by an efficient and effective attack that hit .520 against Miami.

The Canes and Knights went into the intermission tied at one set apiece, but Miami charged to a 25-22 victory in the third set to take a 2-1 advantage in the match. Kelsie Groot led the way for the Hurricanes in the third set with four kills, but four other Canes also registered multiple kills in the set.

“We talked in the locker room after the second set,” Strantzali said. “We said that we had to close the left side. We had to limit our mistakes because we made a lot of mistakes in the second game, so that’s what we did.”

Miami closed out its victory over UCF with a 25-22 win in the fourth set. Groot was a force, tallying five kills in the set, while Strantzali, Taylor Scott, Alexis Mourning and Haley Templeton each added three kills in the final set to secure the team’s fourth straight win.

“Our mentality was just to stay calm,” Scott said. “Volleyball is a momentum game, so staying calm, trusting my ability and my teammates and my coaches was key.”

The Hurricanes had a trio of hitters record double digit kills on Friday night, led by Scott and Strantzali’s team-high 13. Both Scott and Strantzali recorded 11 digs with each player finishing with a double-double. Groot added 10 kills to round out the group.

“We stayed consistent with everything,” Templeton said. “Our new goal in practice was to get 19 kills before six errors, which really helped us stay together and keep our minds focused on something.”

Miami served well on Friday, with four players combining for seven aces. Strantzali led the way with three, while White had two and Scott and Kolby Bird each added one.