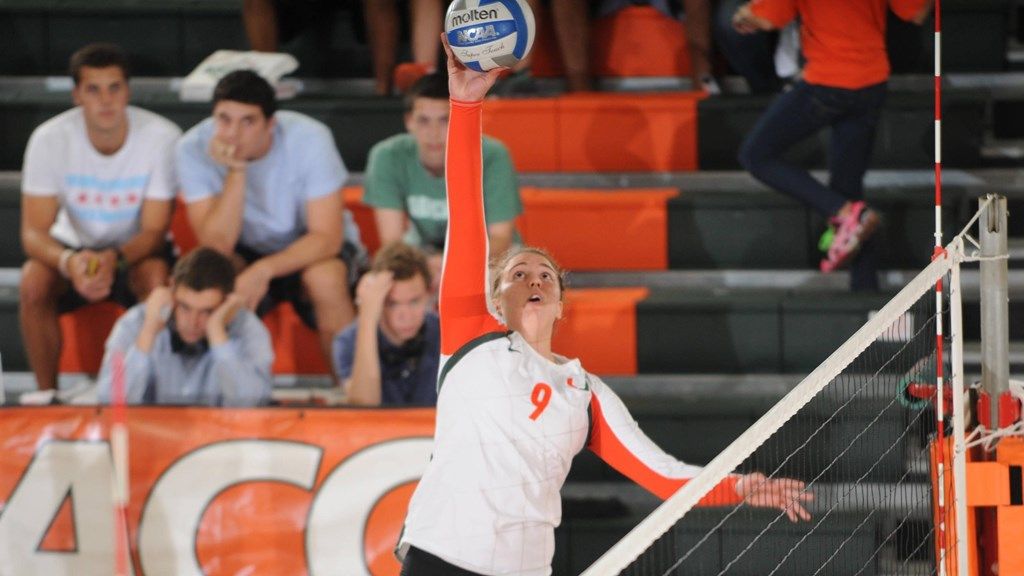 Miami swept the match against Florida A&M, 25-19, 25-17, 25-15, thanks to a balanced attack that featured eight players recording at least one kill against the Rattlers.

“A big positive was putting new players out there and seeing them be comfortable with each other,” Miami head coach Jose “Keno” Gandara. “We do that every day in practice, so to see them again maybe a little better than yesterday just kind of more comfortable in their role and switching roles, even the subs, was good. I thought today FAMU got in some rhythm. We held our composure a little better and eventually we prevailed a little bit. Serving was good again and we got Sakile involved a little better.”

Sakile Simmons, who had eight kills and hit .700 against Florida A&M, made a big impact in the second set. The freshman picked up three blocks and five kills, including the set clincher. Sophomore Kelsie Groot added four kills and three blocks. Miami’s attack made a big improvement from the first set to the second. The Canes hit. .233 in the first set, but stepped up a set later to hit .440.

“It’s been a little nerve-wracking, but exciting,” Simmons said of starting as a freshman. “I’m getting a lot of support from my teammates and the coaches. They all push me really hard to just get better and do everything we’ve been doing in practice, so it feels good. I’m just trying to put everything I have into the game.”

In the third set, Groot continued her steady play, adding four kills, three digs and a block. But it was junior Taylor Scott who came off the bench to tally six kills in her only action of the afternoon.

“They are all training together and they’re learning the same stuff and it’s great to see [Scott] step to the other outside position and do a good job,” Gandara said of Scott. “She passed well. She hit well. It might be an identity of this team. We have so many outside hitters that I’m just hoping that people start to develop in competition. We have some options, which is good.”

Groot finished the match with a team-high nine kills and 11 digs. Junior defensive specialist Kaylsta White tied with Groot with a match-best 11 digs.

“I just think the team shows great energy and we’re able to play from all those positions because you have a team that’s able to set up those plays,” Groot said. Getting the win today gives us confidence knowing we can show up tonight and bring it for the last match of the day.”

Sims and Leaf finished the match with a combined 12 kills, three blocks and three aces, while junior Misty Ma’a added five kills and six digs. Templeton distributed the ball all over the court, picking up 32 assists to go with four kills and an ace.

The Hurricanes are back in action Saturday night against Florida Gulf Coast. The final match of the Hurricane Invitational is scheduled to begin at 7 p.m. Admission is free.