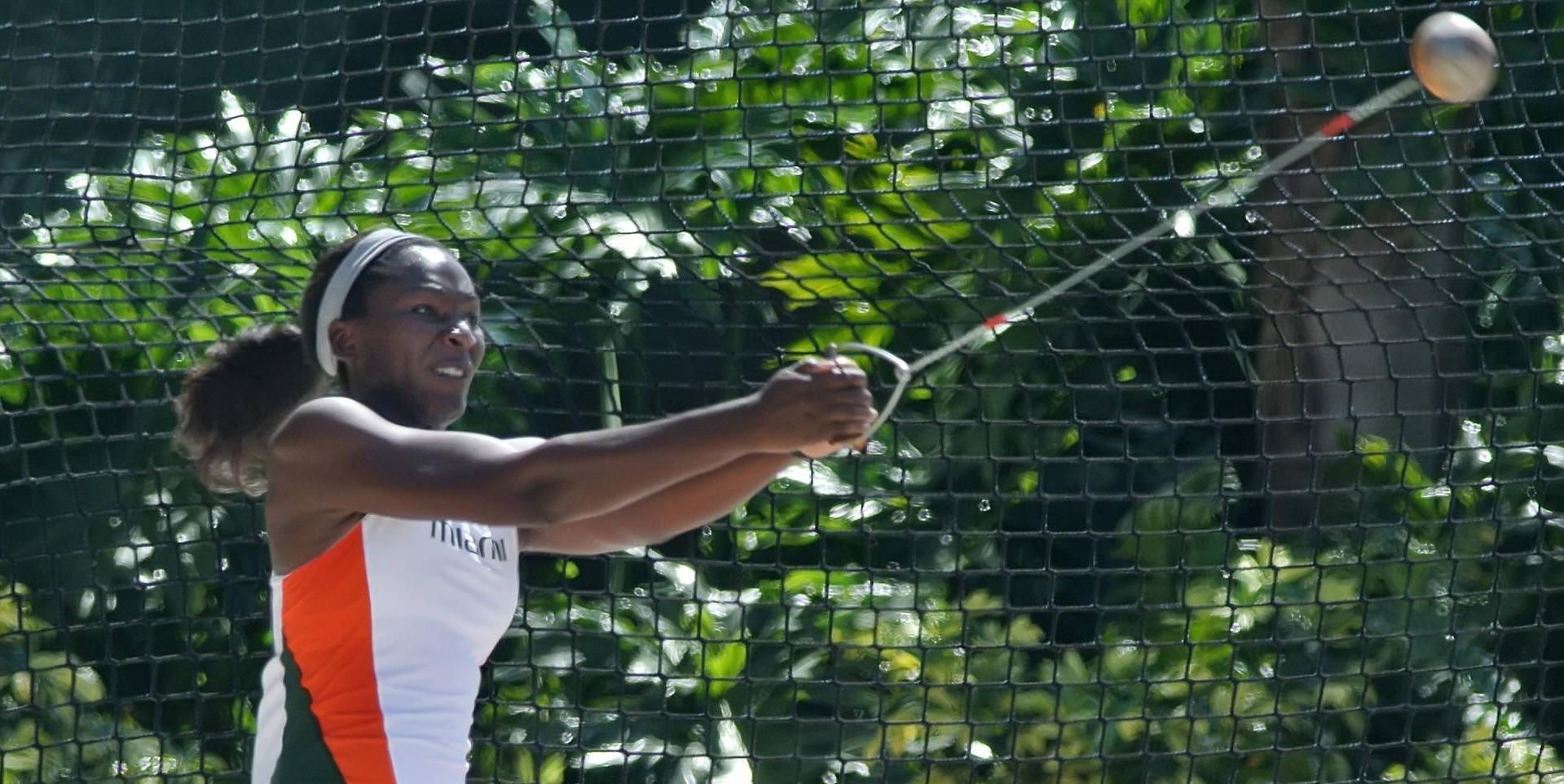 On Day 1 at the conference championship meet, the Hurricanes had one student-athlete win an ACC title, another scored the first points for the men’s team and two more posted the top times in their preliminaries.

“Overall, I think it was a really solid day for us and it sets the tone for the next two,” Miami director of track and field/cross country Amy Deem said.

Lea Johnson was Miami’s first woman to compete at the 2014 ACC Outdoor Championships and the junior also became the Canes’ first winner at the 2014 conference meet.

“Great effort and a great performance by Lea,” Deem said. “I challenged her yesterday in the team meeting to set the tone for the women’s team and she did a tremendous job to throw a personal-best and win an ACC championship.”

“Getting ACC champion indoor was kind of a surprise, but outdoor was always the goal,” Johnson said. “Getting ACC champion for the weight throw and the hammer is amazing. I work really hard and try to set a personal-best in every meet and I have so far this outdoor season. Now it’s about getting that record and being an All- American in hammer throw.”

Carlos Mangum got the Hurricane men started strong at the 2014 ACC Outdoor Championships. The freshman finished fourth in the men’s hammer with a throw of 56.42m, scoring five points for Miami’s men.

Jamika Glades will be the top seed in Saturday’s women’s 400m hurdles final. The sophomore won Heat 1 during preliminaries with a time of 58.53 seconds, the fastest overall time in the group of 20 competitors.

Shakima Wimbley also earned a top seed in a final, turning in the top time in the women’s 200m preliminaries. The freshman blazed down the track in 23.55 seconds, posting the best time among the 27-woman field.

“I thought Jamika ran with a lot of poise,” Deem said. “Shakima made a couple technical mistakes, but the important thing is to advance and we did that. To have the two qualifying times in those events, I am very happy with that.”

The three-day meet opened Thursday and will continue through Saturday, April 19. The 2014 ACC Outdoor Championships are held at the Belk Track, Fetzer Field and Finley Field on the campus of the University of North Carolina in Chapel Hill, N.C.

Fans can follow the action via ESPN3 and live streaming on theACC.com. Nearly 12 total hours of ESPN3 live coverage are scheduled including Friday from 4:30 until 8:30 p.m., and on Saturday from 4 until 8 p.m. Viewers can access the webcasts at http://theacc.co/OTFchamp.

Live results will be available throughout the event on the championship website: http://theacc.co/OTFlivestats.