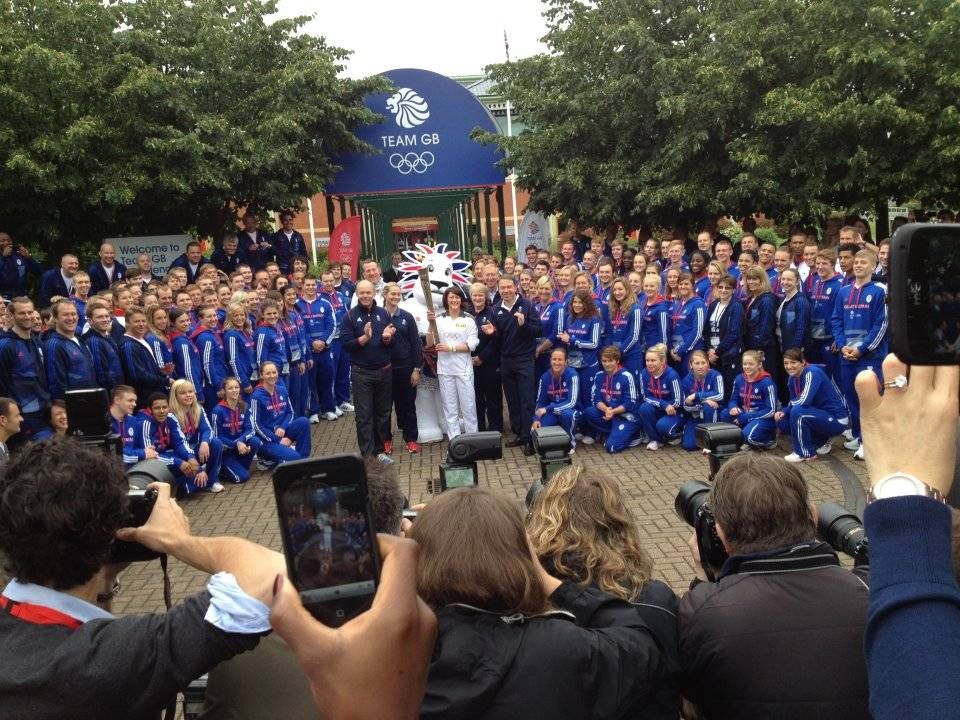 With a number of Canes set to compete in the 2012 Olympic Games starting later this month in London, HurricaneSports.com will be tracking their every move. With more coverage in the works, get a jump start with the blog of Ciara Michel and her description of two recent days as an Olympian in the host nation.

Wow. Absolutely, unbelievably, without a doubt…wow. For once in my life I am speechless.

Today, without question, stands out as one of the most memorable days of the Olympic experience…so far. I hope I can do it justice with a few words and pictures, and I will undoubtedly fall short (like several of the trouser legs I tried today), but I will give it my best.

It all began yesterday, with an extremely early wake-up call for us all to pile sleepily into our team vans en route to Loughborough University, a place many of our players called home in years gone by. Groggily sipping a coffee and tucking into a book on my new Kindle, a recent birthday gift, my mind drifted to expectations of the upcoming 2-day trip. Our coach, Audrey, was scheduled to be a torchbearer that morning, and images flashed in my head of the white jogging uniform I had seen so many times on TV, as well as the iconic gold torch itself, engraved with the 2012 logo and 8000 holes to represent each of the runners.

As we pulled up to the uni a little after 8am, we could already see a buzz around campus. We mulled around greeting family and lots of members of Volleyball England for an hour or so, until we were ushered toward the football pitch, the stands of which we discovered, were already overflowing with thousands of cheering school kids. From the centre a microphoned voice boomed out into the crowd, and 8 school mascots were duking it out in a mini track and field event. After a little time, from off in the distance we heard drums and whistles and music, and could see flashes of vibrant colourful fabrics. As they marched closer, we saw about 100 dancers with enormous wings, puffy skirts and all sorts of elaborate costumes make their way into and around the pitch. A short while later, the flame was in sight, and crowds of people were swarming around the barricades to get a glimpse. The runner enjoyed every moment of his time to shine, dancing a little jig with Audrey as he passed the flame along to her torch. It was finally her moment to shine. With a giddiness that is rare but infectious, she made her way past the player’s tunnel we had created, while we all snapped pics and cheered her on. Before I realized it, we were all jogging frantically (at a snails pace) behind her, alongside dozens of official `torch joggers’ and media folks, chanting `G what? GB!’ like an army platoon. It’s a blur or flashes and faces from here until Audrey’s destination, among the Team GB Ambitions program (which is about 100 potential future Olympians), Pride the Lion, Andy Hunt (CEO of the British Olympic Association) and Sir Clive Woodward (British Olympic Association Director of Elite Performance).

Fast forward one hour, and the insanity has died down to a mere 20 of us mulling around chatting. After an inordinate amount of photo snapping, giving quotes to local reporters, and playing with bubbles and other peoples children, its time to get back to reality. We have an s&c session scheduled at `Powerbase,’ so we shuttle across campus, passing a few snazzy Team GB BMW’s on the way. As we walk into the building, we need to show photo ID (although they didn’t have a list of names to check it against) before we are shown to our locker room. We walk through the enormous facilities, equipped with everything a good gym needs (x10), and I realize that our GB men’s basketball players are currently pumping a little iron themselves. Now, I follow Luol Deng on twitter like everyone else, but I would hardly call myself a big fan. But nevertheless I felt the excitement rising up in my tummy at the thought of fellow Olympians in my presence. `Come on Ci, play it cool’ says Audrey as we walk past, and I realize that I will need a lot of self-control not to be `that girl’ when we get into the village and are surrounded by celeb athletes. As I turn to my other side, I see a blast from the past. One half of our GB men’s beach volleyball team, Steve, a former coach of mine, whom I haven’t seen since I was 17 and living in Miami, and immediately all `cool’ goes out the window.

Later on, after a BBQ with Volleyball England and some friends and fam, to thank and congratulate Audrey on her day, and an extremely hot and sweaty training (spectated by some of our Paralympic athletes of the sitting volleyball team), I am pooped to say the least. We round out the day with a fancy dinner at a Japanese restaurant nearby, and soon I find myself on Grace’s sofa, sipping tea and relaying the day’s activities to her parents who have housed us for the night. After a few bedtime tweets and 1% on the kindle, I’m out like a light, dreaming of what the next day has in store (team gear to be precise).

I wake up at 5am, and rather than relief I feel disappointed that I have another 3 hours of sleep ahead of me before the day can start. But at 10am we arrive at the `kit out’ building, and the excitement is at a maximum.  (If you are a selected member of team GB, not yet kitted out, DON’T READ ANY FURTHER! I don’t want to ruin this experience for you, the surprise is really half the fun.)

We are greeted by smiling faces that know how excited we must be, and we sign in (with much more attention to detail and I.D. checking this time). I follow my teammates eagerly up the stairs to a holding area with tea, coffee and an assortment of books with messages of luck for the athletes. I know by looking at my assigned wristband that I will not be leaving this area for another 2 hours, so I settle comfortably into a couch cushion. But the relaxation is short-lived, as soon a royal procession comes marching up the stairs, and I am face to face with Princess Ann babbling about how I hope our involvement in the Olympics will have an impact on the future and sustainability of volleyball in this nation. I wish I had been a little more prepared with some witty banter, as I have heard she enjoys a joke or two, but she is there for the experience as much as we are, and I am just lucky that our paths crossed at all.

After 2 cups of coffee, I am truly buzzing when my group is called to make a move. I had imagined, like most kit outs I have been to for various teams over the years, there might be a pile of clothes on top of a bag with a my name on a piece of paper. I was not prepared for what I was in for.

Down the stairs we are sat on a white bench in front of a flat screen of Andy and Sir Clive congratulating us, and lots of designers describing the concept behind the clothes. It’s all a flash of imagery and colours as I see what’s in store behind the next few doors, and I am officially ready to get this show on the road. Up the stairs again, it’s the top secret, confidential Next room, where we have our formalwear, and opening and closing ceremony outfits hanging, named, on racks next to private dressing rooms and `personal shoppers’ to attend to our every whim. I can’t reveal any details of these outfits, but I can say they were pinned and tailored to specificity on the spot, and we will look spectacular in them. End of.

But that’s not the end, not even close.

From this room, I’m escorted back down the stairs (yes we got a little work out today) to the designer floor, where I am introduced to not one, but two of my own personal shoppers. These guys were funny and patient and extremely understanding, saying all the right things even when I looked a right twit. Bless `em.

Here, the floor is set up just like a store really might be, complete with Jessica and Chris modeling on the walls, mannequins sporting the fashions, and random accessories scattered here and there. There are 5 sections to get through, each with racks and racks of sizes in men’s and women’s. We’ve got jackets and more jackets, then t shirts and polos, sweatshirts, sweatpants, skirts, shorts, rain jackets, rain pants and more. Pull overs, zip ups, button downs, you name it. Long sleeve, short sleeve, no sleeve. We’ve got podium wear, and village wear, and formal wear and more. Shoes, sunnies, hats…the lot. I discovered early, that for most jackets and pants, men’s sizes were a better fit, as the rowers and basketballers might have snapped up all the extra long everything (not bitter at all!). Despite the utter excitement of it all, all this clothes fitting was draining on the energy, and I was in dire need of some refuelling.

After a quick lunch, it was on to competition wear, compression head to toe, and training kit. And this fun room has the photo booth, the culprit of much of our idle time. Complete with props for our (and your) amusement. After all the clothes were to our liking, upstairs we had a head shot, wall to sign, and a media room to attend to. Followed by a quick chat from BP, in a neon black and green and mirrored room, and a quick chat from the anti-doping crew. I also had a fun scan of my hand and foot, which will be embossed on the wall of a museum, somewhere, sometime in the future (details are hazy at this point after 6 hours of activity).

By 4:30, and I am rolling out of the building with an airport luggage mover, loaded up with 2 suitcases, 1 gym bag, 1 backpack and 2 suit bags. They also snuck in a few towels, pins and a rubber ducky. And an iPod nano loaded with messages of support from around the nation.

Back at the fire station on my bed, I am thoroughly exhausted. My armpits bear the remnants of blue, red and white lint from the plethora of shirts that I must have pulled on and off throughout the day. I can hear teammates rummaging though the goodies in the hallway, discussing likes, dislikes and fitting issues. My face is tired from all the Cheshire cat grinning, and my legs feel like I have had a hard day of training. Despite drooping eyes and finger cramps from typing hard the last half an hour, the excitement is creeping back into my belly. But although I love clothes as much as the next girl (and guy- I can hear Dave in the hallway giggling like a schoolgirl too), it’s not the clothes that give me goose bumps. It’s the idea that today I have officially become part of Team GB; the team that will unite the nation in just a few weeks’ time.

As of today, I feel like I am officially an Olympian. Part of Team GB competing in London 2012. Wow that feels good to say.