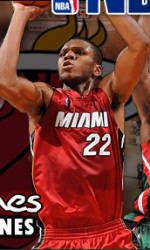 Canes in the NBA

James Jones
James Jones participated this past weekend in the NBA All-Star Three-Point Contest. He was on fire in the first round racking up an impressive 22 points, draining his last seven shots. Unfortunately in the second and final round when Kevin Durant and Kevin Love left the door wide open for him to overtake the two who were tied at 16; James dropped a disappointing 12 points to end his run as the three-point champion.

Jones attended the University of Miami from 1999-2003. He started every game his sophomore junior and senior season with the Hurricanes and racked up a total of 1356 points. He was picked 49th overall in the 2003 NBA Draft by the Indiana Pacers. He has played on four teams throughout his professional career which has brought him full circle back to his roots.

John Salmons
John Salmons had fallen into a bit of a slump and has found his way to the bench. King’s coach Keith Smart commented that Salmons will still be a key to the team in late minutes with his defensive prowess and that he will look to Salmons for a much-needed spark off the bench. Salmons has recently been fighting off the injury bug with a tweaked ankle and missed the last few games with a lingering hip injury.

Salmons attended the University of Miami from 1998-2002. He started 107 of 124 games while with the Hurricanes averaging 10.4 points, 5.5 rebounds, 3.5 assists and 1.0 steal per game over his four seasons. He was drafted by the San Antonio Spurs with the 26th overall pick in the 2002 NBA draft. After being selected he was immediately traded to the Philadelphia 76ers, where he would spend his next four seasons.