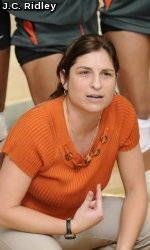 Coral Gables, Fla. – University of Miami head volleyball coach Nicole Lantagne Welch announced three signees during the early signing period for the Hurricanes on Wednesday, Dec. 21. The Canes welcome three players set to play for UMiami in the fall of 2012.

Miami, advancing to the Round of 32 in this year’s NCAA Tournament, will be looking to replace the talented and impactful senior class of 2011 that includes outside hitters Lane Carico and Christine Williamson, middle blocker Ali Becker and setter Katie Gallagher.

Incoming for the Hurricanes will be South Florida product Caitilin Donahoe; California native Kelsie Groot; as well as Misty Ma’a from the state of Hawai’i.

When asked about this year’s signing class, Lantagne Welch was excited to talk about the first three signees.

“What stands out about these three players is the amount of experience they bring with them,” said Lantagne Welch. “They are all great volleyball players now and at the same time they also have the ability to make great strides in their game while they are here in Miami. We are excited to see the impact they will make on University of Miami Volleyball.”

Caitilin Donahoe, referred to as Caiti by friends and family, is a product of Cardinal Gibbons High School in Miami. The 6-0 setter helped the Chiefs to a 25-2 record in 2011, in addition to Cardinal Gibbons advancing to the Class 4-A semifinals. The Chiefs spent much of the year ranked in the Top 25 nationally by ESPN.

The Chiefs primary setter will graduate from Cardinal Gibbons with a 4.7 GPA, as well as serving as a four-year letterwinner. She played club ball for the Boomers, assisting the team to Junior Nationals in 2008, a fifth place finish in 2009 and seventh place in 2011. She was a 2009 and 2010 First Team All-Miami Dade by the Miami Herald, as well as a three-year First Team Florida Region High Performance player (2008-10). In 2010, Cardinal Gibbons advanced to a state 4-A championship.

As a side note, Donahue is the granddaughter of Miami Dolphins legendary quarterback Earl Morrall.

“Caiti is what I call a true setter,” said Lantagne Welch. “That is her natural position and what she has always played. With that, she has a great deal of experience and has run quite a fast offense over the past couple of years. One thing that stands out about Caiti is that all the teams she plays for (high school and club) are very successful, and that is a sign that the setter is putting the team in a position to win and win often.”

The second signee for the Canes is Kelsie Groot from Irvine, Calif. Groot played on the same club team – TCA – as UMiami All-America performer Lane Carico, while attending Northwood High School and lettering for four years with the Timberwolves. With TCA, Groot qualified in Dallas for 17 Open Junior Nationals in 2011, and served as team captain.

In her high school career, Groot served as team captain for the Timberwolves and voted the team’s Most Valuable Player in each of her last three seasons. She was a three-time Orange County Register All-County selection, in addition to Irvine World News All-City, All-Sea View League and All-Pacific Coast League honoree as a sophomore, junior and senior. Named to the Orange County “Dream Team” her senior season and garnered Irving World News All-City MVP honors in 2010. She finished her prep career as a 2012 Prep Volleyball Senior Ace player.

“Kelsie is a great all-around outside hitter,” said Lantagne Welch. “She has played middle, outside and right side. So, she has the ability to attack a great variety of sets effectively, and at the same time she has great ball control. She brings size to the outside position as well. Kelsie is a hard-working competitor who will find a way to make a huge impact in our program.”

The third signee for the Hurricanes committed comes from a long line of talented volleyball players and was the 2010 Gatorade State Player of the Year in Hawai’i. Misty Ma’a is a 6-1 outside hitter from one of the most prominent schools in Hawai’i, Kamehameha (Honolulu). She is the daughter of former pro volleyball players Pono Ma’a and Lisa Strand. Pono was a two-time All-American at the University of Hawaii, while mother Strand led UH to its first two NCAA championships.

She was named as a Top 10 player at the Durango Classic in 2011 in Las Vegas, in addition to being selected First Team All-State (2011) and HHSAA All-Tournament Second Team (2011). She was voted the Impact Player of the Senior Invitational Tournament and helped the Warriors to an HHSAA State Championship Runner-Up trophy with a match-high 10 kills during her senior year. Ma’a finished her prep career named as a Prep Volleyball Top 100 Senior Aces performer.

“Misty is a versatile attacker and great athlete,” said Lantagne Welch. “She has experience playing every position along the front row. She has been playing volleyball forever with it running in her family. So, she has the anticipation to make the game look easy. I love that she becomes more dynamic the faster you speed up her tempo.”

The Canes will look to close-out their recruiting class during the spring signing period, according to Lantagne Welch.