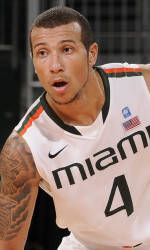 The Game
Miami (5-3) travels to Morgantown, W.Va. to face the West Virginia Mountaineers (5-2) on Dec. 10 at 7 p.m., the first of three-straight games on the road for the Hurricanes.

The Series
Miami looks to take the lead in the all-time series with West Virginia after splitting the first 14 meetings. The Canes are 6-2 in the past eight matchups, defeating the Mountaineers 79-76 in Coral Gables last season.

The Broadcasts
Catch the game on ESPNU with Sean McDonough and Len Elmore making the call. The game will also be carried live by 560 WQAM Radio with Joe Zagacki (play-by-play) and Josh Darrow (analyst).

The Coach
Head coach Jim Larranaga is in his 28th season as a head coach and first at Miami. He has posted a 475-347 overall record and holds a 448-311 record in D-I games. Coach L was also the head coach of D-II American International for two years.