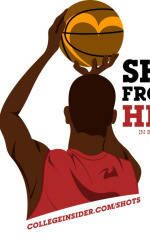 Larranaga Makes 24 Free Throws for Shots From the Heart

Larranaga made 24 of his 25 free throws. He awaits results from Mike Gillian, the head coach of Longwood, who is also Larranaga’s former assistant coach. With a victory, Larranaga will face Travis Ford of Oklahoma State.

Konkol made all 25 of his shots, defeating Chris Kreider of George Mason and moving into the second round of the tournament. Konkol will now compete against the winner of the Jeremy Friel (Albany) and Steve Merfeld (Creighton) matchup.

The event, which also includes a tournament for assistant coaches, will benefit the Skip Prosser Foundation. The former Wake Forest head coach passed away on July 26, 2007 of a heart attack.

Coaches do not have to actually compete against each other on the same court. Each coach shoots 25 free throws at his convenience. A member of the athletic department will tally the results and the coach with the most makes advances. Shots 1-10 are worth one point, 11-15 are worth two points, 16-20 are worth three points, 21-24 are worth four points and shot 25 is worth five points.

“The idea was to create awareness for heart disease through competition,” says CollegeInsider.com co-founder Angela Lento. “We wanted to create something that coaches could have fun with. The fun but competitive nature of this event is something that I am sure coach Prosser would have enjoyed.”

Each round of the competition will take place over the course of one month. This will provide a lot of flexibility for participating coaches. First Round: November; Second Round: December; Round of 16: January; Round of 8: January; National Semi-Finals: February; Free Throw Final: February. The free throw champions will be recognized at the 2012 CollegeInsider.com Awards Banquet in New Orleans, site of the 2012 NCAA Men’s Basketball Championship.

The American Heart Association is also part of the event and is one of the beneficiaries of the Skip Prosser Foundation, which was established in 2011. Skip Prosser spent 21 years as collegiate head coach at Loyola (MD), Xavier and Wake Forest. He made 18 postseason appearances and is the only coach in NCAA history to take three separate schools to the NCAA Tournament in his first year coaching the teams. In 2008 CollegeInsider.com created the Skip Prosser Man of the Year Award, which is given annually to the coach who not only achieves success on the basketball court but who also displays moral integrity off the court as well.