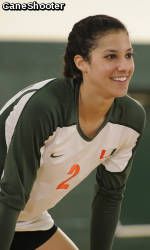 Greensboro, N.C. – University of Miami outside hitter Lane Carico has been named the 2011 Atlantic Coast Conference Volleyball Player of the Year announced Wednesday by Commissioner John Swofford. Joining Carico on the All-ACC Team from Miami are fellow seniors Ali Becker and Katie Gallagher.

Carico, a senior from Manhattan Beach, Calif., becomes the school’s first ACC Volleyball Player of the Year after being named the school’s first AVCA All-America performer in 2010. She was tabbed to the AVCA Third Team after helping the Canes to consecutive NCAA Tournament appearances.

She is also UMiami’s all-time leader in double-doubles, now holding 82 throughout her illustrious career. The three-time AVCA All-East Region performer is the only player in school history to amass 1,000 kills and 1,000 digs in a career.

“I am very happy for and proud of Lane to earn such a prestigious award,” said UM head volleyball coach Nicole Lantagne Welch. “She has had no doubt a special career, driven by her desire to get better each and every day she is in the gym. She has worked extremely hard for everything she has achieved. More importantly though, is that our team and its success so far this year put her in a position to earn it, and that credits all 15 players on our team.”

Throughout the season, Carico was named Pepperdine Asics Classic MVP, Hurricane Invitational MVP and announced to the Preseason All-ACC Team. This is Carico’s third time being recognized to the All-ACC Team, in addition to being tabbed to the All-ACC Freshman Team en route to ACC and AVCA East Region Freshman of the Year accolades in 2008.

Classmate and middle blocker Ali Becker has been ranked in the top 20 nationally and led the ACC in hitting percentage for almost the entire conference slate dating back to late September. For the native of Katy, Texas, this is her first All-ACC Team award.

“Ali, Katie and Lane are very deserving of their All-ACC recognition,” said Lantagne Welch. “They’ve all had tremendous seasons.

“You look at Ali and it has been so fun to see her make this huge jump in her game this season. She has lit a fire in her game that has not only led her to being a key attacker and ranked nationally in hitting percentage, but it has helped to fuel this team.”

Redshirt senior setter Katie Gallagher became the school’s all-time leader in assists in early-November, now holding 5,049 in her career. This is her second All-ACC recognition after being named to the All-Freshman Team in 2007. Gallagher sat out a majority of the 2009 season with injury, earning the Winter Park, Fla. native a medical hardship waiver to compete this season.

“Katie has orchestrated one of the most balanced offenses we’ve ever had at Miami,” stated Lantagne Welch. “Our hitting percentage is ranked nationally, a big credit to work she has put into building this offense and putting our hitters in position to score.”

The Hurricanes led the league in hitting percentage and digs, and ranked in the top ten nationally in assists, digs, and kills per set.

Florida State head coach Chris Poole picked up Coach of the Year honors, while Duke’s Ali McCurdy was voted Defensive Player of the Year and North Carolina’s Cameron Van Noy was tabbed Freshman of the Year.

The season wraps up Wednesday night for six teams as they play their final conference matches. Virginia Tech at Virginia on Friday night and Florida State at Miami on Saturday are the last two ACC matches before the NCAA announces its field of 64 for the 2011 NCAA Volleyball Championship. The selection show will air Sunday, Nov. 27 at 6 p.m. on ESPNU.

“Ultimately, it is team success that is the most important thing to all of us in this program, and we are excited to continue our season on Saturday and next week,” commented Lantagne Welch.